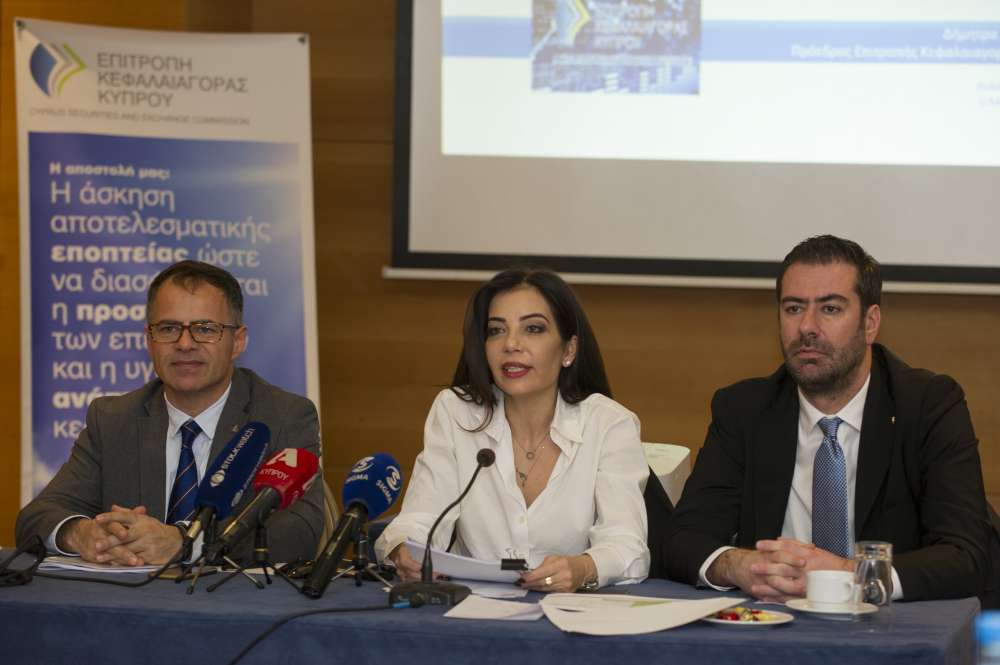 The expanding number and types of regulated entities, their increasing size as well as their increasingly complicated structures and activities, have led to an increase in the workload of the Cyprus Securities and Exchange Commission’s (CySEC), chairwoman Demetra Kalogerou said.

Speaking at a press conference presentingd the Commission’s work in 2018 and its targets for 2019 Kalogerou said that CySEC’s regulatory obligations, both at a national and regional level, are constantly expanding due to the increasingly complex and thorough EU Regulations and Directives, which were recently enforced or will be enforced in due time. In 2019, Kalogirou said CySEC will put emphasis on 2018, on establishing good corporate governance practices and an ethical culture in regulated entities, reflecting the core principles of integrity, transparency and accountability.

CySEC’s Chair said that 2018 was a “challenging year” for investment service providers and supervisory Authorities across Europe, due to the implementation of the sector’s most important EU Directive, the MiFID II, which enhances investor protection and further improves the operation of the financial markets, making them more effective, sustainable and transparent. Furthermore, throughout the year, product intervention measures for retail binary options were imposed, as were intervention measures on the marketing, distribution and sale of CFDs. At the same time, there were significant changes in the EU Anti-Money laundering framework.

Due to these significant changes CySEC focused on enhancing and modernising the regulatory framework governing the securities market. It also focused on monitoring the compliance of regulated entities. CySEC’s Supervision and AML Departments conducted 87 scheduled on-site inspections in CIFs, ASPs and AIFMs, more than 600 desk-based thematic inspections and numerous controls on documents, that the regulated entities submitted to CySEC.

The Surveillance and Investigations Department carried out eight unscheduled inspections in CIFs for suspected violations of the current legislation and completed 16 investigations for regulated entities. CySEC’s chair said that overall, the regulated entities complied, while they also made an effort to implement the provisions of MiFID II.

“However, there were issues pertaining to the interpretation of the new legislative framework and the way it is implemented; issues for which CySEC needs to provide further guidance,” she said.

In the past six years, CySEC has imposed a total of €25.5m in fines on regulated entities. Specifically, the Commission carried out 16 separate investigations, which resulted in the imposition of a total of €18.5m in administrative fines, not only on listed companies but also on executive and non-executive members of BoDs.

“Furthermore, CySEC sent a significant number of verdicts to the Attorney-General, in order to investigate if any criminal offences were committed,” she said.

In the framework of CIFs, ASPs and AIFMs supervision, CySEC imposed fines or settlements of around €7m in the last six years, added Kalogerou, Furthermore, it has suspended the operation of more than 20 investment firms and has closed more than 10 companies. She noted that 8 natural persons “were banned from operating in the sector for a period of up to 10 years, with the period varying depending on each case”.

Kalogerou added that the supervisory work of CySEC’s Departments within the Risk-Based Supervision Framework, will continue and even intensify in 2019. In 2018, the Framework identified new risks, which resulted from factors such as new laws that entered into force within the year and changes in the market environment.

The continuous expansion of the sector

CySEC’s Chair reported that one of the Commission’s main goals is the growth and development of the Cypriot securities market. “CySEC’s supervision mandate has expanded in the past six years, with the inclusion of new regulated entities, such as collective investment firms, mutual fund administrators and administrative service providers”.

Kalogerou clarified however, that the rate of new applications for CIF licences has slowed down in the last two years. On the other hand, the collective investment fund sector has been growing at a satisfactory rate. As she added, in the 4th quarter of 2018, total assets under management amounted to €6.3b, recording a 61% increase compared with 2017 and a 132% increase compared with 2016.

Within the framework of its competences, CySEC actively supports new products, services and infrastructure projects which are supported by financial technology; especially those which can contribute to financing the real economy. This is why, CySEC created an ‘Innovation Hub’ in September 2018, with a view to explore the development and applications of FinTech and RegTech: blockchain, virtual currencies, Crypto Exchanges and DLT.

Since the start of the Innovation Hub’s operations, 21 meetings were completed, with groups of companies from Cyprus and abroad. Some groups are active in the RegTech sector and others in the ICOs sector, while a few of them want to offer innovative products and were interested in obtaining information on whether they can be considered as financial instruments. At this stage, she noted, CySEC is processing three applications.

A need to support CySEC

All of the above, CySEC’s Chair concluded, shows that the Commission’s workload, in the framework of its mandate for adequate market supervision, is huge. However, she underlined, “only with proper supervision, can we ensure market credibility, which is the basic condition for the attraction of new investors and therefore, the further development of the economy and Cyprus’ establishment as a global financial centre”.

It is imperative that CySEC continues to have the appropriate authority and to be further strengthened with the necessary resources, so that it can effectively respond to its very important role as the country’s supervisory Authority.