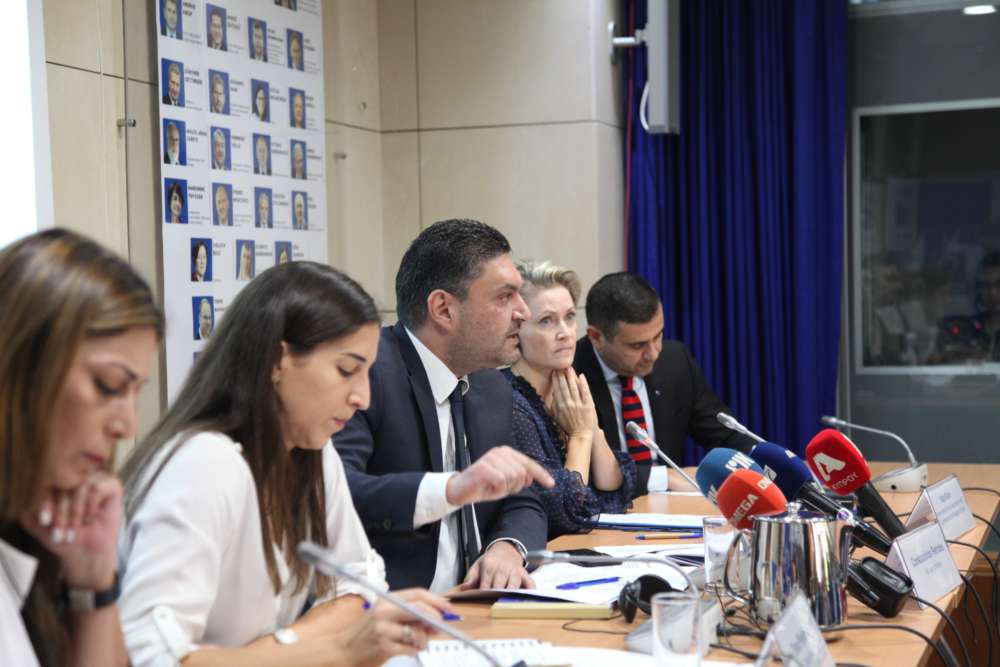 For Zahar Talin’s family from Syria, Cyprus means hope. On a boat from Lebanon with her husband and young daughter, they were searching for a new home. They were lost in sea for three days before they were rescued up by an American vessel and picked up by the Cyprus Port police. “We did not care where we would go, as long as it was land,” she said.

Officials addressing the discussion underlined the need for greater solidarity from the EU from countries in the first line that receive refugees.

Minister of Interior Constantinos Petrides said “migration is the most classic example of European policy failing” and questioned the issue of solidarity as far as the refugee redistribution between Member States is concerned.

He said asylum seekers in Cyprus will exceed 3.5% of the population. “Plus those who have already been offered protection, whether they are refugees or require additional protection. Together with that the percentage in Cyprus is the largest in the EU” he added.

He criticised the anachronistic legislation governing the European legal framework that allows economic migrants to abuse the system.

Speaking at the debate, Petrides added that back in August he sent a letter to the European Commission regarding the redistribution of 5000 migrants so that Cyprus can handle the problem, however, there has been no response. “So how can we talk about solidarity?” he asked.

Outlining the immigration profile on the island, he said first there are people from Syria, although immigration (from Syria) has dropped significantly. He spoke of a new phenomenon that has emerged in the last three years, with “mass arrivals from African countries”. The route, he explained, is by air, first from Ankara, they receive a three-day transit visa to the Turkish occupied areas and end up in the government-controlled areas of the Republic areas seeking asylum. “Not many of them are refugees. It is economic immigrants who abuse or exploit the situation “he said.

There are also those who come to Cyprus legally, work here and before their permits expire, apply for asylum. And those that suffer from these types of illegal immigration are the real refugees who are no longer the majority, he added.

Petrides said the Ministry is taking steps to improve the situation. Cyprus is the first country to bring EASO to the island (European Asylum Support Office), noting that by the end of the year there will be 80 officers assigned to assess applications and reduce the backlog.

Plans are also underway for a second reception centre while Pournara is expanding. The Ministry of Labour is also operating centres for unaccompanied minors.

“You can only integrate so many. But when there is a mass influx, communities are being created”, said Minister Petrides adding that if we continue with the same rate, in five years the number of asylum seekers will rise to 10,000.

Acting head of the Representation of the European Commission in Cyprus, Thea Pieridou, said that the latest information from the European Asylum Support Office, EASO, between January and August 2019, shows that 456,000 asylum applications were submitted in EU member states. That number, she said, is up by 10% compared to the whole of 2018.

Pieridou said the situation remains unstable with the recent geopolitical developments creating new challenges for the EU adding that urgent action is needed to improve conditions in Eastern Mediterranean. The increase in arrivals has put more strain on the already burdened system in both Greece and Cyprus.

Pieridou said the biggest burden is certainly faced by front lines countries, namely Cyprus, Greece, Italy, Spain. “We certainly agree that the European Union must show greater solidarity, both towards these countries and also towards refugees and immigrants themselves. In recent years it has been confirmed that no country can deal with this complex issue on its own. Only by working together to unite our forces can we respond to these global challenges in an effective, humane and sustainable way, ” she said.

The emergency assistance to Cyprus reached € 3.1 mln to increase the capacity of the Temporary Accommodation Centre in Kokkinotrimithia (Pournara).

Since 2014 EU funding for Cyprus has reached almost €100m,  she added. Around €40m have been allocated to Cyprus by the Asylum, Migration and Integration Fund (AMIF), almost €52m by the Internal Security Fund and just over €4m for emergency assistance.

In the EU’s next seven-year budget, the European Commission has proposed an increase in funds for external border management, immigration and asylum to €34.9 billion compared to €13 billion for 2014- 2020.

Andreas Kettis, Head of the European Parliament Office in Cyprus said that the immigration/refugee problem continues to be on top of the Brussels political agenda but also in the agenda of most governments.

He said the key issue is the political will of the governments of EU Member States to fully comply with their legal obligation to show solidarity in the management of migratory flows. By contrast, Europe`s political culture requires international protection for refugees.

Kettis emphasized that the Mediterranean cannot be left to become a cemetery for souls. “The EU as a whole and the Member States individually, must reverse this macabre reality,” he added.

Katja Saha, Representative of the United Nations High Commissioner for Refugees in Cyprus, said that one of the primary goals of the Agency in Cyprus is to help find a durable solution for refugees through their integration into the economic, social and cultural fabric of the Cypriot society.

She said that their integration is an area requiring greater attention in most countries in Europe, including Cyprus and with significant numbers of people afforded international protection on the island, “the need for greater assistance and support to help them integrate has become more apparent”.

Saha said that there is no “one-size-fits-all” approach to integration”, noting that broad goals that apply across countries include enabling refugees reach and develop their full potential, to protect their human rights, to reduce their marginalisation and to foster cohesion and harmonious co-existence. Access to education, to employment, housing and to family reunification are the key ingredients of integration in any society” she said.

“I strongly believe that the Republic of Cyprus has the opportunity to get the integration of refugees, right”, Saha added.

This statement is backed by Zaha. She said that once in Cyprus, they were taken to the Reception and Accommodation Centre for Applicants for International Protection in Kofinou area. The family stayed there for a year and learned English.

Now she is working in a programme of the Ministry of Education for Arab speaking children. She has many friends here. When we first came people thought we were here to make money. We are here only for our child, we are here for hope and to stay alive”, she added.

By In Cyprus
Previous articleCyprus determined to proceed with its energy plans, President Anastasiades says
Next articleFinMin: Cyprus to start process for early repayment of IMF loan