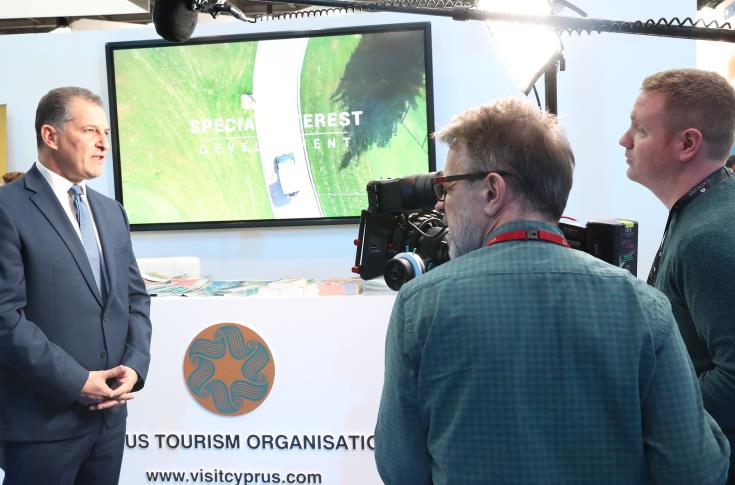 Cyprus is expected to reach 4 million tourists in 2018, with the Minister of Tourism Yiorgos Lakkotrypis speaking of “another exceptional record year.”

He was speaking at the annual World Travel Market, held in London’s ExCel exhibition centre, which opened its gates to tourism professional from around the world.

Cyprus is represented at the three-day long event by tens of co-exhibitors under the umbrella of the Cyprus Tourism Organisation (CTO), headed by the Minister.

On the first day of his official engagements, Lakkotrypis held a meeting with the Greek Minister for Tourism Elena Kountoura and then he greeted the exhibitors that have travelled from Cyprus.

He then had the first series of meetings with airlines and big tour operators to discuss with them the future of their cooperation.

On Monday evening Lakkotrypis will be addressing the annual reception organised by the Ministry, CTO and the High Commission in London.

More meetings with airlines and tour operators are scheduled for Tuesday, before the Minister rounds up his presence at the exhibition with a press conference.

Speaking to the Cyprus News Agency, Lakkotrypis stressed the importance of the World Travel Market: “We all know the importance of tourist arrivals from the UK. They hold even more importance this year, in the light of the ongoing talks on Brexit and what will happen after March 2019.”

He added that he is holding a series of meetings with tour operators and airlines in order to listen to their views about 2019 onwards. “We also want to listen to any risks they might see and what we can all do together to alleviate any negative effect that Brexit might have on arrivals to our country from the UK,” said the Minister.

Asked to comment of this year’s performance in tourism and the outlook for 2019, he said: “2018 is shaping up to be another exceptional record year, during which we will touch the number of 4 million tourists, a number that a few years ago seemed like science fiction. It is even more important because 2018 was a year that all our competitors functioned at the highest possible degree, and that proves that Cyprus can stand competitively against these countries. It is also significant that as from January 2, 2019 the Deputy Ministry of Tourism will begin its operation, having in its focus the application of the 2030 tourism strategy, which will help us proceed with qualitative upgrades of our touristic product.”

The Chairman of CTO Angelos Loizou noted that Cyprus’s exhibiting spaces in this year’s World Travel Market have been revamped, and that there has been a great interest in the country. “There is interest by foreign journalists who want to learn about Cyprus, about our goals, our strategy, the sustainable growth that we are promoting,” Loizou told the Cyprus News Agency.

Corroborating his words is the fact that Lakkotrypis talked about tourism to Cyprus in interviews with Reuters and CNBC.

Loizou also admitted that Brexit is a cause of some concern: “We cannot make plans as we don’t currently know how Brexit will be delivered, whether it will be a hard or a soft Brexit. Whatever the case, however, in our discussions with tour operators and airlines we have said that we will cover any possible problems altogether.”