Cyprus to host first trilateral summit between leaders of Cyprus, Greece and Lebanon later this year 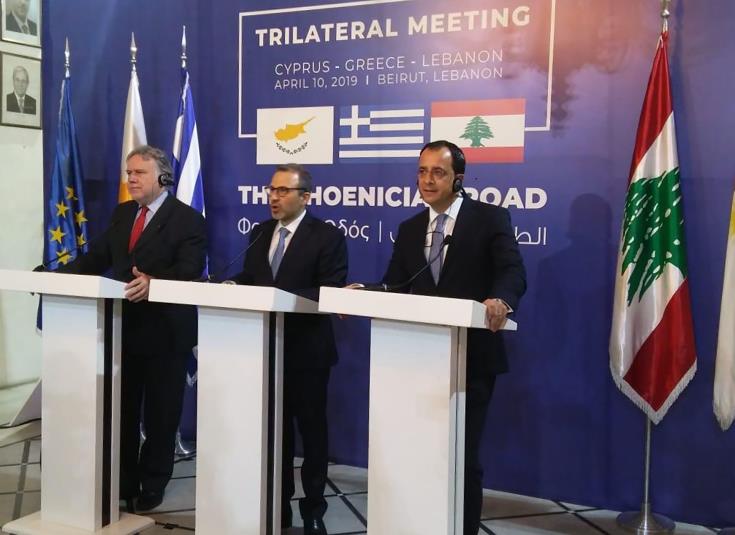 Foreign Minister Nikos Christodoulides announced that Cyprus will host the first trilateral summit between Cyprus, Greece and Lebanon later this year, during which the leaders of the three countries will have the opportunity to review the progress that has been achieved and to map the further development of their cooperation.

According to a press release by the Foreign Ministry, in his statements in Beirut, where he participated in the work of the first official tripartite Ministerial meeting between Cyprus, Greece and Lebanon, together with his counterparts from Lebanon, Gebran Bassil, and Greece, Georgios Katrougalos, Christodoulides, said that it was the official start of the “trilateral journey”, stressing that the three partners would have to work with the aim of making their cooperation tangible in the agreed areas.

Pointing out that the cooperation of the three countries was based on a positive agenda and was not directed against any other country, Christodoulides stressed the Cypriot side’s intention was to turn that promising mechanism into a productive framework of interaction between the three countries and their societies, which would be beneficial for their citizens, especially for the young generation.

He went on to say that he had the opportunity to brief his Lebanese counterpart on the decision to establish a Permanent Secretariat in Nicosia, with the aim of improving the effectiveness and coordination within the tripartite cooperation mechanism with a vision to make the Eastern Mediterranean a region of peace, security and cooperation, despite the many challenges it faces today.

With regard to EU-Lebanon relations, Christodoulides stressed that Cyprus would continue to work and actively assist in further strengthening them, adding that he was convinced that the EU must continue to show keen interest and activity in the region through its neighbourhood policy and its partnership priorities.

In a Joint Statement that was adopted in the framework of the meeting, the three Ministers recognise inter alia, the importance and value of the tripartite cooperation mechanism and reaffirm their strong commitment to further expanding and deepening their countries` cooperation in this context, and to identify synergies in various areas of common interest, to the benefit of the societies and the citizens of the three countries.

According to the Joint Statement, the three Ministers also agree that this tripartite cooperation, as reflected in the shared values, the culture and the heritage of their countries, is based on respect for international law and the aims and principles of the Charter of Fundamental Rights of the United Nations.

The statement also expresses the satisfaction of the three Ministers, for defining the initial priority areas for cooperation, namely Tourism, Higher Education, Culture, Economy and Trade, and illustrates their agreement to submit specific programs fall into these areas before the first Trilateral Summit, which was decided to take place in Cyprus during 2019.

By In Cyprus
Previous articleMPs press for progress on amended dog bill
Next articleMore than 1,200 doctors signed up for NHS