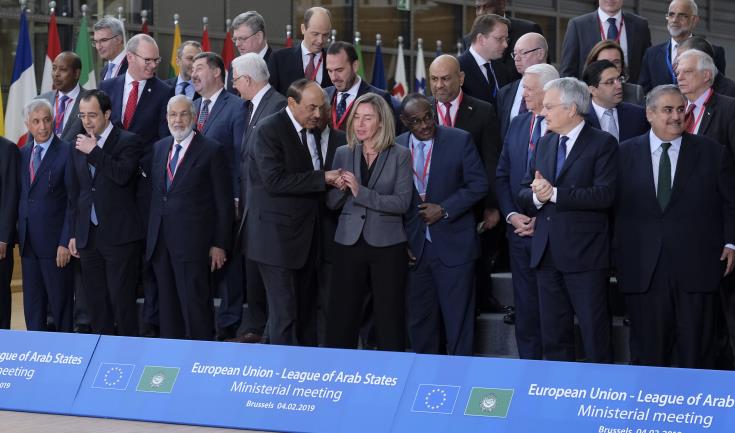 The further strengthening of EU-Arab League co-operation, as well as the preparation of the first EU-LAS Summit to be held on 24-25 February in Sharm el Sheikh, stood at the heart of the EU – LAS Ministerial Conference, just concluded in Brussels, where the Republic of Cyprus was represented by Minister of Foreign Affairs Nikos Christodoulides.

In his speech at the ministerial conference, Nikos Christodoulides stressed that “Cyprus, as the EU Member State at the heart of the Eastern Mediterranean, which has historically and traditionally close ties with its neighbors, has always supported more active involvement and the EU`s engagement in the region as well as the deepening of Euro-Arab cooperation. ”

He stressed that “it is common ground that many of the root causes of the challenges the EU faces today are inextricably linked to developments in the region.”

The Minister, in his intervention, “supported the further strengthening of the EU`s strategic relationship with the Arab League” and stressed that today`s meeting gives us the opportunity to renew our commitment to this strategic dialogue”, particularly in view of the first EU- Association of Arab States to be held on 24-25 February in Sharm el Sheikh.

“Despite any differences or disagreements, at a time when instability is plaguing the wider region and international calls are more pressing than ever, we have to work together towards finding convincing and effective responses to these common calls we are called upon to face”, stressed Nikos Christodoulides.

Nikos Christodoulides, in his speech, made special reference to the strengthening of Cyprus` cooperation with the Middle East and the Gulf, which is also “a key pillar of the country`s foreign policy”, and referred to the tripartite partnerships developed by Cyprus and Greece in recent years with Egypt, Jordan, Lebanon and Palestine.

He even underlined that through these partnerships, “we are developing a positive agenda with these countries, the breadth of which is constantly expanding and deepening.”

“These partnerships, which began with the discovery of hydrocarbons in the Eastern Mediterranean, have evolved into a broad framework of cooperation for the benefit of the countries of the region, the EU and its Member States separately,” the Foreign Minister stressed.

“The Vision of Cyprus,” Christodoulides said, “is that tripartite partnerships will become the vehicle towards a stable and prosperous region in the Eastern Mediterranean, where cooperation and the creation of synergies will be the norm rather than the exception.”

The discussion at the Ministerial Conference focused on international and regional developments, on how to promote peace, security and economic development in the wider region, as well as on the protection of human rights, while ministers exchanged views during the working lunch theme “Multilateral and regional cooperation in response to security challenges in the region”.

In conclusion, the Foreign Minister said that “the cooperation model can still be a tool in the hands of the EU, creating the necessary common ground to meet our common challenges.”

By In Cyprus
Previous articleArrivals of travellers rise by 9.9% in December 2018
Next articleElderly woman dies after Paphos road collision