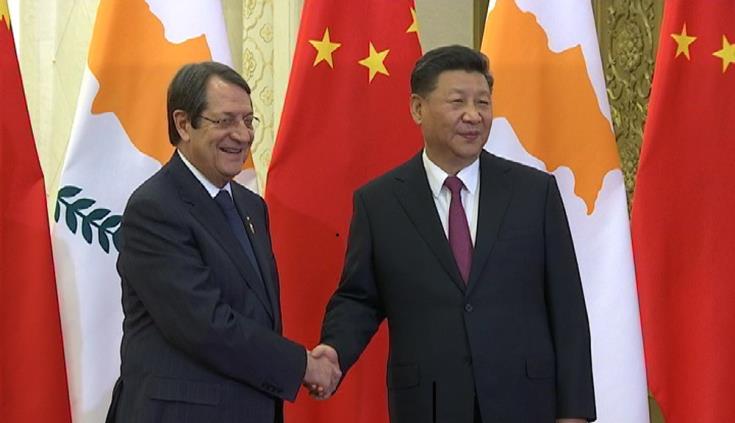 Cyprus is a genuine supporter of a closer Euro-Asian relationship, President Nicos Anastasiades has said, addressing the 2nd Belt and Road Forum, in Beijing.

On his part, China’s President Xi Jinping agreed that Cyprus has “an important geographical advantage,” and expressed the view that by utilising this advantage, and in cooperation with the rest of the states participating in the Belt and Road initiative, «Cyprus will enjoy new opportunities for its own and original development.”

The forum is organised by the government of China with the participation of 40 leaders of state or government, a presidency press release says.

Speaking at the leaders’ roundtable discussion, that took place at the Yangi Lake area, in Beijing, President Anastasiades said the forum “on the one hand symbolises the historic links and connections between the East and the West, the ancient Silk Road, and on the other hand aims at promoting international connectivity, as well as boosting global growth and development for the benefit of our peoples.”

He noted that his government’s “support of the initiative and our willingness to further enrich our cooperation with participating countries, is evident from the signing of a bilateral Memorandum of Understanding with China a couple of days ago, in a vast array of fields under the framework of the Belt and Road Initiative.”

“And taking this opportunity, I wish to stress that Cyprus, is a genuine supporter of an ever-closer Euro-Asian relationship,” he added.

This position, according to President Anastasiades, “arises from our belief that a comprehensive strategic partnership between Europe and Asia in a multitude of areas, based on full adherence to market rules and international norms and standards, will be mutually beneficial and further reinforce economic, trade and investment relations between our two continents.”

“It is for this exact reason that from the very beginning, we had supported the Belt and Road initiative, since we strongly advocate that this project would be to Europe’s best interests and our efforts to achieving sustainable growth,” he noted.

To this end, President Anastasiades continued, “I believe that Cyprus’ location, at the crossroads of three continents – Europe, Africa and Asia – provides an important geostrategic advantage as regards the successful implementation of BRI across all areas of its wide-ranging connectivity, particularly in the energy field, taking into consideration the significant hydrocarbon discoveries of Eastern Mediterranean.”

Referring to a Joint Communique adopted by participants at the forum he said it is “a strong statement of the necessity for a stronger partnership network between us and highlights our acknowledgement that our strategic relations can strengthen our efforts for peace and prosperity around the world.”