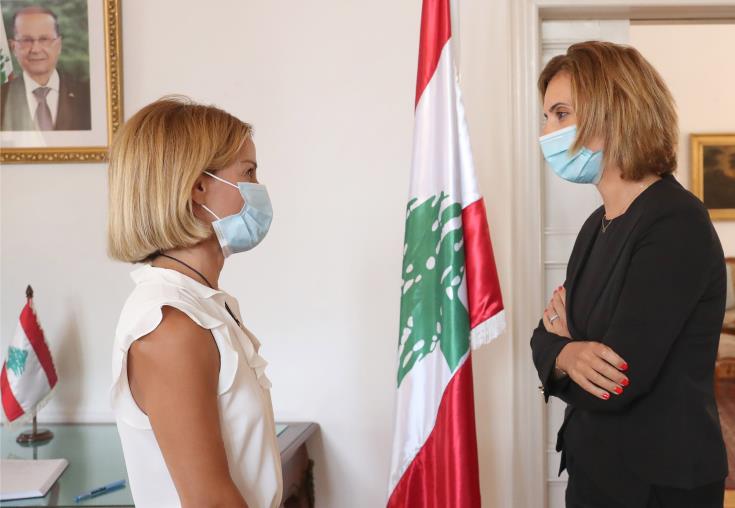 Cyprus Justice and Public Order Minister Emily Yiolitis has said that Cyprus is ready to offer any help that Lebanon requests.

Yiolitis visited on Friday the residence of the Lebanese Ambassador in Nicosia, Claude El Hajal, with whom she had a brief conversation and signed the book of condolence which the Embassy of Lebanon opened after the tragic event of August 4th in Beirut.

In statements to the media Yiolitis said that she personally expressed her condolences to the Ambassador for the disaster that hit her country.

We stand in solidarity with the suffering people of Lebanon. The Police and the Disaster Response Special Unit sent a few hours after the blasts their help to Lebanon and I told the Ambassador that we are ready to offer any other help that Lebanon will need from us, she noted.

Yiolitis also wrote in the book of condolence:

“I wish to offer my deepest condolences to the people of Lebanon for the calamity that has befallen them. Cyprus stands by their side in this plight and we will do whatever we can to help our friends and neighbours recover from this tragedy.

With all my wishes and prayers

Meanwhile according to a press release issued by the House of Representatives, its Acting President Adamos Adamou also signed on Friday the book of condolence at the residence of the Ambassador of Lebanon.

In his message he expressed on behalf of the President and the members of the Parliament sincere condolences to the families of the victims, the people and the leadership of Lebanon and wishes for a speedy recovery of those injured and restoration of the severe damages in the city.

In these crucial times for Lebanon, the message read, Cyprus and its people stand in solidarity by the side of the neighbouring country, with which it is close not only geographically but even more.

It also stressed Cyprus’ readiness to offer any possible support to the people of Lebanon.

By In Cyprus
Previous articleFour-member team of ‘Volunteer Doctors Cyprus’ travels to Beirut Sunday
Next articleCyprus will stand by Lebanon, FM wrote in Book of Condolence