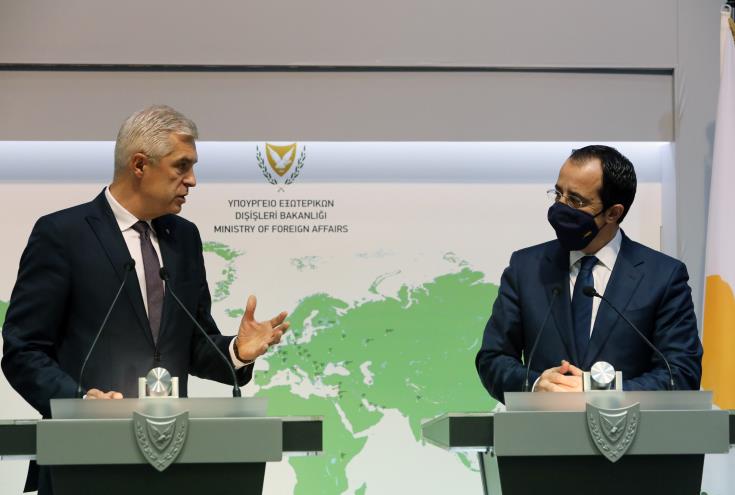 Turkey’s escalating provocations in relation to Varosha, as well as in Cyprus’s EEZ and maritime zones, has been discussed between Cyprus Foreign Minister Nicos Christodoulides and the Minister of Foreign and European Affairs of the Slovak Republic Ivan Korcok, who is paying a working visit to Cyprus.

According to a press release, issued by the Foreign Ministry, Christodoulides in statements after the meeting expressed to his counterpart his appreciation for Slovakia’s unwavering position and indispensable support with regard to the Cyprus problem, as well as for his country’s contribution to the bi-communal dialogue through facilitation of the meetings between Greek-Cypriot and Turkish-Cypriot political parties.

Referring to Turkey’s provocations, Christodoulides stressed that Ankara blatantly disregarding the calls by the international community, continues unabated with its plans to create new fait accompli on the ground. “The international community cannot remain idle, especially at this particular point in time when the Secretary General of the UN is working to prepare the ground for the re-launching of negotiations, from the point where the last process was suspended in Crans Montana”, he pointed out.

From an EU perspective, as the Foreign Minister noted, the European Council Conclusions adopted by the Leaders at the beginning of October expressed the Union’s readiness to set EU-Turkey relations on a positive footing, provided of course that Ankara stops violating the sovereign rights of the Republic of Cyprus, abstains from similar actions that breach International law in the future and ceases all illegal activities vis-à-vis Cyprus and Greece.

In those same conclusions, Christodoulides went on to say, the Council has additionally made it clear that it expects Turkey to support the speedy resumption of negotiations to resolve the Cyprus problem, under the auspices of the UN, and to remain committed to a comprehensive settlement within the UN framework and in accordance with the relevant UNSC resolutions, and in line with the principles on which the EU is founded.

“To date, Turkey’s response unfortunately has been at best disparaging on all fronts towards the EU. The European Council will assess the situation during its meeting on 10th and 11th and take decisions as appropriate”, he said and thanked Slovakia, and the Foreign Minister in particular, for the clear positions they have articulated at every occasion, on the need for the EU to act appropriately and effectively when its Member States are facing external threats and challenges.

Christodoulides also stated that during today’s meeting, they discussed a number of issues that are part of the bilateral dialogue. “We also of course exchanged views on current issues from our European agenda, as well as on regional and international affairs and developments that are of common interest and concern”, he said.

Christodoulides said that they agreed that it is essential to take concrete steps in creating additional opportunities and possibilities for the people of our countries to benefit. “We therefore reaffirmed our willingness to finalise negotiations on pending bilateral documents in the areas of security and defence, as well as in education, and to work together for the re-establishment of direct flights between Cyprus and Slovakia, as soon as conditions allow, as these will nurture people to people contacts and increase bilateral cooperation in fields such as tourism, business and trade”, he stated.