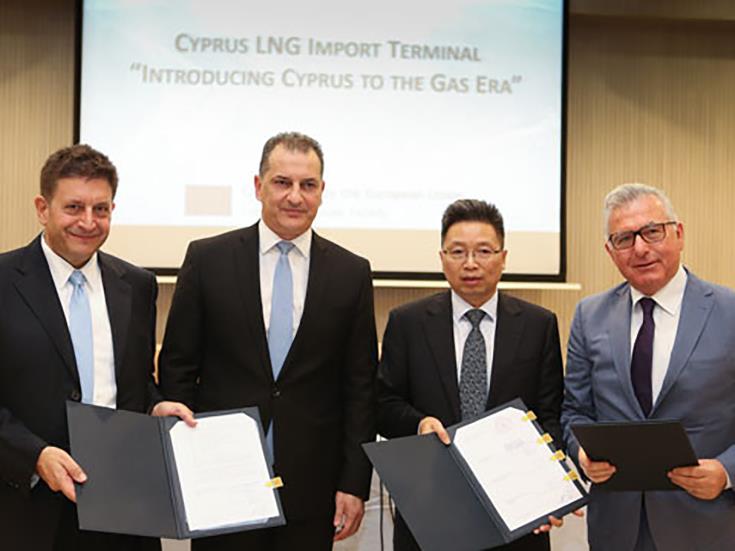 Cyprus and a consortium led by China Petroleum Pipeline Engineering Co Ltd on Friday signed a contract for the construction of the nearly €300 million infrastructure for the import of liquified natural gas (FSRU) for electricity generation, a project described as the biggest ever in the field of energy in Cyprus.

The LNG Terminal will include a floating storage and regasification unit (FSRU), a jetty for mooring the FSRU, a jetty borne gas pipeline and related infrastructure.

The project, estimated at €290 million has secured a €101-million grant from the EU under the Connecting Europe Facility (CEF) financial instrument, while the Cyprus Electricity Authority will contribute €43 million securing a 30% stake at ETIFA. Furthermore, ETIFA will cover the remaining part of the cost with funding from international lenders such as the European Investment Bank and the European Bank or Reconstruction and Development, with state guarantees. The infrastructure’s operational expenditure (Opex) are estimated at €10.5m a year.

Furthermore, DEFA has launched an additional tender for the LNG supply, attracting expression of interest from 25 suppliers, among the most dominant in the global LNG market. DEFA intends to import 0.6 bcm of LNG through Gas Sale – Purchase Agreements (GSPAs) with duration between three to four years, maintaining the option to purchase LNG also from SPOT markets.

Addressing the signing ceremony, Energy Minister Yiorgos Lakkotrypis said the introduction of natural gas in the Cypriot market serves the government’s plans to achieve the security of energy supply, to diversify Cyprus’ energy mix and to promote competition in the electricity market, fostering the reduction of electricity prices of business and households.

Recalling that Cyprus had three unsuccessful attempts to import natural gas in the past due to its small size and low energy needs, Lakkotrypis said securing a deal was made possible due to the separation of the contract in two, one for infrastructure construction and one for LNG supply.

The Cypriot Minister said that according to studies, with the use of natural gas, Cyprus’ environmental footprint will decline by 25% to 30% compared with the current fuel used for electricity generation, while based on conservative assumptions electricity generation cost savings will range between 15% to 25% in the period of 2022 – 2025.

Symeon Kassianides, DEFA Chairman said the signing of the contract marks Cyprus’ transition to a new era with the use of cleaner source of energy for the industry and electricity generation and energy efficiency.

He added that the project is expected to be completed between end-2021 or early 2022.

On his part, Duan Bingquan Deputy Managing Director of China Petroleum Pipeline Engineering, said it is a great honour for the corporation to partner with the remaining consortium participants for this significant project.

This is a significant project that ushers Cyprus into the natural gas era, he said.