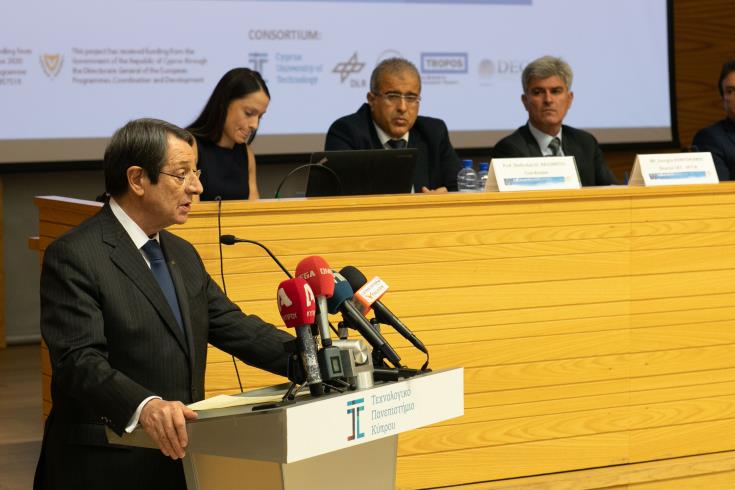 In his speech, President Anastasiades said that, “despite the extremely competitive process, the EXCELSIOR Project has successfully secured the EU Horizon 2020 funding,” and thanked the European Commission for this decision, in addition to the funding of five other Centres of Excellence in Cyprus.

“This constitutes further evidence of the competitiveness Cyprus enjoys in the field of research and innovation, both at European and international level,” he said and assured that “it is a situation that the Government aims to strongly support and further develop, through a coordinated effort, in the framework of our new national Strategy for Research and Innovation 2019-2023.”

He said that, “within this context, the Republic of Cyprus will award 15 million euros to each of the six Centres of Excellence covering a period of 15 years, a funding which will enable our country upgrade its prospects for innovative research and entrepreneurship, while creating new employment opportunities for high-level scientists and researchers.”

“Our Government has set out bold and ambitious targets, aimed at enabling Cyprus to become a dynamic and competitive economy, driven by research, scientific excellence, innovation, technological development and entrepreneurship,” he noted.

The President noted that “the decision to establish a National Board for Research and Innovation as the primary advisory body, as well as the assignment of the new role of the Chief Scientist to drive research and innovation forward, are some of the most significant steps taken by the Government towards this direction during the past year.”

“Furthermore, the establishment of a Deputy Ministry of Innovation and Digital Policy marks a new era for these fundamental areas in Cyprus and will further enhance efforts for an integrated governance model,” he said.

He assured that “all competent authorities, in close collaboration with the EXCELSIOR Consortium, will provide any assistance deemed necessary in order to develop the Eratosthenes Centre of Excellence into a world class Research and Innovation Hub for Earth Observation, a reference Centre in Europe, the Eastern Mediterranean, the Middle East and North Africa,” adding that, “as a Government, we consider the Eratosthenes Centre to be instrumental in transforming Cyprus into a regional hub for research and development.”

President Anastasiades congratulated the Cyprus University of Technology, the Ministry of Transport, Communications and Works, and the three world-renowned partners of the EXCELSIOR Project, and conveyed his deep appreciation for their determination and efforts to submit such an exceptional proposal, ranked in one of the top positions.

The Cyprus University of Technology coordinates the programme, which opened on October 1, 2019. The project has received a funding of €38 million and aims at carrying out high level basis and applied research in sectors dealing with the observation of Earth through space technology and remote sensing.

By In Cyprus
Previous articleUK Labour Leader Corbyn: I would stay neutral in a second Brexit referendum
Next articleCyprus and CTBTO sign MoU in seismology