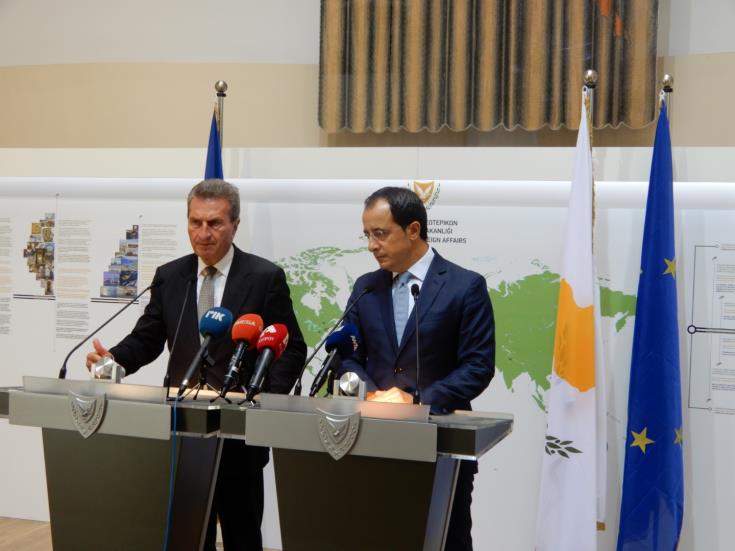 Cyprus has requested increased funds from the next multiannual budget for 2021-2027 in a bid to face challenges stemming from its small territory and its status as an island-state in the periphery of the EU, Minister of Foreign Affairs Nicos Christodoulides said on Monday.

Christodoulides met Monday with European Commissioner for Budget and Human Resources, Günther Oettinger who visited Cyprus to discuss the next EU multiannual financial framework (MFF) for 2021-207.

On his part Oettinger expressed satisfaction over Nicosia’s general support to the Commission’s proposal and timeframes concerning the new MFF and added that he could support Cyprus’ request for increased assistance in certain financial envelopes that are relevant to Cyprus.

“I don’t see fundamental differences, I am willing to help and to come into some files being relevant for Cyprus but I don’t see fundamental differences so I am happy Cyprus is supporting in general the Commission’s proposal and it is supporting our timing coming to a decision before the end of the year,” Oettinger said in joint statements with Christodoulides.

The German Commissioner also said that Cyprus supports the Commission’s formula for increased contribution by EU member-states in combination with reduced financial programmes to cover the gap left from the exit of the UK from the EU.

In his remarks Christodouldes praised Oettinger and his team work to achieve agreement on the next MFF especially given the tough timeframe.

“In this regard, I would like to reiterate that Cyprus has been one of the strongest advocates of reaching an agreement on the MFF by the end of the year, in the spirit of the relevant European Council’s conclusions of June 2019,” Christodoulides said, noting that “we are of the opinion that any delay could impact negatively on the timely initiation of programmes and projects, sending the wrong political message about Europe’s capacity to deliver on time.”

The Cypriot FM said that Cyprus has submitted a request both to the European Commission as well as to the Finnish Presidency, for additional assistance through the new MFF.

“This request emanates from and reflects the unique challenges that Cyprus is faced with due to a combination of factors, namely the small size of our country’s territory, the fact that unlike most of its EU partners Cyprus is an island State, that is situated on the periphery of the Union,” he explained.

Concluding, Christodoulides said he was optimistic that with Oettinger’s support “that Cyprus will be allocated appropriate and sufficient resources in the next MFF to face these challenges, as was the case in the current MFF.”

By In Cyprus
Previous articleLavrentis Machairitsas last ever concert in Cyprus (video)
Next articleVehicle registrations down by 7.7% in January – August 2019