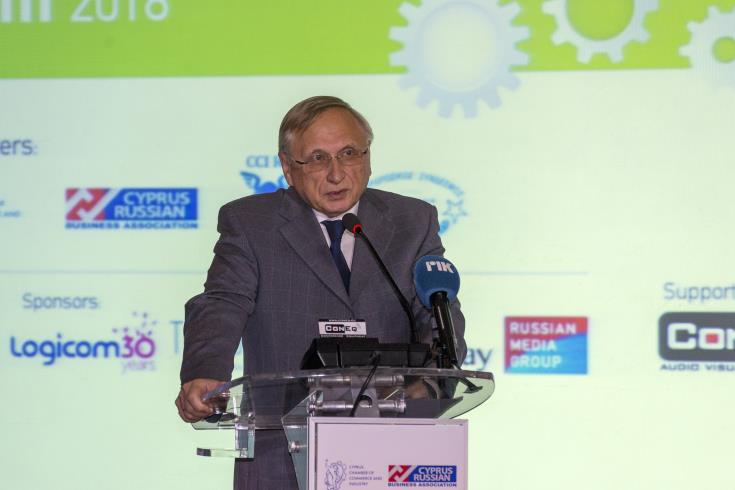 Relations between Cyprus and Russia are at a very good level, has said Russian Ambassador to Cyprus Stanislav Osadchiy, adding that the recent statements by MFA Spokesperson regarding a US military buildup in Cyprus mainly concerned the United States, not Cyprus.

Tass reported last week that Russian Foreign Ministry Spokeswoman Maria Zakharova told journalists that Moscow will have to take response measures in case of a military buildup by the US in Cyprus.

Asked to comment on the matter, on the sidelines of a meeting with Limassol mayor, Osadchiy said he could not comment on a statement coming from someone higher in the rank. “I would not be a good diplomat” he said, noting however that “what Zakharova said mainly concerns America, not Cyprus.”

The Ambassador also said that relations are “at a very good level and continue to develop further.” Asked if the crisis is diffused, the Ambassador replied “yes, the crisis comes and goes.”

The Ambassador was also asked about his recent statements at the Russia-Cyprus Business and Investment Forum, in Limassol, where he referred to problems that led to the closing of Russian bank accounts and the withdrawal of Russian companies from the island.

Addressing the Forum in mid-November, the Ambassador mentioned the shutdown of shell-companies, as well as EU sanctions among the developments raising concerns in Russian business circles, both in Cyprus and in Russia.

“Russians are patient, we wait and I think everything will be OK” Osadchiy told reporters, adding that “we have been through many crises and we will overcome this as well.”

By In Cyprus
Previous articleTurkish Cypriots assess damages after last week’s floods (video)
Next articleAntisemitism is on the rise, EU survey finds