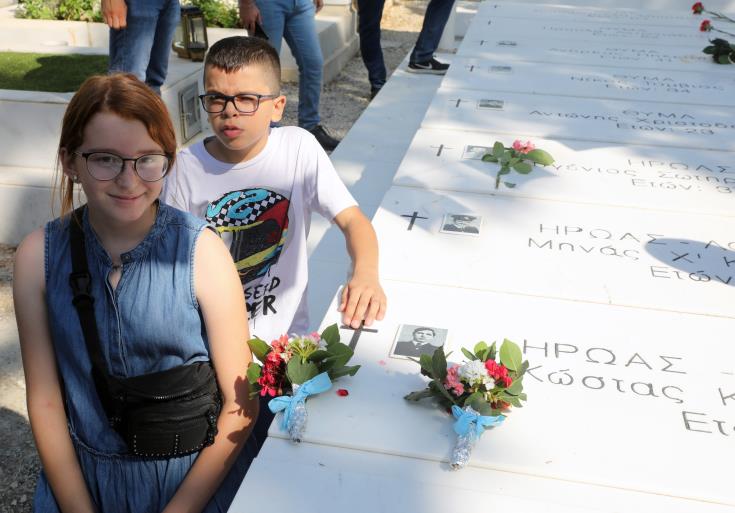 With references to the escalation of Turkish provocations, and the need to draw lessons from the past, the House of Representatives held a extraordinary session marking the anniversaries of 1974 coup and the Turkish invasion.

A minute’s silence was observed for those who lost their lives in defence of democracy and freedom at the beginning of the session, which was also attended by President of the Republic Nicos Anastasiades and members of the Cabinet.

“For another year we pay tribute to all those who heroically sacrificed themselves, to defend the democracy and freedom of Cyprus, the constitutional order and our homeland, but we also honour the relatives of our missing, our enclaved and displaced from the Turkish army,” he said.

The House of Representatives, he said, reaffirms its determination to continue the struggle until the final vindication of our people, Greek Cypriots, Turkish Cypriots, Armenians, Maronites and Latins.

Our demand, he added, “is a more active and substantial involvement of the European Union, so that Turkey can consider the costs and consequences of its provocative arrogance and intransigence, which undermine the efforts to resolve the Cyprus issue”. He also noted that Europe still has to deal with Turkey`s general revisionism against neighbouring countries and the entire region.

Another example of this policy, he said, is the decision to convert Hagia Sophia from a museum to a mosque. He added that the House of Representatives unites its voice with the rest of the international community, strongly condemning this action, which violates the values of tolerance and respect for religious and cultural pluralism.

“We call on the international community to react decisively, putting pressure on Turkey, both to cancel its plans for Hagia Sophia and to change its uncompromising stance on the Cyprus issue,” said Syllouris.

Turkey`s provocative stance, he added, “will not distract us from the effort to resolve the Cyprus issue peacefully and get rid of the occupation and foreign interventions.”

Following the church memorial service, wreaths were laid at the tombs of those killed defending the Republic

On 15 July 1974, the Greek military junta and its Greek Cypriot collaborators carried out a coup against the democratically elected President of Cyprus.

The coup provided Turkey with a pretext to launch an invasion against the defenceless island, which is only 75 kilometres south of Turkey. In a two-phase military intervention in July and August, and despite calls from the UN Security Council [Resolution 353 (1974)] for the quick restoration of constitutional order on the island, Turkish troops advanced and occupied 36.2% of the sovereign territory of the Republic and forcibly expelled about 200,000 Greek Cypriots from their homes. Another 20,000 Greek Cypriots, who remained in the occupied areas, were also forced to eventually abandon their homes and seek refuge in the safety of the government-controlled areas. Today, fewer than 500 enclaved Greek Cypriots remain in the occupied areas.

The pretext Ankara used to justify its military invasion was that it had to offer security to the Turkish Cypriot population on the island, which made up 18% of the total population.

Cyprus has been divided since 1974, when Turkish troops invaded and occupied its northern third. The latest round of UN-backed negotiations for a solution took place in the summer of 2017 in the Swiss resort of Crans Montana but failed to yield any results.