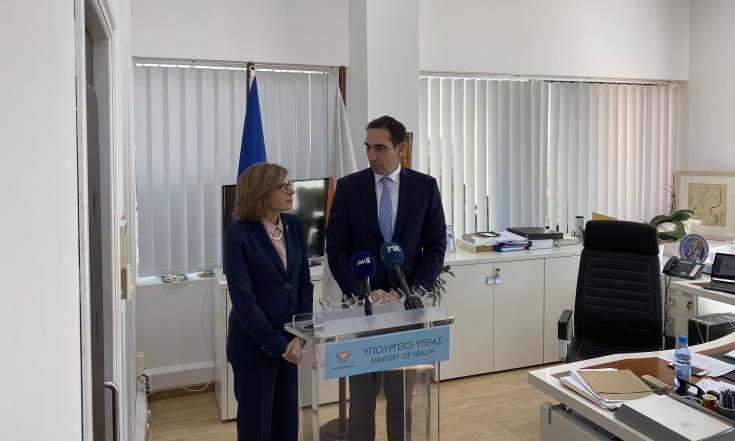 Cyprus is ready to deal with the consequences of Brexit and there will be no problem when it comes to pharmaceutical imports from the UK, Cyprus’ Health Minister Constantinos Ioannou assured on Friday.

He was speaking after a meeting with Stella Kyriakides, the European Commissioner responsible for Health and Food Safety, at the Ministry of Health, in Nicosia, in the framework of the Commissioner’s first official visit after assuming her duties in the von der Leyen Commission.

During the meeting, the two sides also discussed vaccine coverage, the use of antibiotics and the strategy for cancer.

Ioannou said that his Ministry is ready to contribute to Kyriakides’ efforts, noting that “the Commissioner’s success is also a success for Cyprus.”

Asked about preparations to face the consequences of Brexit on pharmaceutical imports from the UK, the Minister said that “all necessary actions have been taken and we will face no problems” adding that his Ministry is on alert.

The Minister also referred to the exports of pharmaceuticals from Cyprus, noting that the industry is important for the country, acounting for 2%-2.5% to its GDP. He went on to say that his Ministry’s responsibility is to assist these companies’ export activity and referred to the recent example with Egypt, whose market opened up to Cyprus two months ago.

Ioannou also noted that the Commissioner’s priorities are also high in his Ministry’s goals and referred to a number of issues, including vaccination coverage, medical equipment and antimicrobial resistance.

He said that Cyprus has a high level of vaccination coverage but more needs to be done. This issue is covered in the framework of the General Health Scheme, through pediatricians, the Minister noted.

Asked about medical coverage of migrants, Ioannou said that they are covered in reception centres on a daily basis, and the cost is borne by the state.

In her statements, Kyriakides said that the beginning of consultations on the EU cancer plan will be announced on February 4, in Brussels.

Speaking about children’s vaccinations, the Commissioner said that “there is a good level in Cyprus, but there should be no complacency about it.” She added that the mater is being handled at a national level and noted that there is a lot of disinformation.

Kyriakides also said that they discussed with the Minister the overuse of antibiotics and said that the Commission’s services are at the Ministry’s disposal to draw up an action plan, in order to deal with this problem.

Agriculture Minister to raise halloumi issue with the new European Commission
——————————————-
Earlier on Friday, the Commissioner also met with the Minister of Agriculture Costas Kadis, who said that he intends to raise again the issue of halloumi cheese with the new Commission in a concerted manner, hoping for this matter to reach a conclusion. The cheese produced in Cyprus is set to receive Protected Designation of Origin status.

This issue is pertinent to a number of portfolios and there should be concerted action, Kadis said in reply to a question.

Kyriakides noted from her part that she will have contacts with the Ministry of Agriculture and Commission services, in order to see how to resolve this matter.

She said moreover that the issue of halloumi is a complex one, involving many dimensions  and that a new effort begun to overcome  the existing problems.