Cyprus ranks 44th in the WEO Global Competitiveness Report for 2019 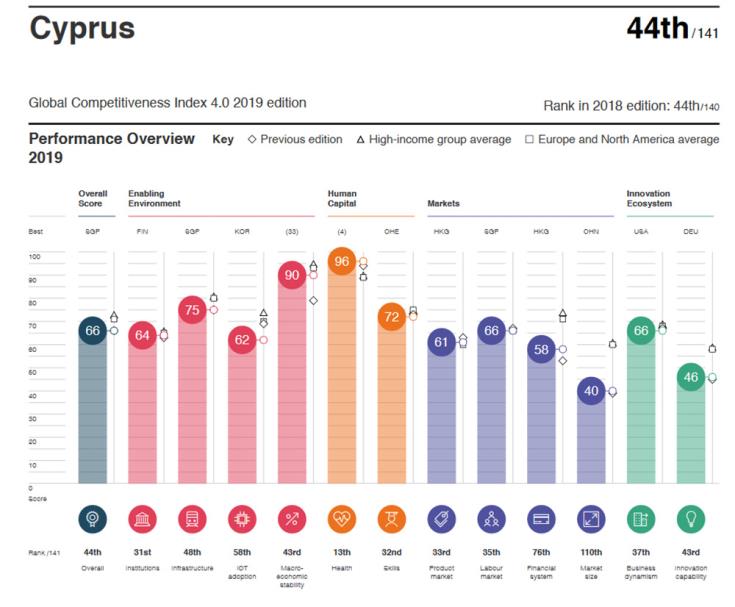 Cyprus ranked 44th in the World Economic Forum’s Global Competitiveness Report for 2019, marking a marginal increase in its total score.

Singapore ranked 1st out of 141 countries, overtaking the USA which fell to No 2.

The index is organised into 12 pillars, reflecting the extent and complexity of the drivers of productivity and the competitiveness ecosystem, the report said. These are institutions, infrastructure, ICT adoption; macroeconomic stability, health, skills, product market, labour market, financial system, market size, business dynamism and innovation capability.

Cyprus ranked 44th, the same position as in last year’s report with a total score of 66.5 points, 0.8 points more compared with its previous performance.

In the pillar of macroeconomic stability Cyprus climbed to the 43rd spot from 63rd last year with a total score of 90 points compared to 78.9 the year before, while in health Cyprus jumped in the 13th place from 26th last year mainly owing to the introduction of the national health scheme.

In the pillar of skills, Cyprus lost gained one spot climbing in the 32th place from 33rd last year with total score marking a marginal improvement. Cyprus’ position in the pillar of product market declined in the 33rd place from 26th in last year’s report.

In labour market, Cyprus dropped to the 35th position from 28th last year with total score declining to 66.1 from 66.9 last year.

Cyprus recorded significant improvement in the pillar for the financial system, securing 76th place from 95th last year, with total score rising to 58.2 points from 53.3 in previous report.

With regard to market, size, Cyprus remained at the 110th place, the same as last year with a marginal improvement in the overall score.