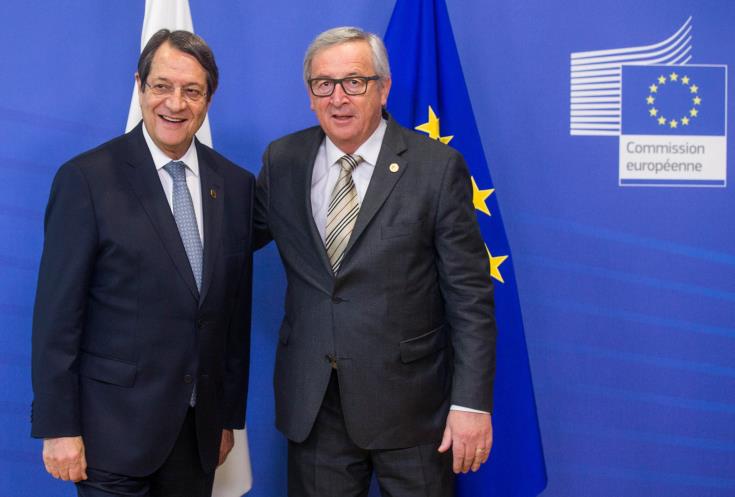 President Anastasiades stressed on Thursday that the Cyprus problem is in effect a European problem, an open wound for Europe, noting that  healing this European wound will contribute significantly to a stronger Europe, also in light of the huge prospects in the energy field.

“Reunification, a viable, functional and lasting solution that safeguards Cyprus’s independence and sovereignty based on the UN Security Council Resolutions and the EU acquis, principles and values, will allow it to further develop its role as an anchor of stability in the Eastern Mediterranean and as a bridge between the region and Europe benefiting all Europeans,” Anastasiades told the European People`s Party (EPP) congress in Helsinki.

Anastasiades said that  “as we endeavor to ensure peace, security and prosperity in Europe and our wider region, we must not forget that the European Union was founded on principles to safeguard peace, our way of life, democracy and prosperity, equality and human right”

“What happens on the eastern and southern regions has a direct impact on us. And as the President of the Republic of Cyprus, which still endures occupation of 37% of its territory and flagrant violation of the fundamental freedoms and human rights of its citizens, either Greek or Turkish Cypriots, by Turkey contrary to international and EU law, I need to press on the importance of reunifying the EU’s last divided Member State,” he stressed.

The President of Cyprus said he was grateful  “for the EPP’s long standing, strong  support to our efforts to find a fair and lasting solution to the Cyprus problem and I would like to express my appreciation for the renewal of this support by the resolution on the Cyprus problem) adopted last night.”

He noted that “ahead of us, as leaders of EPP, a group whose roots run deep in the history of the European continent, we have demanding challenges. We are therefore bound to demonstrate leadership, commitment and determination.”

Anastasiades stressed that “a strong and united Union based on principles and values of the founding treaties must remain the epicenter of all our policies and actions,” adding that “being strong and united, despite the periodical turbulences resulting from either financial crisis, Brexit or the migration crisis remains the best avenue to safeguarding all principles and values that this Union historically stands for: promoting peace, security, solidarity and prosperity to its people.”

Referring to the unprecedented humanitarian migration crisis, Anastasiades said that “proportionally to its size, Cyprus suffers a huge burden due to its geographical location.”

Dealing with the rise of violent extremism, terrorism, hybrid challenges and conventional threats we must accept the need for contributing as a Union more to our own security, reinforcing our strategic autonomy to be able if necessary to act alone or/and, preferably, with partners, he added.

Moreover he referred to the challenges in the economic sector and as regards climate change.

“My main message today is that, with respect to our principles, we must ensure and safeguard the strength and unity of the European Union, while remaining relevant, effective and faithful to our citizens’ needs and concerns,” Anastasiades said.

“Let us convince them that the EPP policies and their role are crucial, and that together we can work to tackle all the challenges we face. And I have no doubt that in doing so we will win next year’s elections,” he concluded.