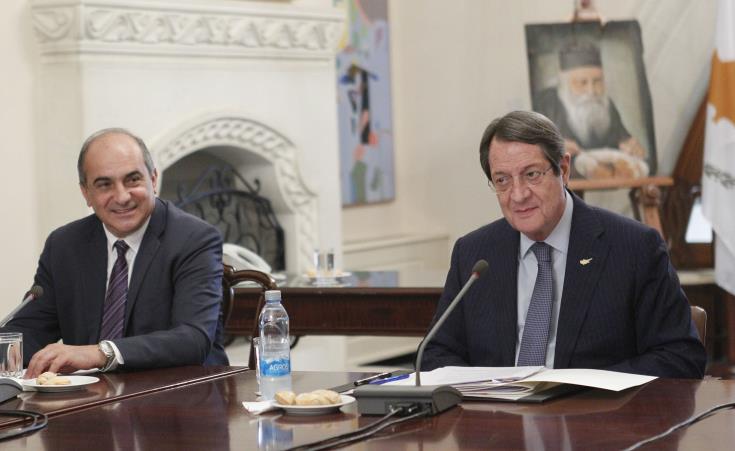 The President of Cyprus Nicos Anastasiades seeks the resumption of settlement talks under the rights terms, Government Spokesman Prodromos Prodromou has said.

He was speaking on Monday at the Presidential Palace, after the end of a National Council session, which lasted for about 2 hours.

Prodomou said that the meeting of the top advisory body to the President on the handling of the Cyprus issue was constructive, and the President informed political leaders about his October 26 meeting with the Turkish Cypriot leader Mustafa Akinci and his October 31 meeting with Jane Holl Lute, the envoy of the UN Secretary-General. Moreover, the President also informed them about the process to conclude the terms of reference, the Spokesman added.

In his report, last October, the UN Secretary General Antonio Guterres asked the parties to agree, the soonest possible, on the terms of reference for the resumption of substantive negotiations.

Party leaders also expressed concern during Monday’s session, with Prodromou saying that the President shares some of these and underlines the need for good preparation.

Asked what the terms of reference may contain, the Government Spokesman said that these terms will become more specific once the process resumes and a new meeting with Lute is arranged.

He noted, however, that it is not yet known when the UN SG envoy is returning to Cyprus.

Asked if this means setting a timeframe, he replied that “there is no such information” and added that President Anastasiades aims at reaching an agreement the soonest possible.

When asked about the process to define the terms of reference, Prodromou said that “we await the next meeting with Lute in order to learn things that we dont know yet.”

He said moreover that the positions which the Greek Cypriot side will submit “are well known.”

Prodromou was also asked about the opening of crossing points and said that “the conditions set have been met” about the fact that there should be no military presence in the vicinity.

He also noted that the Greek Cypriot side is ready to proceed with another Confidence Building Measure enabling cell phones to operate throughout the island, as long as no technical issues arise pointing to different political aspirations. We may have cell phone interoperability If the suggestions of the Greek Cypriot are adopted, he noted.

Asked finally about energy developments, the Government Spokesman said that it is in Cyprus’ interest to remain self-composed and act with restraint.

The energy programme of the Republic of Cyprus is already being implemented and we don’t need to engage in a publicity game that does not contribute to its success, Prodromou concluded.