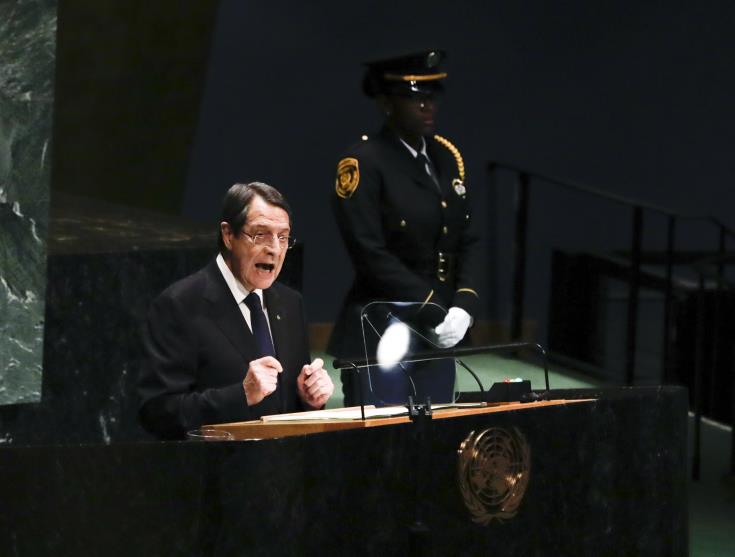 Cyprus President, Nicos Anastasiades, rejected on Thursday, while addressing the UN General Assembly, allegations made by Turkish President Recep Tayyip Erdogan that the Greek Cypriot side refuses to share the political power and prosperity with the Turkish Cypriots, and outlined his vision and the vision of the people of Cyprus to end the unacceptable status quo with a state which will ensure a common and prosperous future for the coming generations of Greek and Turkish Cypriots, pledging not to deviate from pursuing this vision.

Moreover, Anastasiades said that regrettably, whilst the efforts of resuming the negotiating process are underway, recent actions by Turkey not only violate international law, but severely undermine the aim of having a conducive environment for meaningful negotiations, and stressed that he will not accept the gun-boat diplomacy, blackmail tactics and the attempts to force the Greek Cypriot side to negotiate under duress.

The President wondered if it is possible for the efforts of the UN Secretary – General to succeed while Turkey is violating the sovereign rights of the Republic of Cyprus in its internationally recognised exclusive economic zone and continental shelf and amid recent public statements and acts by Turkish officials, signaling to plans for settling the fenced area of Varosha, the uninhabited part of Famagusta, under illegal Turkish military occupation.

The President noted in his speech that during the last 45 years “we are undertaking the same positive initiatives in order to end the unacceptable status quo and achieve lasting peace and stability in my homeland”, adding that “despite the sincere efforts and the constructive engagement of both mine and my predecessors towards finding a just and fair settlement, Cyprus remains the last European divided country.”

Referring to the new effort underway for the resumption of the negotiations, Anastasiades stressed “in the strongest manner my full dedication and support to this new effort of the UN Secretary – General to resume the process from where it stopped at Crans Montana.”

He went on to say that in this context and following a call from the Secretary – General for an agreed basis for the resumption of negotiations, there is an understanding by the leaders of the two communities that the relevant “Terms of Reference” should comprise the following elements:  The Joint Declaration of 11 February, 2014, which sets out the basic guidelines and principles for the framework of the sought after solution, as well as the methodology of the negotiating process; The convergences achieved that had led to holding the Conference on Cyprus at Crans Montana, and;  The six-point framework of the UN Secretary – General on Security and Guarantees, Troops, Effective Participation, Territorial adjustments, Property and Equitable Treatment, as presented on June 30, 2017 at Crans Montana.

Anastasiades stressed that such an understanding could pave the way forward for the resumption of talks with the sole aim to reach a comprehensive settlement on the basis of what has been agreed as a historic compromise by the Greek Cypriot side, “the evolution of the Republic of Cyprus into a bi-zonal, bi-communal federation with political equality, as set out in the relevant Security Council Resolutions and the High Level Agreements, with a single sovereignty, a single international legal personality and a single citizenship.”

“A settlement that will establish a viable, functional and lasting federal State, free from foreign dependencies, foreign troops and rights of intervention by third countries. A settlement that will not deviate from the relevant Security Council Resolutions and the EU values and principles. And I want to send a clear message: The United Nations and the Secretary – General’s Good Offices Mission is the only way forward for us,” he pointed out.

Anastasiades said that “regrettably, whilst the efforts of resuming the negotiating process are underway, recent actions by Turkey not only violate international law, but severely undermine the aim of having a conducive environment for meaningful negotiations”, adding that “while I do not intent to embark on a blame game, yet, I am not allowed, and the dignity of our people dictates not to do so, to accept the gun-boat diplomacy, blackmail tactics and the attempts to force our side to negotiate under duress”.

As regards Varosha, he stressed that its distinct status was recognised in all reports of the Secretary General and the UN operations in Cyprus. More specifically, as he noted, the framework for the resettlement of Varosha by its lawful inhabitants under UN auspices was set as a priority, both by the 1979 High-Level agreement between the leaders of the two communities and the UN Security Council Resolutions 550 and 789.

In this regard, we deeply appreciate the recent reaffirmation by the UN Secretary – General that the position of the United Nations on the matter remains unchanged and guided by the said Security Council Resolutions, the President said.

Anastasiades also noted the “increasingly aggressive positioning of the Turkish military” and “the escalation of violations in the buffer zone,” noting that “all these developments make the role of the UN Peacekeeping Force in Cyprus and the fulfilment of its mandate more necessary than ever.”

With regard to the Turkish President’s allegation that the Greek Cypriot side refuses to share the political power and prosperity with the Turkish Cypriots, he wondered if the Greek Cypriots refuse to share political power and prosperity with the Turkish Cypriots, when “we have accepted political equality as defined by the Secretary – General and upheld by Security Council Resolutions, the Greek and Turkish Cypriot communities, within the context of the negotiating process, reached an agreement on the issue of natural resources, in line with the UN Convention of the Law of the Sea, we have also conveyed our readiness, always within the framework of meaningful negotiations, to deposit revenues accrued from the exploitation of hydrocarbons to an escrow account for the Turkish Cypriot community.”

“An escrow account through which we are protecting the rightful share of the Turkish Cypriot community, in accordance with the population ratio of the future constituent states,” he added.

Moreover, referring to Erdogan’s claim that Turkey has a reasonable approach on the issue of energy resources and that they will protect the legitimate rights of the Turkish Cypriots until the very end, he wondered if it is a reasonable approach to unilaterally and unlawfully conduct hydrocarbon exploration drillings in another country’s Exclusive Economic Zone, through the threat of use of force, and whose interests is Turkey protecting when its claims limit for its own benefit the Exclusive Economic Zone of Cyprus by 44%, at the expense of the rights and interests of both Greek and Turkish Cypriots.

Reiterating that his intention is not to embark on a confrontation, Anastasiades said that he fully ascribes to Erdogan’s emotional concluding remarks, as they encapsulate the essence of what we are trying to achieve in Cyprus: “Freedom, peace, prosperity, justice and a peaceful and safe future for all”.

“This is my vision. This is the vision of the people of Cyprus: To end the unacceptable status quo with a state which will ensure common and prosperous future for the coming generations of Greek and Turkish Cypriots. A future which will allow them to live freely together and jointly collaborate, under conditions of stability, safety and peaceful co-existence. Only then we will able to utilize the yet unfulfilled potential and capabilities of our country,” he said.

Anastasiades pledged not to deviate from pursuing this vision and called “on Your solidarity in supporting the efforts to reach a solution on the Cyprus problem”.

He stressed that despite diverging aspirations or conflicting interests, “we should rise to meet our shared responsibility and collectively strengthen our support and commitment to the UN.”

Referring to climate change, he said that “Cyprus, taking into account particularly alarming projections concerning the impact of climate change on our immediate region –  namely the Eastern Mediterranean and Middle East – has recently undertaken an initiative for coordinating regional climate change actions.”

He noted that “this initiative intends to bring together our regions’ leading scientists and policymakers, with a view to developing practical and achievable solutions that will have durable benefits for our citizens.”

Anastasiades said that Cyprus is also in the forefront of other initiatives aiming to establish conditions of peace and stability in our region, through, amongst others, establishing synergies and enhancing our relations with neighboring countries,” noting that this advanced cooperation, is based on the doctrine of multilateralism and positive agendas, without exclusions.

It constitutes a promising step towards institutionalizing partnerships in the Eastern Mediterranean, he added.

Referring to global challenges, particularly poverty, climate change and sustainable development, he said that the only solution in tackling these challenges rests to the decisiveness of the UN member-states, so as to finally leave aside short-term interests and expediencies and reach a joint understanding of the need to fully adhere to the UN Charter, resolutions and decisions of our common family.