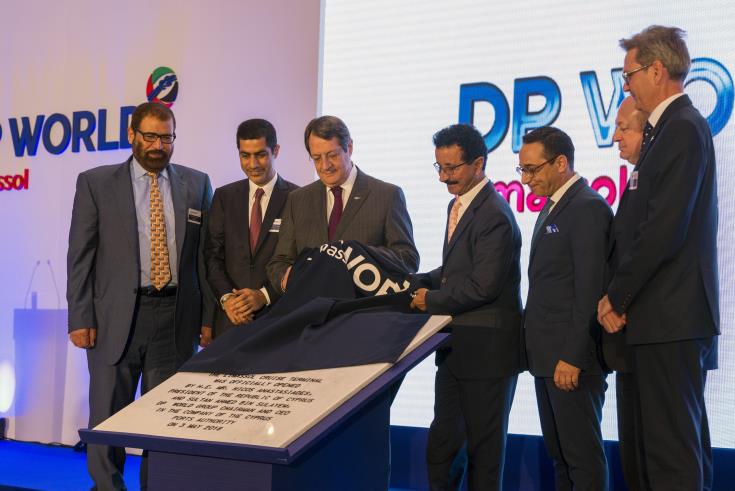 The terminal features seven pods with a total floor area of 8,205 m2. Its east berth has a length of 480m and depth of 11 m and is able to handle the largest cruise vessels in the world, DP World Limassol says.

The oil and gas logistics zone is 10,000 m2 with a 430m berth. Current occupation is at 30% and it has been used to support recent ENI offshore drilling campaign, while Exxon Mobile has also nominated it as its planned drilling logistics base.

Addressing the opening of the terminal Cyprus President Nicos Anastasiades spoke of a new page in the history of the Cypriot economy since the commercialisation of the port in April 2016.

Apart from been a significant source of revenue for the country, he noted, the agreements which were signed constitute the pinnacle of an important project for our country’s growth prospects, through the upgrade of Cyprus’ role in South Eastern Mediterranean, its promotion as an important regional hub for tourism, shipping and trade in the Eastern Mediterranean and in general.”

This project, which is one of the biggest in Cyprus, President Anastasiades said, constitutes an example for the Republic of Cyprus’ continued efforts to become a modern centre for investments, trade and services.

He also pointed out that the terminal “will offer a stable, effective and modern environment for cruises, trade and other port related work”.
On his part Sultan Ahmed Bin Sulayem, DP World Group Chairman and CEO said addressing the event that “today is a celebration of the teamwork and collaboration in creating a new front door for tourists coming to Cyprus.”

“Our aim is to be the port of Choice in the Eastern Mediterranean and we want to create infrastructure that enables sustainable growth of the local economy and for Cyprus,” he noted.

By In Cyprus
Previous articleNestoros: Difficulties in excavating possible mass grave in Ashia
Next articleOnline real estate auctions in the works