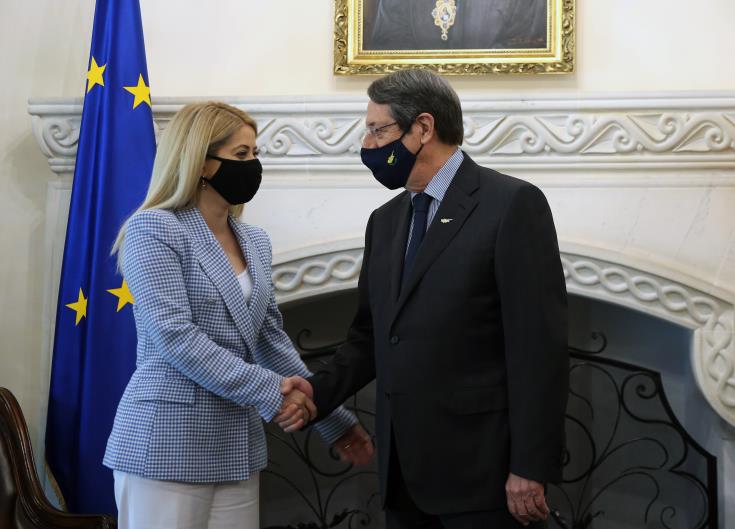 Cyprus President Nicos Anastasiades received on Friday newly elected House of Representatives President Annita Demetriou, praising her for her strong personality and hard work to which he attributed her success and promising close cooperation.

The President congratulated Demetriou, saying that her success was, mainly, due to her strong personality and her hard work.

“All your actions are proof that skills are not men`s prerogative,” he noted, adding that rather they are capabilities “all citizens have, regardless of gender or diversity,” said President Anastasiades addressing Demetriou.

Furthermore the President said that he was happy for the election of Demetriou to the highest office of the legislative power, and the second highest position of the Republic of Cyprus based on the Constitution.

“I wish every success in the work you undertake and I was happy for your remarks yesterday, that a climate of consensus must prevail, a climate of conciliation, always for the national good,” he added.

For her part, Demetriou said that the honour is great and the responsibility is greater. “The message of the Parliament is clear that there should be cooperation and unity of the legislative and the executive power. It is what the citizens expect from us, to restore the relations of trust, to invest in the Cyprus of tomorrow,” she added.

In statements after the meeting, Demetriou said that the common goal is for the legislative and the executive power to work together in order to accomplish everything that the citizens expect and “so that we can regain our credibility and strengthen our relationship of trust with the people.”

She expressed the certainty that the House of Representatives as a whole will respond to this call and will be able to really have the necessary outcomes as soon as possible, with transparency, efficiency and determination.

Asked if she would make an effort to reach an agreement between the parties on the issue of approving the bills related to the Recovery and Resilience Plan, Demetriou replied “certainly; we all agree that these reforms are necessary for the Recovery Plan but also for us to be able to have the necessary results.”

She added that she will personally take an initiative in this direction, in order to shape a result for the much-needed reforms that could be voted by the Parliament.