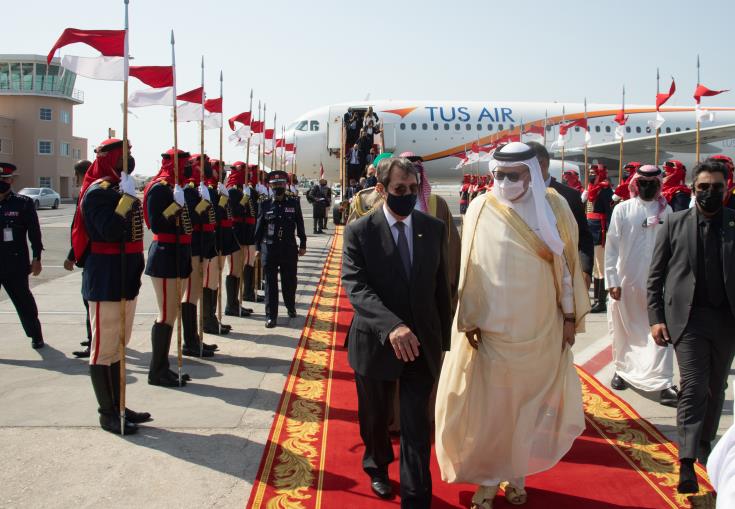 Cyprus President Nicos Anastasiades on Monday morning kicked off an official visit to Bahrain after he was received by King Hamad bin Isa Khalifa at the Gudhaibiya Palace.

The two heads of state then proceeded with chairing expanded talks between delegations of the two countries.

“The visit takes place in the framework of a government decision to develop bilateral relations with Arab Gulf countries,” an official announcement said.

“A Memorandum of Understanding on Financial and Technical Cooperation and a Visa Waiver Agreement for diplomatic, special and official passports will be also signed,” it added.

The government considers the further development of relations with Bahrain as particularly important since it enhances the multilateral approach of its foreign policy, it also said.

The President will also discuss Bahrain`s support of our country in the Islamic Cooperation Organisation, as well as of his Climate Change Initiative, it added

He is accompanied by Minister of Foreign Affairs Nikos Christodoulides and Minister of Energy, Commerce and Industry Natasa Pilides.

As well as Minister of Agriculture, Rural Development and Environment Costas Kadis,  Deputy Minister of Tourism Savvas Perdios and other officials.