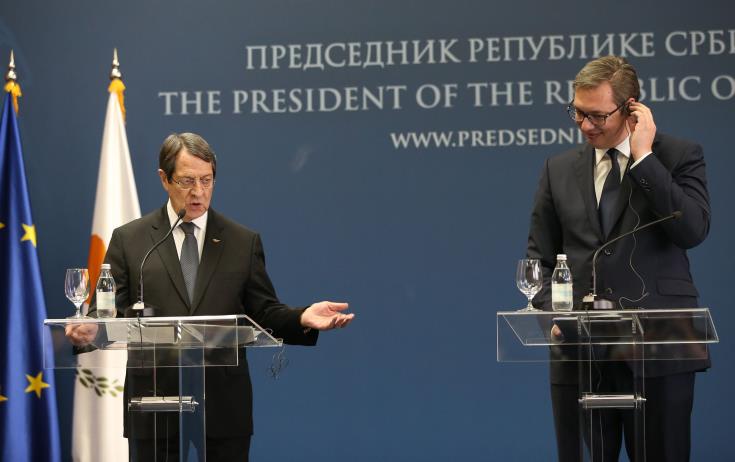 The intention expressed by the UN Secretary-General Antonio Guterres to send a special envoy to Cyprus for contacts with all parties involved is an opportunity to clarify the intentions of both sides and to achieve positive results, allowing for the immediate resumption of Cyprus talks, said the President of Cyprus Nikos Anastasiades.

The President of Serbia Aleksandar Vučić wished from his part to find a peaceful solution to the Cyprus problem and underlined the principled stance of Belgrade on this matter.

President Anastasiades is paying an official two-day visit to the Serbian capital and met today with his counterpart, discussing the Cyprus problem, bilateral relations and Serbia’s European prospects.

In statements to the press, President Anastasiades thanked his counterpart for his country’s support to the sovereignty, independence, territorial integrity and unity of the Republic of Cyprus. According to an announcement by the Presidency of the Republic, he also informed Vučić over Turkey’s recent provocations in the exclusive economic zone of Cyprus and the latest developments over efforts to reach a Cyprus settlement. President Anastasiades also expressed Nicosia’s readiness to continue with negotiations from the point they were left off at the Swiss resort of Crans-Montana, last summer.

The President of Cyprus further reiterated the determination of the Greek Cypriot to continue the dialogue, under the aegis of the UN Secretary-General. He said, moreover that the goal is to reach a solution that will create a “truly independent, sovereign state, without any guarantees or intervention rights and with the withdrawal of all occupation troops” in order to become “a normal state” in line with the Secretary-General’s statement.

He also underlined the need to refrain from actions that don’t facilitate the two communities of Cyprus from reaching a settlement and put obstacles, while increasing mistrust among them.

The President of Cyprus also thanked his counterpart for the contribution of Serbia’s contingent in the UN peacekeeping operation in Cyprus (UNFICYP).

Referring to Belgrade’s EU prospects, President Anastasiades said that Serbia should consider Cyprus as a reliable partner within the EU and underlined that the future of Serbia ought to be in Europe.

He reiterated moreover that the Republic of Cyprus does not recognize the unilaterally declared independence of Kosovo and expressed Nicosia’s support to respecting the sovereignty and territorial integrity of the Republic of Serbia.

President Anastasiades also announced that Cyprus will host the 2nd Cyprus-Serbia Intergovernmental Conference before the end of the year and will organize a business forum, aiming at enhancing cooperation in the fields of economy, commerce, tourism and other areas.

Speaking through an interpreter, Vučić said Serbia appreciates the support of the Republic of Cyprus over issues that concern Belgrade, adding that both the Cypriot people and President Anastasiades have confirmed this on several occasions.

He added that during his talks with the President of Cyprus, they discussed about various problems the two countries are facing and noted the support of President Anastasiades towards Serbia’s EU prospects.

With regard to bilateral relations, Vučić expressed his country’s wish to further enhance ties with Cyprus in all areas.

He also thanked Nicosia for its stance over Kosovo, noting that Cyprus is among EU member states that respect international law and Serbia’s sovereignty and territorial integrity.

Earlier, the President of Cyprus was decorated by his Serbian counterpart with the Highest Decoration of the Republic of Serbia, while Vučić was decorated by Anastasiades with the Grand Collar of the Order of Makarios III.

After his meeting with Vučić, President Anastasiades attended a working lunch with the Prime Minister of Serbia Ana Brnabić, and informed her on the latest developments of the Cyprus problem, while also discussing EU-Serbia and bilateral relations. Foreign Minister Nikos Christodoulides and Government Spokesman Prodromos Prodromou also attended.

The President also met earlier on Thursday with the President of the National Assembly of Serbia Maja Gojković.