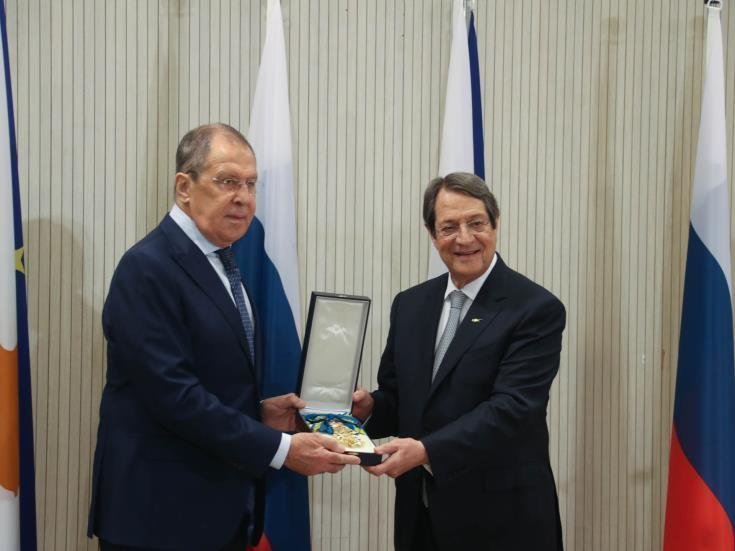 Cyprus’ President Nikos Anastasiades decorated on Tuesday Russia’s Foreign Affairs Minister Sergey Lavrov with the Grand Cross of the Order of Makarios III, for his contribution in the continuous development of the historical ties between the two countries.

The Russian Foreign Minister, who is in Cyprus on an official visit on the occasion of the 60th anniversary since the establishment of diplomatic relations between the two countries, was received in the morning by President Anastasiades, with whom he held a tête-à-tête meeting.

An honorary distinction, he added, “which is the due expression of appreciation of the State and the Cypriot people for the long-standing support of the Russian Federation and yourself to the Republic of Cyprus”.

Relations “which were forged through common cultural, spiritual and religious values and the sincere friendship developed by our peoples, laying a solid foundation for the development of mutually beneficial cooperation”, Anastasiades added.

The President recalled that the Union of Soviet Socialist Republics was one of the first countries to recognise the newly formed Cypriot state and the governments of the Russian Federation have always defended at crucial times the sovereignty of the Republic of Cyprus on the basis of international law.

He referred to Russia’s long-lasting positions of principle and the support that Moscow continues to provide to Cyprus’ efforts to reach a just solution to the Cyprus problem based on the relevant UN Security Council resolutions and the principles and values of the UN Charter.

Concluding, the President expressed his gratitude to the Russian Foreign Minister, on behalf of the Government and the people of Cyprus “for the productive and creative cooperation between the Republic of Cyprus and the Russian Federation”, and conveyed his greetings and wishes “for continued prosperity and progress to the friendly people of Russia and my friend President Putin”.

On his part, Lavrov thanked the President for the highest order of merit saying that he sees it as a symbol of recognition of the role of Russian diplomacy in promoting the full range of Russian-Cypriot relations.

Speaking through an interpreter, the Russian Minister assured the Cypriot President that all agreements that exist between the Presidents of the two countries will be implemented and that the Russian Ministry of Foreign Affairs will give its full support towards that end.