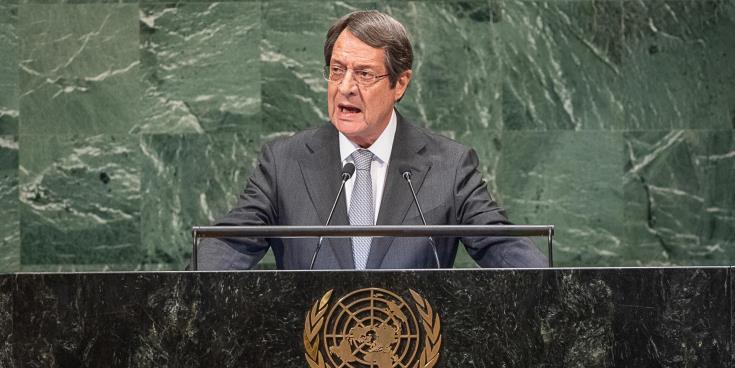 Cyprus President Nicos Anastasiades has told the United Nations that adherence to the founding principles of the organisation’s Charter which are based on rules rather than power is a must.

In a  pre-recorded speech late on Monday at the high-level meeting to commemorate the UN’s 75th anniversary, the President also said this is the only way to achieve genuine accountability and eliminate double standards.

“On its 75th anniversary, the United Nations continues to be indispensable, remaining the cornerstone of international cooperation for collective security, the peaceful settlement of disputes and the protection of universal human rights,” Anastasiades said.

“The raison d’être of the United Nations is as pertinent as ever: Saving humanity from the scourge of war, but this can only be materialized if we uphold both the prohibition of the threat or use of force and the system of collective security created to suppress acts of aggression, in full respect to the principle of sovereign equality of all states,” he added.

At the same time, he pointed out, the UN is inextricably linked to the plight and aspiration of all our citizens for a better and just World adding that this is also the spirit of the ambitious Political Declaration we adopted today.

“But words matter only to the extent that they are matched by action. We would have expected by now to have a more equal and more humane world, without armed conflicts, violation of the sovereignty and the exercise of sovereign rights of nations, forced migration, inequality, destruction of cultural heritage or proliferation of weapons of mass destruction,” he added.