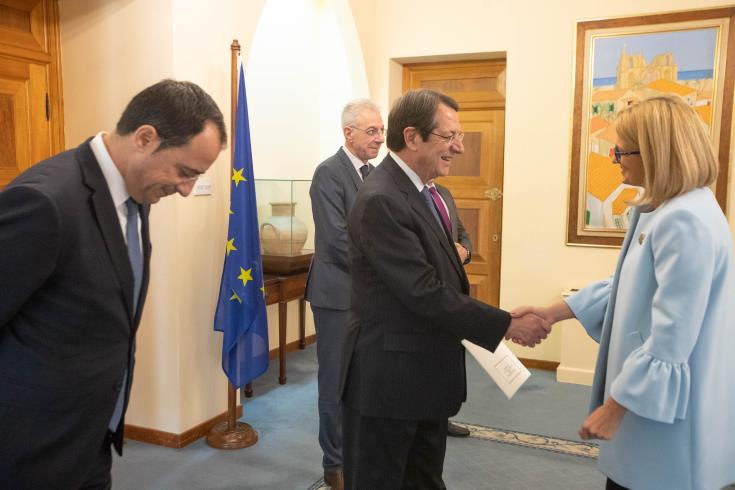 Poland’s new Ambassador to the Republic of Cyprus, Irena Lichnerowicz-Augustyn,  said her country supports any lasting and functional solution that that is a result of negotiations and will be accepted by all Cypriots in referendum and that will make the two communities feel safe in their new state.

Lichnerowicz-Augustyn presented her credentials on Wednesday to President of the Republic Nicos Anastasiades, during a formal ceremony at the Presidential Palace.

Ambassador Lichnerowicz-Augustyn said Poland has always presented a principled stance when it comes to the Cypriot issue, noting “we appreciate efforts of all parties engaged in this process”. She said her country will “support any just, lasting and functional solution” that is a result of negotiations and will be accepted by all Cypriots in referendum.What is fundamental, she said, is that the two communities feel safe in their new state.

She also said bilateral relations are very good, however there are still some areas where cooperation could be enhanced or accelerated.

Receiving the credentials, President Anastasiades said Cyprus and Poland share a long history, dating back to the Middle Ages, adding “bilateral cooperation is dynamic” and coordination on several fronts is constantly growing.

He assured the new ambassador of Cyprus’ willingness to keep up this momentum of cooperation and expand it even further in various areas of mutual interest, such as bilateral trade, tourism, education, health, research and development. We stand ready, he said, to explore opportunities for private business cooperation between the Cypriot and Polish entrepreneurs.

President Anastasiades said the Cyprus Economy is on a stable growth path to recovery. In fact, 2018 is the 4th consecutive year of positive real GDP growth, higher than the Euro area average, estimated at 3.8% for the whole year. The inflation rate is estimated at 0.5% for 2018 and the unemployment rate dropped at 8.4% in May 2018, recording the biggest annual unemployment decrease in the EU. The main policy objective of the Government is the full recovery of the economy and the creation of the necessary conditions for sustainable growth.

Turning to the Cyprus problem, he said his top priority remains none other than addressing the unacceptable current state of affairs with the continuing Turkish occupation of 37% of the territory of the Republic of Cyprus, since there is no doubt that lasting peace and stability can only be achieved through the comprehensive settlement of the Cyprus Problem.

The President expressed hope that the meetings of the Special Envoy of the United Nations which will soon take place with all other interested parties and stakeholders involved will allow the UN Secretary-General to be in a position to resume the process.

President Anastasiades wished that both Turkish Cypriots and Turkey will respond positively to the new prospect that is unfolding again, “taking into account, in a comprehensive manner and without being selective, the provisions set by the Secretary-General at the Conference in Crans Montana”. 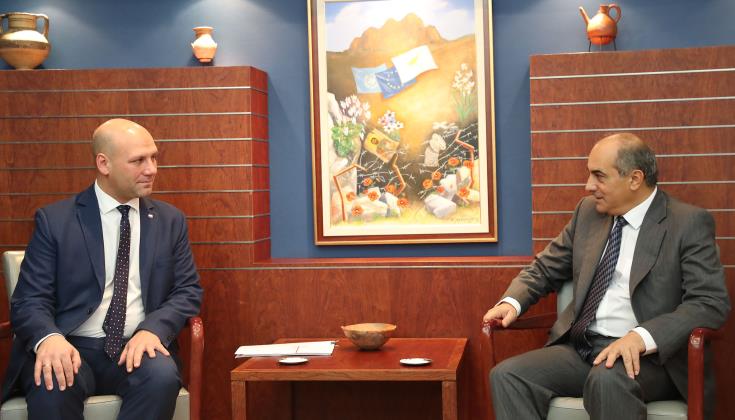 President of the House of Representatives Demetris Syllouris and Secretary of State for Polish Community Abroad, European Policy and Public Diplomacy – Szymon Szynkowski vel Sęk, reconfirmed the very good relations and cooperation between Poland and Cyprus at parliamentary, economic, EU and cultural levels.

A House press release said Syllouris received vel Sek, who is currently visiting the island, accompanied by officials from his ministry.

Referring to the Cyprus problem, Syllouris said it is an issue of illegal invasion by Turkey and occupation of more than one third of the Republic of Cyprus’ territory and this is how the international community should look at the Cyprus problem.

Szynkowski vel Sęk underlined that Poland supports efforts to solve the Cyprus problem and reunite the country based on international law and UN decisions.

He also said that Poland favours a peace force in Cyprus for as long as necessary and until a solution is achieved.

The two men discussed the reforms currently underway in Poland. They also exchanged views on further promoting the economic and commercial relations between the two, with special emphasis on new technologies and start ups.

By In Cyprus
Previous articleFederal Member of the Australian Parliament in Cyprus for meetings
Next articleNo-deal Brexit would cost Britain 6 pct of GDP, IMF warns