Cyprus’ oil and gas resources should be equitably shared between both communities on the island, says Cohen 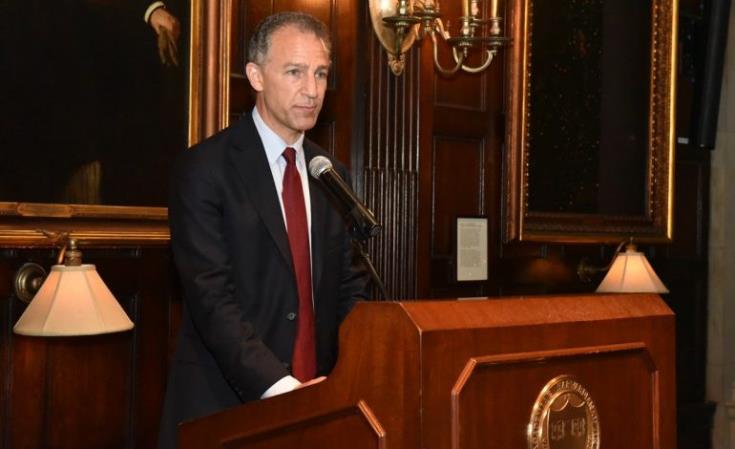 Cyprus’ oil and gas resources should be equitably shared between both communities on the island, in the context of an overall settlement said Jonathan Cohen, Deputy Assistant Secretary for European and Eurasian Affairs. Cohen replied in writing to questions concerning Cyprus, submitted by Bob Menendez, the Ranking Member of the Senate Foreign Relations Committee.

The Senate Foreign Relations Committee moved without a vote the confirmation of the Ambassadorial Nominee, Jonathan Cohen, to the full Senate, where he is expected to receive an easy approval. Cohen was nominated by President Trump to be the Deputy Permanent Representative of the United States to the United Nations.

Asked on the role the Security Council should play in addressing Turkey’s belligerent actions in the Eastern Mediterranean and the Aegean Sea, including Turkish naval efforts to obstruct hydrocarbons exploration in Cyprus’ Exclusive Economic Zone, Cohen said:
“If confirmed, I will continue to support longstanding U.S. policy recognizing the Republic of Cyprus’s right to develop its resources in its EEZ. The island’s oil and gas resources, like all of its resources, should be equitably shared between both communities on the island in the context of an overall settlement”.

Cohen said he will “discourage any actions or rhetoric that increases tensions”, adding it is “important that the countries in the region continue to create the conditions that will facilitate peaceful economic development and enable companies to operate in a stable and predictable environment. If confirmed, I will urge the Security Council to send the same message.”

On UNFICYP, Jonathan Cohen said that he will urge the Security Council to continue to review all peacekeeping missions through the prism of the U.S. peacekeeping principles.

Asked about the Administration’s priorities with respect to the Eastern Mediterranean and its bilateral relationship with Cyprus, he said: “Stability in the Eastern Mediterranean is a top priority for the Administration. If confirmed, I would be willing to take steps to enhance the relationship between the United States and the Republic of Cyprus. I will continue to support the high-level U.S. engagement with the Republic of Cyprus on the settlement process and on the wide range of other issues of common concern to both countries.”

Earlier this year, SAIPEM 12000 drillship, commissioned by Italian energy company ENI, to start drilling operations in block 3 of Cyprus’ Exclusive Economic Zone (EEZ) was halted by five Turkish warships, while making a new effort to reach Soupia target, which it was unable to fulfil due to Turkish threats.

Cyprus has been divided since 1974 when Turkey invaded and occupied its northern third. A Conference on Cyprus, in the context of UN led talks for the reunification of Cyprus under a federal roof, which took place in the Swiss resort of Crans-Montana last summer, ended without an agreement.

By In Cyprus
Previous articleReal Madrid crowned Euroleague champions after defeating Fenerbahce (85-80) in final!
Next articleCouncil of Ministers to discuss the Strategic Framework for Fiscal Policy