Cyprus not prejudiced regarding cooperation with neighbouring countries, President says 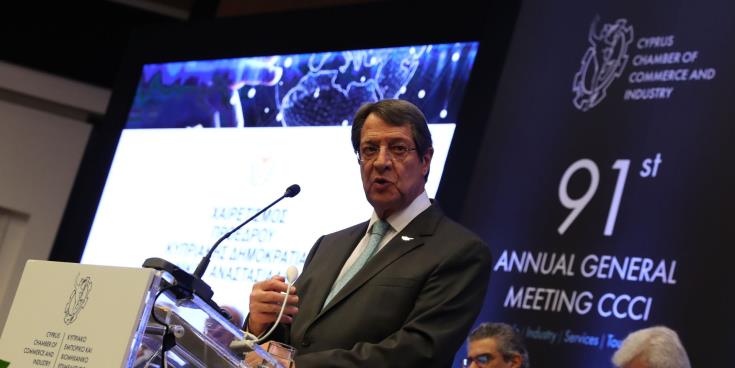 President Nicos Anastasiades has sent the message toTurkish Cypriots that no one is trying to appropriate the natural wealth belonging to all legitimate citizens of the Republic of Cyprus and that he was not prejudiced regarding cooperation with neighbouring countries, including Turkey.

Addressing the 91st AGM of the Cyprus Chamber of Commerce and Industry, in Nicosia, President Anastasiades said that a high priority was the implementation of the government’s energy programme with the creation of infrastructure for natural gas, the adoption of a management framework for future revenue from natural gas, and the development of an Eastern Mediterranean natural gas passage, which would connect reserves in Cyprus’ exclusive economic zone and those in the Eastern Mediterranean, with countries in the region and the EU.

He said that the government looked forward to the results of exploratory drilling by Exxon Mobil.

Addressing the representatives of the Turkish Cypriot chambers who attended the AGM President Anastasiades made clear that no one aimed at appropriating the natural wealth, which belonged to all legitimate citizens of the Republic of Cyprus.

He also said that Cyprus was not prejudices regarding cooperation with neighbouring countries, including Turkey, noting that the natural wealth need not give rise to competitiveness or crises but could instead be a positive influence.

Referring to the Cyprus problem, he reaffirmed his determination to strive for a solution that would be to the benefit of all Cypriots, adding that he expected the same positive stance from the Turkish side.