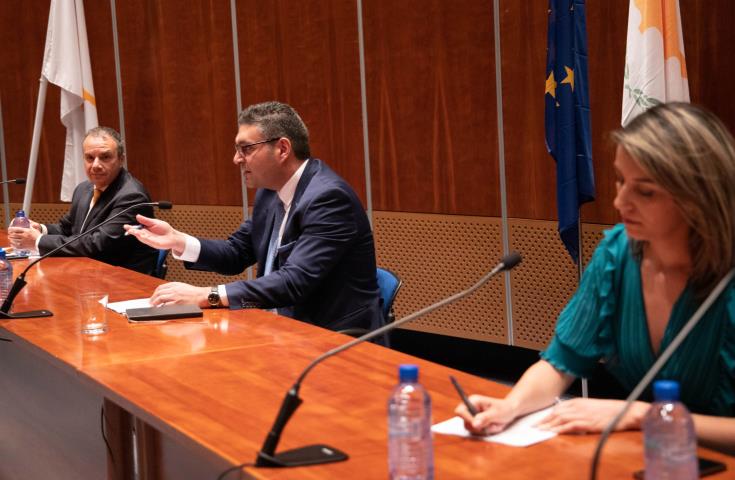 Cyprus Minister of Finance Constantinos Petrides presented on Thursday the second government package aiming to boost confidence and economic activity as Cyprus emerges from a two month lockdown to curb the spread of the coronavirus outbreak.

The new package follows the first fiscal support measures amounting to €1.2 billion. The new package features direct grants to very small business and self employed persons with €100 million and interest subsidies for new loans for new loans for very small, small and medium and large corporations with liquidity shortage, with an estimated fiscal package of €200 million in four years, as well loans from the European Investment Bank (EIB) granted with state guarantees with a total value of €1.7 billion.

“We need to focus on boosting confidence in the market. After the lifting of restrictions, the market should recommence operation and the engines of the economy must restart,” Petrides said, pointing out that so far Cyprus has not seen massive layoffs or bankruptcies.

“A small country like Cyprus, which did well in tackling the health crisis, will manage to exit the economic crisis stronger despite recession, he added.

The government decided to participate in the EIB’s recently approved Pan-European Guarantee Fund by granting state guarantees amounting to €32 million which will generate new lending between €300 and €400 million to Cypriot SMEs and mid-caps that employ up to 3,000 persons.

The fund will provide loan agreements to banks with guarantee up to 80%.

Furthermore, the government decided to increase by €500 million state guarantees provided to the EIB which provide cheap loans to Cypriot SMEs and mid-caps through Cypriot banks. The scheme launched in 2014 has led to new loans amounting to €930 million so far.

The scheme provides for new loans with a maturity of up to 12 years and interest rates lower by 50 basis points than the banks would normally charge banks without EIB funding. Furthermore borrowers will benefit by an additional 50 basis points interest reduction if the comply with the Jobs for Youth criteria.

Moreover, participating businesses could also benefit from interest rate subsidy scheme under the condition they do not proceed with layoffs over 2% of their employees since the launch of the scheme.

Petrides also said that the government approved an interest rate subsidy scheme for new business loans to enterprises, including the self-employed, which face liquidity shortages due to the pandemic.

The scheme concerns loans that were granted or will be granted from March 1st 2020 until December 31st 2020.
Beneficiaries will be all the enterprises and self-employed, under the condition that they are not considered problematic as provided by the definition of the European Commission.

Additionally the government decided to subsidize the interest rate for new mortgages that were granted or will be granted from March 1 2020 until December 31 2020. The scheme cover loans with a value of up to €300,000 with maximum interest rate of 2.30% and will cover 1.5% of the rate for a period of four years.

In a bid to boost recovery, the government decided to give instructions to all the competent authorities with a view to immediately call for tenders for all development projects based on the President’s announcements or other projects which are mature, irrelevant from the planned period for the tenders according to that state budget.

Moreover, the government approved a new a scheme of incentives up to €6.3 euros with a view to boost the tourist sector and Cyprus’ connectivity. The scheme which complements the current plan amounting to €9.37 million provides for subsidies for flights to Cyprus with a passenger capacity between 40% and 70% for a period of seven months.

With a view to reinforce the tourist accommodations and restaurants the government decided to reduce VAT from 9% to 5% for the period from July 1st 2020 until January 10th 2021.

The government will also pay tourist agents €10 million to co-finance advertising campaign to promote Cyprus as a safe desination.

At this second phase, as the economy restarts, the government with yesterday’s Cabinet decisions adopts a new more targeted package, a socially fair and financially effective package,” Petrides concluded.