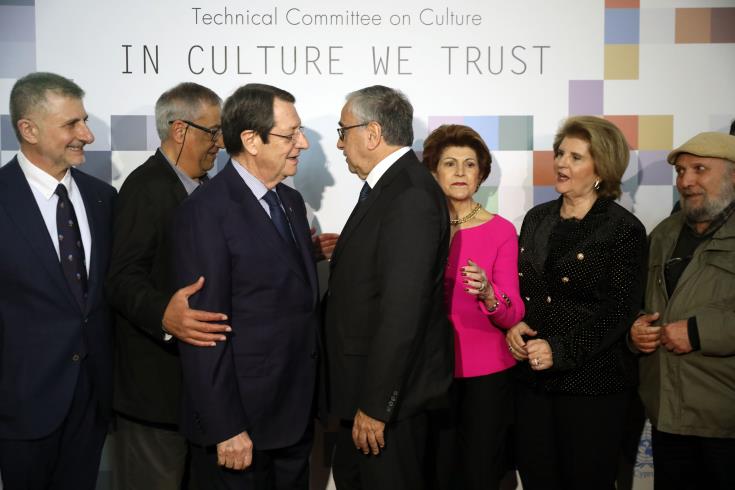 The exchange was made possible through the work and cooperation of the Bicommunal Technical Committee on Culture, members of which also curated the exhibition. The work was funded and facilitated by the European Commission, the UNDP and the UN’s Good Offices Mission in Cyprus.

“It is worth noting that these art works were found in various houses and public spaces in Famagusta after 1974, including the Municipal Gallery and the port of Famagusta,” he added.

As regards the archives of the Cyprus Broadcasting Corporation, he continued, they relate to audio-visual material which has been digitalized and covers the period from 1955 to 1963. It includes social, cultural and sporting events of the Turkish Cypriot community, including references to Turkish Cypriot artists and journalists who at that time either worked at the CyBC or took part in its programmes.

President Anastasiades congratulated the supporters and organisers of the exhibition, “which reminds us of not only the historic, social, cultural and artistic heritage of our two communities, but also the recent past when Greek Cypriots and Turkish Cypriots used to collaborate and cooperate with creativity and imagination, without ideological barriers and any ethnic or social exclusions.”

“These memories of the peaceful past should guide our actions as to what we envision to be our common future,” he noted.

He reiterated what he had conveyed to Mustafa Akinci during the “Imagine” Conference on December 16, 2019 that “there is no other choice or alternative but to bring peace to our homeland”.

According to President Anastasiades “the way to realise this is through addressing the legitimate sensitivities and concerns of each community and by building on mutual respect in merging what we consider to be the joint interests of Cypriots, and only Cypriots.”

“Only then we can achieve lasting peace that will establish a viable and functional Federal State, securing our joint future in a united Cyprus, member of the EU, free from dependencies by any third country and in full respect of the democratic principles, the human rights and fundamental freedoms of its legal citizens”, he said.

On his part Akinci said during his address that he sees this exhibition “as a manifestation of the Turkish Cypriots and Greek Cypriots’ respect for each other’s artistic and cultural values and find it promising as regards the future.”

“The protection and preservation of the pre-1974 paintings of Greek Cypriot artists enabled us to return them in due course, hence making this exhibition possible,” he noted.

Similarly, Akinci added, the fact that the radio-TV recordings of Turkish Cypriots belonging to the pre-1963 period are preserved and handed over to our community by the Cyprus Broadcasting Corporation is welcomed as a gesture of good will and respect.

“Our past could have been different but we cannot change the past,” Akinci said.

However, he pointed out, “we can take responsibility for a peaceful future and demonstrate the necessary will in this regard.”

“Respecting and protecting each other’s values, cultural symbols and works of art is one of our primary responsibilities for a peaceful future,” he concluded.

Addressing the event, UN SG’s Special Representative in Cyprus and head of UNFICYP Elizabeth Spehar said that the exhibition “is a unique opportunity to rediscover these Cypriot cultural gems and to cherish them together as one island.”

Most importantly, she added, “it speaks powerfully to the immeasurable value of a culture of peace.”

She also expressed the UN’s readiness “to continue to support the sides in implementing worthy, joint initiatives that can promote further dialogue, contact and cooperation between the two communities, thereby building the necessary foundation to achieve and sustain a comprehensive settlement.”

Addressing the event, Greek Cypriot co-chair of the Technical Committee on Culture Androulla Vassiliou said that through the Committee’s activities “we have become witnesses of the fact that culture indeed unites people and this has become more evident with this exchange, the exhibition of which you are witnessing together.”

She expressed the hope “that similar confidence building measures in the field of culture will continue,” adding that while they are necessary to prepare the ground for a solution and the post-solution era “our wish and our primary objective should remain the solution of the Cyprus problem on the basis of a bizonal, bicommunal federation and the reunification of our country for the benefit of all our citizens.”

It is only then that we can all work together, by putting in action all our energy and by using the best brains among all our people to make Cyprus a thriving country, participating constructively in the work and the objectives of our wider family, the EU, she said. Becoming, she added, “the beacon of stability and peace in the volatile region in which we live.” She expressed the readiness and determination of all members of the bicommunal committees “to help in this difficult but necessary endeavour.”

In his address, Turkish Cypriot co-chair Kani Kanol spoke of the conflict in the island noting that “it almost seems that there isn’t a single family who was not affected by the wars over the years, who did not suffer loss and pain, as indeed my family has.”

My preference, he said, “would have been that at least my children would have inherited a sustainable, peaceful, prosperous and multi-cultural country by now,” adding that “alas, we have not yet succeeded in achieving this.”

“We have not learned to listen and understand each other, show love and respect and empathize. On the contrary, we did the opposite and sowed fear and hatred, demonizing the other,” he continued.

As a result, he said, “we seem to be condemned to continue living in this divided land in a state of ceasefire that offers no bright future for our youth.”

“This event is a reminder to us that with bold leadership and hard work, we can achieve great results through co-operation and collaboration across the divide that bring the sides closer,” he stressed.

In a media event, which took place earlier on, Sergiy Illarionov Head of office / coordinator of the office of UN SG’s Special Advisor on Cyprus, Head of the European Commission’s Representation in Cyprus Ierotheos Papadopoulos, Tiziana Zennaro, UNDP Senior Programme Manager, Vassiliou and Kanol as well as the two curators of the exhibition Yiannis Toumazis and Ruzen Atacan spoke of the history, the effort and the hard work and collaboration invested in the project until its fruition, as well as the emotions it evoked and its significance to building a culture of peace on the island.