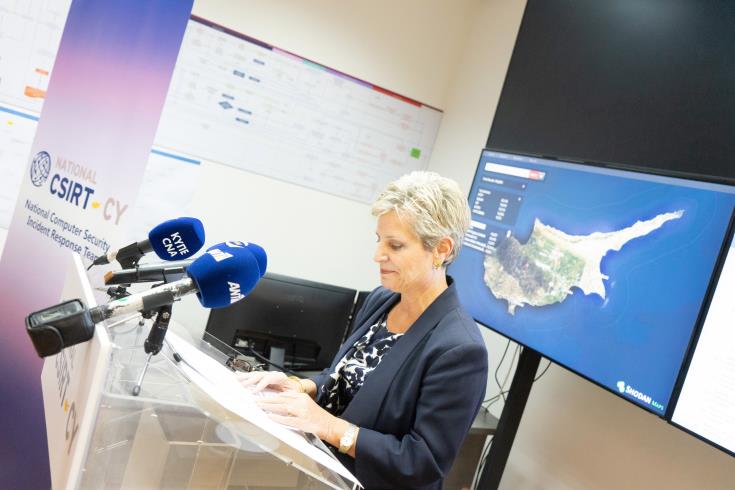 Cyprus on Monday launched its National “Computer Security Incident Response Team” or CSIRT, tasked to manage cyber-attacks against critical information infrastructure and networks in the public or private sector.

Vassiliki Anastasiadou, the Minsiter of Transport, Communications and Works addressed the opening event, in Nicosia, noting that CSIRT aims to spearhead efforts to effectively tackle cyber-attacks.

Speaking duirng the event, the Minister said that important steps have been taken since 2013 to improve cyber security in Cyprus. The economy, trade, and the society in general depend more and more on digital infrastructure and the internet, Anastasiadou added.

CSIRT, with its high-level expertise and infrastructure spearheads efforts to effectively tackle cyber-attacks in the Republic of Cyprus and minimize their impact on critical information infrastructure, she said.

Sanou said from his part that CSIRT will enhance Cyprus’ cyber-security and will contribute to the efficient handling of cyber-incidents at a national, regional and global level.

“I am confident that the CSIRT-Cyprus will become rapidly a regional reference for cybersecurity” he added.

He said moreover that the Centre will certainly strengthen the position of Cyprus in the international efforts to build a secured cyberspace.

Sanou expressed his content that Cyprus is hosting the 2018 Regional Cyberdrill for Europe in November.

The team “could be characterised as the cornerstone of cybersecurity for the Republic of Cyprus,” said Michaelides, while taking the floor.

He added that Cyprus needs to provide a secure and safe environment for the companies that are active in the country, as well as for its citizens. Therefore, efforts to further upgrade CSIRT will continue, he said.

He noted that staff will double next year, from 12 to 24 people, to offer services around the clock.

By In Cyprus
Previous articleHarley-Davidson to move some production out of US to avoid EU tariffs
Next articleCybarco’s beachfront homes at Akamas Bay Villas: Launch of sales and construction of second phase