Cyprus, Israel and Greece in pledge to boost defence cooperation 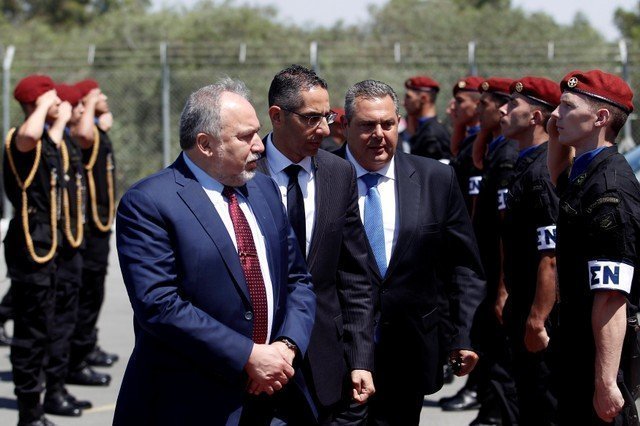 The defence ministers of Cyprus, Israel and Greece on Friday highlighted importance of cooperation to tackle challenges in the volatile region.

After a trilateral conference held in Larnaca, Cypriot Minister Savvas Angelides and his Israeli and Greek counterparts Avigdor Lieberman and Panos Kammenos said they also seek to expand cooperation on cyber-security, joint military drills and search and rescue operations in the eastern Mediterranean.

They also attended a conference of defence companies from the three countries and highlighted the opportunities for strengthening cooperation in this sector.

Addressing the conference Angelides said all three countries were cooperating in an attempt to build close ties and establish bridges for development and progress.

“This collaboration enhances our individual and collective ability to counter effectively various risks, and ultimately it will establish a peaceful political environment,” he said.

He added that the cooperation in the defence industry would eventually yield multiple positive fallout for the three countries.

As he said, the launch of cooperative defence projects would signify the mutual understanding and assessment of existing and future risks, leading to possible acquisition of common defence systems and strengthening the capability of joint actions against threats and challenges. He added that it would also have positive and profound impact on both the economy and society at large.

“The close cooperation in the specific sector will create new synergies and opportunities to the benefit of the economy as a whole, but also to diverse layers of society such as businessmen, entrepreneurs, researchers and workers,” he pointed out.

Defence Minister of Israel Avigdor Lieberman expressed his satisfaction for the presence in the conference of many companies from Israel, pointing out that this fact reflected the high level of political cooperation between the three states.

He also said that what was achieved in the previous 9-10 years between the three countries ‘’was unbelievable’’ and that the cooperation was in the interest of all three states.

Lieberman referred to the cooperation in some vital issues, such as confronting terrorism, trafficking, smuggling of weapons and drugs, pointing out that every month and every day the dialogue between the countries was deepening especially on military level.

“Today is a new stage. Cooperation in industrial level between our military industries is really a very important step for cooperation and for security of all our three states”, he added.

In his speech Defence Minister of Greece Panos Kammenos referred to the cooperation between the three countries in the field of firefighting and used as an example yesterday’s fire in a forest area near Pyrgos Tyllirias in Cyprus. As he said, Israel offered three firefighting aircraft in ten minutes to help Cyprus and Greece was ready to send two firefighting airplanes from Thessaloniki, something, as he said that sent a very strong message.

He also referred to the importance of the preparation of a common proposal of the three countries for the protection of borders, saying that the EU was ready to finance that project which it could be extended to the north of Africa. He added that those synergies had the full political support and were very important for the companies of the three countries.

As regards to the conference, Kammenos said that it was a step towards the goals set by the trilateral cooperation for the mutual benefit of the three countries.

He also stressed that for Greece it was a very significant day, because after the decision of the Eurogroup on Thursday evening, it was the last day of the 8 year economic crisis.

“We are ready for the future and we are together”, he added.

Following the conference, the three defence Ministers met with the President of the Republic of Cyprus Nicos Anastasiades.