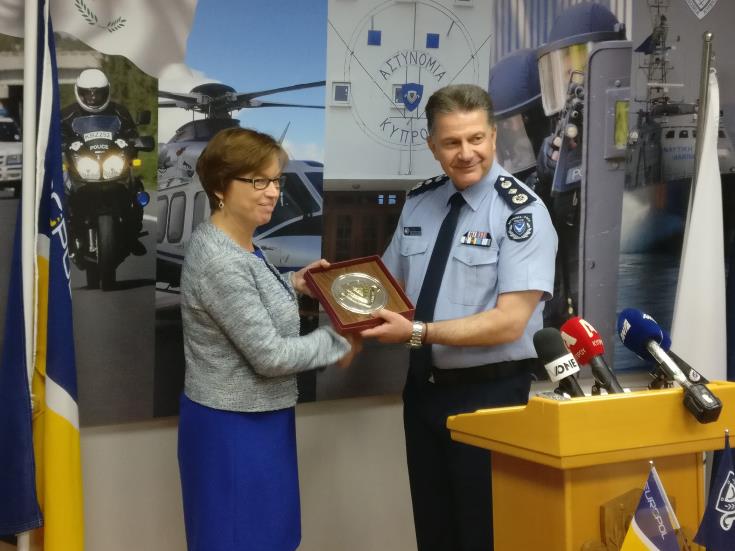 Cyprus is a very reliable partner of Europol, the Director of Europol Catherine De Bolle has stressed, pointing out that on cybercrime Cyprus is one of the most important countries in Europol.

Speaking after her meeting here today with Chief of Police Zacharias Chrysostomou, De Bolle said that Europol’s commitment is to continue to support the Cypriot authorities in their fight against organised crime, terrorism and cybercrime. She thanked Chrysostomou for the fruitful discussion they had today.

“For us Cyprus is a very reliable partner. Cyprus experiences a lower crime rate than other European countries. We recently had some operational successes because Cyprus and Europol work on a regular basis together to fight crime,” she said.

She referred to a successful case in an operation they had recently. “It is a case of investigation by the German authorities concerning on line fraud and money laundering. Based on information coming from member states and Europol, we had operational meetings and operations in nine different countries, including Cyprus. The main perpetrator was arrested was arrested by the Cypriot authorities on the basis of a European arrest warrant,” she said.

De Bolle noted that good cooperation with Europol and information exchange is a key issue and “we are determined to do even better in the future together, especially in the fight against illegal migration and in financial crime.”

Concerning cybercrime, she said Cyprus is one of the most important countries in Europol because of the expertise invested in by the Cypriot Police.

“We will further strengthen the cooperation, we also agreed that training for police officers in Cyprus and in Europol is extremely important for the future of policing because we have to make sure that our police officers develop the right skills to tackle crime and to protect our citizens,” she concluded.

Chrysostomou said that the very good cooperation that has developed in the framework of Europol’s operation is vital because it concerns the internal security of the European Union and the protection of its citizens.

He said today they had the opportunity to focus on specific areas of cooperation for which the Cyprus Police want to have the maximum possible assistance from Europol and “we have agreed to further upgrade and deepen our cooperation at all levels”.

By In Cyprus
Previous articleTrump says did not know of 2016 Trump Tower meeting with Russians
Next article1,500 migrants have died in Mediterranean in 2018, Italy deadliest route-UN