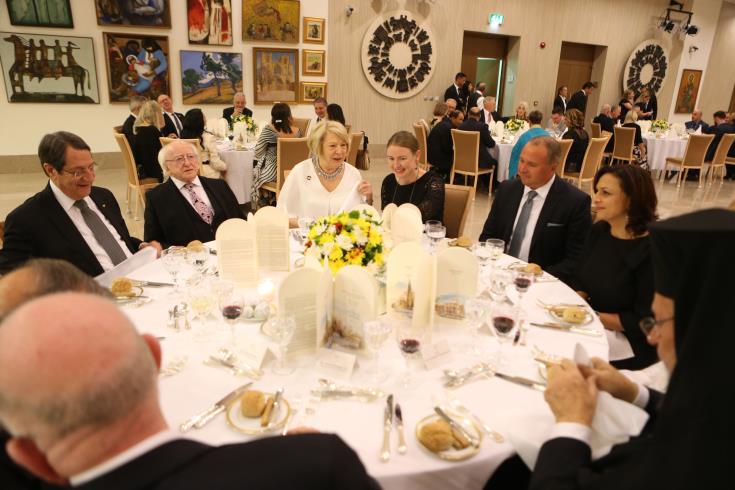 President of the Republic of Cyprus Nicos Anastasiades referred to the excellent long-standing relationship between Cyprus and Ireland based on a shared vision for peace and democracy, addressing a state banquet in honour of the President of Ireland Michael D. Higgins.

“I am extremely pleased to witness the relationship between Cyprus and Ireland growing to a solid partnership”, he said.

According to a press release by the Presidency, President Anastasiades assured his counterpart of his unwavering dedication and strong commitment to efforts aiming at the resumption of negotiations the soonest possible, with the aim of reaching a functional and viable settlement in line with International and EU Law.

“A settlement that will ensure a common and prosperous future for the coming generations of Greek and Turkish Cypriots, allowing them to live freely together, under conditions of stability, safety and peaceful co-existence, without any foreign dependencies,” he said.

He added that both nations had experienced severe financial crises, and through the resilience of their peoples, have achieved remarkable recoveries.

President Anastasiades also noted that almost a year ago, President Higgins was elected for a second term by the highest vote in any of the presidential elections in the history of Ireland.

“This is testament of the President’s immense popularity among the Irish citizens and that he continues to inspire the people of Ireland as an outstanding example of a political personality who combines common sense and rationality, with creative imagination,” he said.

On his part, the President of Ireland said that the friendship between Ireland and Cyprus was strong and historic.

“As Island nations we share much that Island life determines. We have new challenges in common for which we share a spirit of mutual support. A shared historical experience, new challenges of a global and personal kind, have benefited from the profound sense of empathy that has evolved and been created by the enduring bond between our two countries”, he said.

He also wished every success to the members of Cyprus Ireland Association in their efforts to strengthen the social and cultural connections between the two countries.

He added that Ireland and Cyprus both understand the vital relationship with the sea that Island nations share and noted that he would be visiting Larnaca to meet with those involved in the development of the new Maritime Institute. The Institute will be closely modelled on the Irish Marine

Higgins said that Cyprus was sharing with Ireland a common concern for the conservation and sustainable use of the oceans and their resources and an understanding that the world can no longer continue testing them to their limits.

He also wished that peace and reconciliation on the island of Cyprus would have a positive outcome.