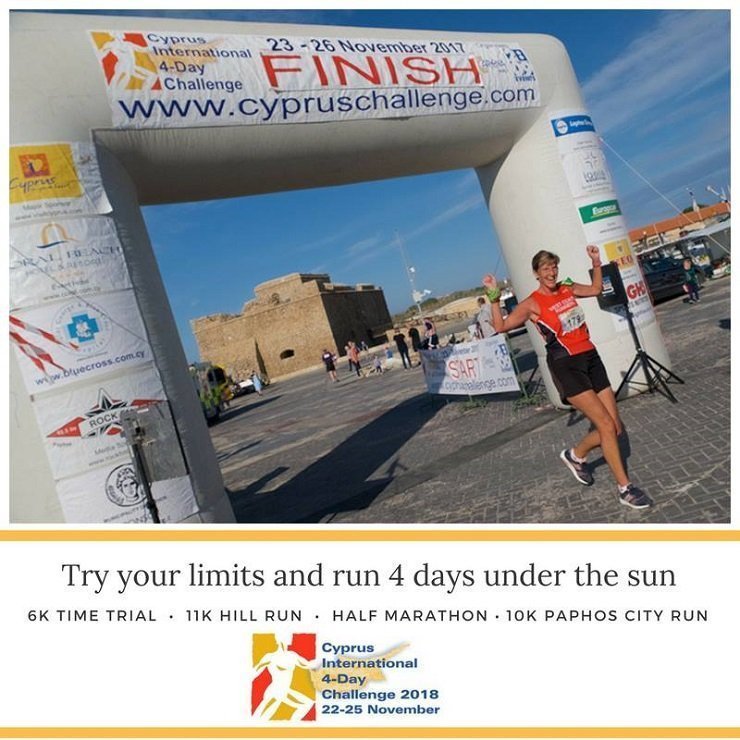 Co-organized by Arena Sports a leader in incoming sports and event organization in Cyprus and 2:09 Events – a UK event organizer and running holiday specialist (owned by Mike Gratton-an ex London Marathon winner himself- race director of the 4-day Challenge) hopes to continue offering participants an adventurous and challenging running event with its 4 different races taking place during 4 days, where the times for each race will be added together to give a winner at the end of the 4-day challenge.

The last race of the series, the 10k Paphos City Run as well as the Half Marathon can be run as a race on its own so that supporters of runners, as well as all who are interested can enjoy taking part.

The Cyprus International 4-day Challenge, is a staged running event, covering a distance slightly longer than a marathon with mountain running, trail running & cross country running. The event successfully combines a 6k time trial, a multiterrain half marathon, an 11k mountain trail run and a 10k City Run over four days. The event takes place in the area of Paphos, and for the most part of it, participants have the opportunity to compete in the AKAMAS Nature Reserve Park, in some of Cyprus most scenic routes, where every turn comes with a different stunning view, unfolding the beauty of the AKAMAS Nature Reserve Park in a panoramic sea-sky-earth motif.

Starting on 22/11 with a 6k time trial, on asphalt, runners set off in 10 second intervals and run against the clock and finishes in front of a lovely view of a ship wreck.

On the second day, 23/11 mountain running “lovers” will enjoy a trail run in a distance of 11k. The race starts just after the white river in the AKAMAS Nature Reserve and finishes by the beautiful village square / church of Pano Arodes. The hill run starts by the sea and runs immediately uphill and continues as a steady climb for 6km. The first 4km are rocky up to an old barn building where the drink station is positioned, from their the path becomes smoother. At 6km there is a fairly steep descent for 1km before climbing again, with a short steep uphill around 9km. Approching Paon Arodes it levels off and goes slightly downhill until the 500m climb up through the village to finish in the pretty church square

On the third day 24/11, competitors will be challenged through some extremely picturesque routes. The start is in the town square of Neo Chorio and continues out of the town through a narrow up hill street and out into the olive fields. The route climbs gently on a concrete road up to Smiglies picnic site where it turns into a jeep trail and climbs more steeply to drink station at 4km. From here it drops steeply on a wide trail with many switchback bends until reaching the coast road at 9km. From here the route is on a wide jeep track that undulates up and down some coastal bays until it passes Lara Bay. From here it is flat and partially downhill to finish on the beach, where you will finish with a ‘splash’.
* race is also open to running not participating in the full 4 day challenge

On the last day, 25/11 and after having completed the half marathon, which by most is characterised as the highlight of the event, we leave mountain “climbing” and trail runs behind us and head for the city of Paphos, where runners compete in the fairly flat 10k Paphos City Run. Despite not being a cross country run, the 10k Paphos City Run remains an equally beautiful event that starts and finishes at the Paphos Castle by the small fishing harbor. The race is also open to participants not running the full cyprus challenge.

Beer, music and of course the joy and pride of having finished 4 tough days during which runners were challenged through cross country routes as well as asphalted roads in a combination of mountain running and trail running, create a lovely partying atmosphere at the finish of the 10k Paphos City Run.

The event comes to an end with a “grant” gala dinner where all prizes are awarded. During the ceremony, photos as well as video clips are played making the cross country running challenges faced the previous four days during the mountain runs and the trail runs, a sweet memory to be proud of.

* Day 3 and 4 races are also open to runners not participating in the full 4 day challenge event.
* Running with friends?? Register for the team challenge – form teams of 3 or 4 persons.

More information can be found at www.cypruschallenge.com