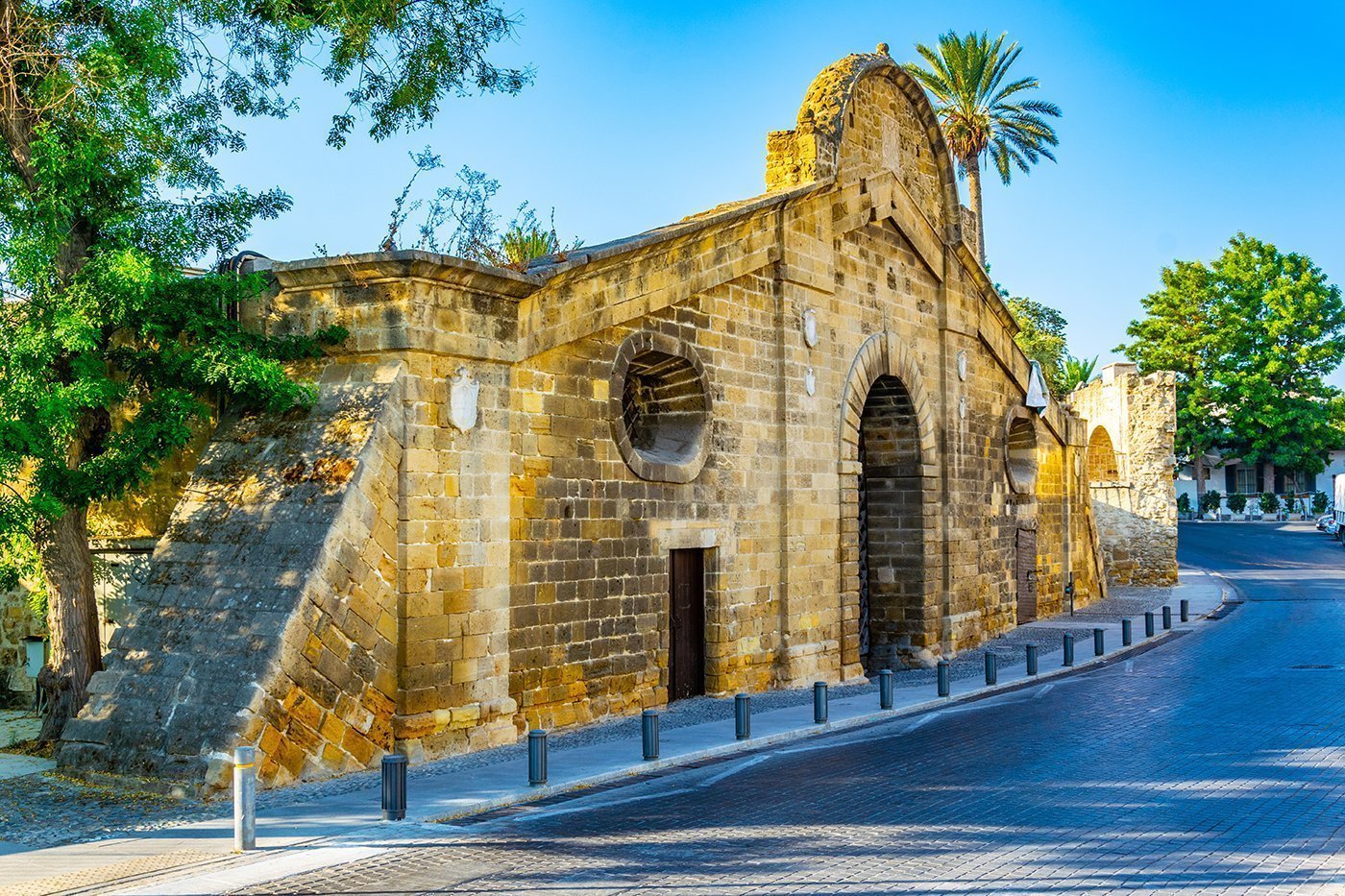 It is Cyprus’ biggest district with an area of 2,710 square km and a population of 327,000. The district’s main urban centre is the town of Nicosia which is also the capital of the Republic of Cyprus. The town is the world’s only divided capital as one section has been under Turkish occupation since the 1974 invasion. For visitors, it serves as the best place to stay in order to visit the attractions outside the capital. Among those worth a visit, particularly if you do not have many days available, are the archaeological site of Tamasos with the royal tombs (25 km.), the Monastery of Macheras on the slopes of Kionia with the miracle-making icon of the Virgin Mary (43 km.) and Asinou Church (53 km.) which was built in 1200. The frescoes were painted a little later. Since distances in Cyprus are small, you can visit the Troodos wine villages (see Troodos region), particularly Omodos (95 km.) and of course Platres (89 km.)

Cyprus’ biggest city with a population of 240,000 and the administrative capital of the Republic of Cyprus, Nicosia has managed to harmonically combine the old with the new and the past with an optimistic approach to tomorrow. The historical section of the town (a part of which is under Turkish occupation) is surrounded by the Venetian Walls which are an integral part of the town. Their main characteristic are the bastions in the shape of a heart and the moat (without water and with lush vegetation) which today is an area for strolls and hosts outdoor exhibitions and children’s play areas. Take a familiarization stroll of the Venetian Walls and make sure to stop at the finest of the Gates of Venetian Nicosia, Famagusta Fate, which has an impressive façade.

Continuing the walk along the small street Ad. Korai, explore the small galleries operated by and hosting contemporary artists. You are certain to find something interesting. We suggest Korai Project Space (Ad. Korai 6-8, 97871717) or S:2F2 (Iracleous 7Α, 22430407), and of course there are many others. At the end of street is the historic Ayios Ioannis Church and the Byzantine Museum with the richest collection of Byzantine art in Cyprus (situated within the Archbishopric). Opposite is the Pancyprian Gymnasium, the Folk Arts Museum and the Struggle Museum. Before the road takes you to the shops and restaurants on Ledra and Onasagorou Streets, stop off at the mansion of Dragoman Hadjigeorgakis Kornesios (1793-1808), one of the most representative examples of urban Cypriot architecture of the 1th century (Patr. Gregoriou 20, 22305316).

The shopping streets of Ledra and Onasagorou are also important in the social life of the old town and the city more generally. Small restaurants, cafes, little bars and all kinds of catering establishments, traditional and modern, create an unforgettable atmosphere from morning through to the night that should not be missed. During the walk, make sure to pass by the 16th century Hamam Omerye and if you are fans enjoy their facilities.  Returning to the Venetian Walls heading towards Nicosia of today, you will come to Eleftheria Square. Even though its revamp is still not finished, it offers young and old an opportunity for a relaxing stroll and is the departure point to get to know modern Nicosia. Bearing the signature of the architectural firm of Zaha Hadid, the square aspires to give a modern touch to the capital and boost its vitality. Nicosia outside the walls may not have the concentrated animation of Ledra and Onasagorou, but there are several busy areas during the day and several others well known for night entertainment. Depending on whether you like shopping for brands (everything is available) or food or the cosmopolitan atmosphere, you will find what suits you.

An evolving city such as Nicosia could not remain on the sidelines as regards entertainment and especially night life. Only the fact that for several years now the city has been gaining ground as a student town, has meant that there are dozens of café and bar restaurants which bustle with life, both at lunch and dinner. The experience is further enhanced in the evening with interesting bars and eateries serving Cypriot as well as modern cuisine of every ethnic origin. The scene is complemented with lavishly designed venues for those keen on a social life, and restaurants offering high quality dishes which have been awarded the Toque d’Or or the Cypriot Cuisine Award.

WALKS IN THE TOWN AND IN THE ENVIRONS

It is Cyprus’ most important museum. A visit offers a journey into the history of Cyprus, from the prehistoric age to the early Christian era, through important and impressive archaeological finds that relate the Neolithic era, the Bronze age, the Iron age and the Greco-Roman period. Among the highlights is the statue of Aphrodite from Soloi and a collection of gold jewellery and other finds from the royal tombs of Salamina. Tel 22865854.

The collection was donated to the Cultural Foundation of the Bank of Cyprus and features a wide range of exhibits from the early Bronze Age (2500 BC) to the Middle Ages. A large number of exhibits are ceramics, examples of the Mycenean, Geometric, Archaic, Classic, Roman and Mediaeval periods. There is also an interesting collection of jewellery, sculptures, seals and other finds. Tel 22128157.

More than 10,000 exhibits showcase the history of the town and the social evolution of Nicosia thanks to a number of well-organized exhibition sections which cover 4000 years, from antiquity to 1960.  Tel 22661475

The gallery houses three permanent collections: a) the Paris Collection with works from a wide range of European art of various artistic schools and techniques dating from the 17th to the 20th century, as well as period furniture and art objects b) the Greek Collection which is made up of works of important Greek artists of the 19th and 20th century  and c) the more recent Cyprus Collection which focuses mainly on work of first generation Cypriot artists from the start of the 20th century to the 1930s.

The capital’s most beautiful park covers an area of 8,400 hectares. A visit is a relaxing and enjoyable experience with trails through the vegetation and along the shores of the lake. There are two picnic areas, cycle lanes, footpaths, a Visitors Info Centre, a bird observatory, a botanic garden etc. Near the southeast entrance of the park, immediately after the Karaiskakio Foundation, there is an open-air café with drinks and snacks.

In 2017 the museum was awarded the Grand Prix of the European Union for Cultural Heritage/ Europa Nostra 2017 in the category “Education, Training and Awareness-Raising”. The four storey building, which is a representative example of Ottoman architecture, offers visitors the opportunity to journey from Cyprus of the 18th to Cyprus of the 20th century.

If you want to watch events hosted in the capital find out what is on from the programme of Nicosia Municipal Theatre (22797000). Note also that the Cyprus Theatre Organisation has two stages and also screens Nt Live performances (77772717). The impressive Shoe Factory (22663871) hosts important classical music concerts with performers of international repute.

Old Kaimakli (post code 1021) is a neighbourhood of renovated houses and small, tasteful shops of artists and designers.  Look out for the studio of Kristina P (99470415) the accessory and bag designer who is well known not only in Cyprus, the shop and studio of  Georgia Moditi (Gr Digeni 80, 99514374) with women’s clothes in abstract and elegant lines, as well as the studio of the glassmaker Malvina Middleton ( Makarios Ave. 78,  99431428). Visit the model weaving workshop of Julia Astraiou Christoforou, housed in a listed 19th century house next to the Church of Ayia Varvara (Ay Varvaras 1, 99475219).