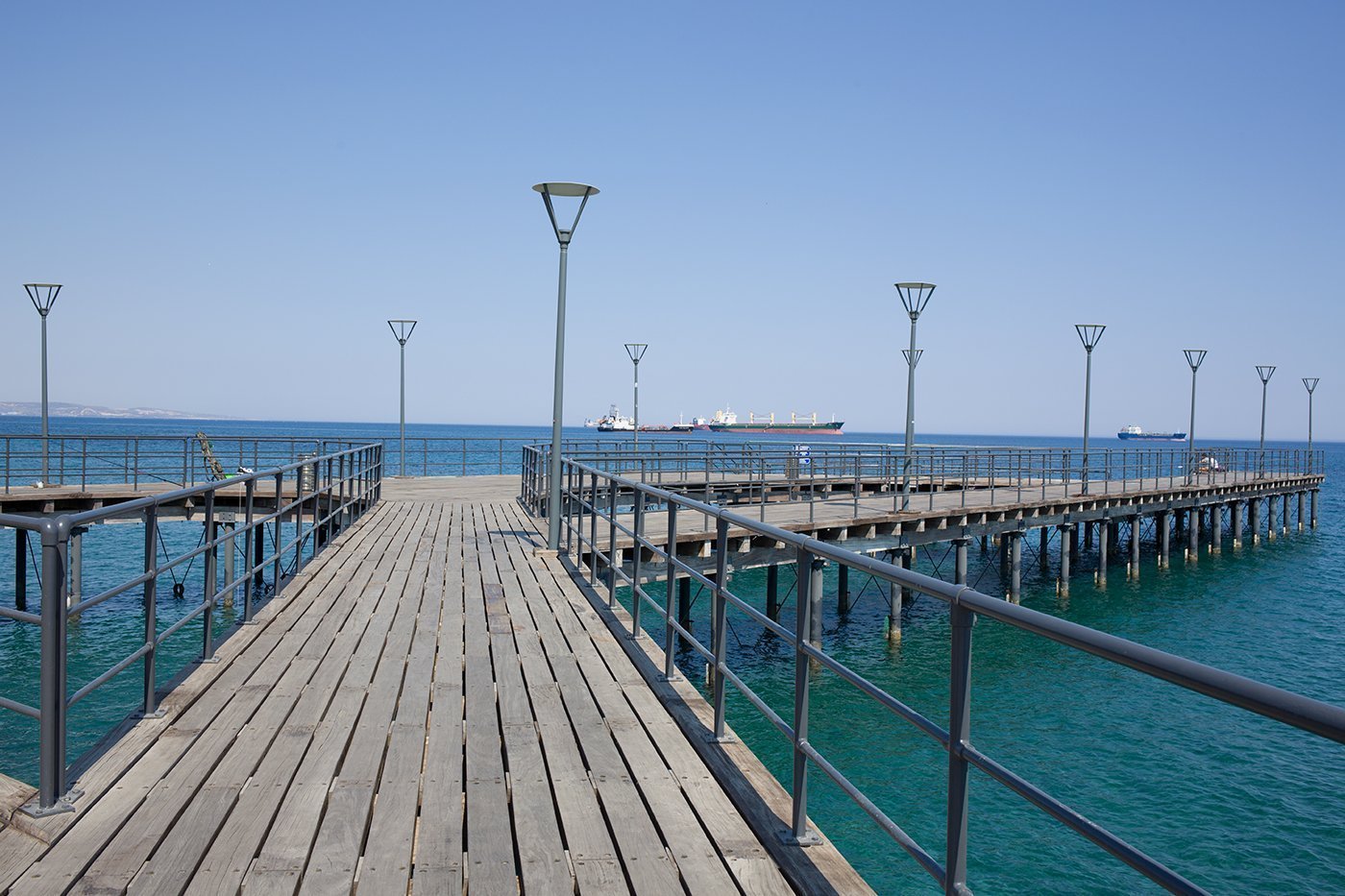 It is the third largest district in Cyprus with an area of 1,393 square km and a population of 235,000. The focal point is the town of the same name which stands out for its cosmopolitan character and in recent years has monopolised the interest of Cypriots and foreigners because of the rapid building development and the important infrastructure projects which have turned it into an important financial and tourist centre. Both its 50 km. coastal front and the broader region are a magnet for visitors with significant sights and monuments of historical importance well worth visiting. Using Limassol as a base, visitors can visit attractions of great interest. Top among them is the archaeological site of Curium (18 km.) with a superb Greco-Roman theatre, noteworthy mosaics (5th century AD) and many other monuments. The Limassol wine villages (see Troodos region) are also of significant interest, focused on picturesque villages such as Omodos and Vasa (40 km.) etc. Of course, there are many others scenic villages (mainly in the Troodos area) to visit if there is enough time, with chief among them possibly unique Platres.

The tourist season peaks in the summer months. Nevertheless, there is no better season to enjoy the town on foot than in spring and autumn, without the high temperatures that would impede your strolls.

Limassol is the second largest town in Cyprus and the southernmost in Europe. Built amphitheatrically on Akrotiri Bay, it is located between two ancient cities – Amathus in the east and Curium in the west. Limassol of the new era has changed from the not too distant past. Multi-storey luxury buildings rise into the sky and a modern commercial centre with large roads and shops with a cosmopolitan air that are delightful to discover, embody the Limassol of today. The picture is complemented by the five-star hotels, located in succession on the town’s coastal front. At the same time, Limassol manages to preserve its oldest part, the historical centre, which starts from the narrow streets near the Old Port and extends east and has been significantly upgraded in recent years.

The town which has become synonymous with fun and entertainment because of the carnival, continues to shine with noteworthy restaurants, beach clubs open late into the night, noisy bars which host daylong parties and more alternative options in the historical centre. Limassol marina is a hub, with restaurants and tasteful bars on the seafront which attract local and foreign guests. Just a few metres away from the sea, the old town also bustles with life with crowds of people converging onto every narrow street in search of the ideal destination. This will most likely be situated on noisy Saripolou which is home to some of the most popular bars, in Iroon Square and in the surrounding areas. At the same time, the multi-starred hotels on the town’s seafront host some of the best award-winning restaurants in Cyprus that you absolutely must try.

The town of Limassol, which in recent years has expanded towards the suburbs, and the villages which are only a few kilometres from the centre, are ideal for excursions, combining a swim at one of the organized beaches, tours of picturesque villages and visits to attractions. To start with, it is worth taking a long walk in Old Limassol. You will encounter buildings of unique architectural character, traditional shops, the old market and much more. At the same time, you will discover charming restaurants and bars to enjoy interesting dishes from Cypriot and other cuisines as well as refreshing cocktails. Saripolou Square is also very interesting.

The castle is a landmark in this paved, pedestrianised area that bustles with life and has a number of cafeterias and restaurants. It is said that it was built in 1193 by the founder of the Lusignan dynasty, and according to tradition this is where the wedding was held of Richard the Lionheart with Berengaria of Navarre who he then crowned queen of England. Today it houses the Mediaeval Museum of Cyprus.

It hosts collections of clothes, embroidery, wood carvings, rural and agricultural tools and utensils, jewellery, ornamental items and furniture of the end of the 19th beginning of the 20th century. Some of the exhibits are carved wooden trunks, chests of drawers, stands, picture made with silk cocoons, embroidery, looms, traditional costumes, baskets, swords, bronze pots, spindles and spinning wheels while the vest collection is one of the finest in the Greek domain.

The Katholiki Church (Panayia Pantanassis) is located in the historical centre. This three-aisled cruciform basilica with a central dome was built in 1954-1958 on the site of an older, wooden roofed church. Opposite is the Town Hall, whereas if you go as far as the shopping street (Anexartisias) you will come to the imposing Limassol District Office which was built by the British in colonial style.

The completion of construction at the Marina and old port of Limassol brought a radical transformation to the city which has acquired a new point of reference. Start your stroll from the Molos, walking along the superb cyclical pier to the Old Port where the high rises are literally on the sea, and continue towards the marina which looks like a whole town, since it hosts shops, houses, apartments, spa and places of recreation. The Molos is also the ideal departure point for a bicycle ride on the coastal road, along the special cycle lanes that run parallel to the main road for 15 km. Bicycles are available for rent at various locations.

The centre is located in the heart of the historical centre, in the narrow cul-de-sac of Salaminos Street, south of adjacent Ayios Andreas street. They are the oldest surviving warehouses in the town and were listed as protected buildings in 1995. Chronologically they represent the change from the Ottoman period to British colonial rule. As Limassol Municipal’s Art Centre it now hosts artists from Cyprus and abroad with the aim of connecting the local with the international art scene.

Amathus was one of the most important ancient city kingdoms of Cyprus and a place of devotion of the goddess Aphrodite-Astarte. Excavations have shown that it was inhabited from the 11 century BC. Visitors can admire a number of archaeological finds including the Agora, the Public Baths and the Temple of Aphrodite. Moreover, there are ruins of a Paleo Christian Basilica and a number of tombs. The outline of the ancient port, submerged in the sea, is visible from the hill.

Located just a few kilometres outside the town of Limassol, Kolossi Castle (one of Limassol’s most important monuments) is a mediaeval fort. Built in 1210 by the Frankish military, it passed into the hands of the Knights Templar in 1306.

It is the southernmost tip of Cyprus and site of Limassol Salt Lake. The Monastery of Ayios Nicolaos ton Gaton, perhaps the oldest monastery in Cyprus, is located there. Tradition has it that it was founded in the 4th century by Saint Helena. According to historians, her son Constantinos the Great sent thousands of cats to Cyprus to eradicate the snakes which had multiplied because of the drought. If you are in the area, the Achaios wreck is well worth a visit. This shipwreck, together with the wild scenery of the area, create a unique enchanting landscape, ideal for photographs. The Salt Lake has a surface of 13.67 km² and is considered one of the most important wetlands in the Eastern Mediterranean, attracting thousands of birds as a resting stop during migration.

Ayios Ermogenis Beach, also known as Curium Beach, is located in Episkopi Bay. It is mainly sandy, with pebbles and the water is of medium depth, suitable for sea sports mainly windsurfing. It is an organized beach with sunbeds, umbrellas and a café/restaurant. A little further at some 100 metres from the Sanctuary of Apollo, through a difficult route you will discover Tripiti Beach, known as Zapalo Beach. A ‘secret’ paradise with fine sand and crystal-clear waters.

It is near Pentakomo village, about 10 km. east of the Limassol’s hotel strip, surrounded by white rocks which extend into the sea. It is divided in two, Governor’s Beach and Kalymnos, both known for calm, clean waters and a beautiful landscape for a nature walk. There are sunbeds and showers available, as well as restaurants serving mostly fish and seafood.

Pissouri Bay is located 30 km. west of Limassol and stands out for its natural beauty, the fine, golden sand, the colourful pebbles and clear waters. There are five public footpaths in the area while the beach facilities include sea sport and a beach volley court. The surrounding area has a range of restaurants, cafeterias, convenience shops and shops. The beach is a sea turtle nesting beach.

The beach along the east side of the cape owes its name to the mare of a governor during British colonial rule which he used to ride along the beach. Today the beach is known among locals for the shallow and clear waters and the restaurants which serve mainly fish. Some have their own additional facilities such as inflatables and a children’s play area.

The one kilometre beach at Dasoudi is in the heart of the tourist area of Limassol and is one of the city’s most popular swimming areas. Its special characteristic is the small wood next to the beach, giving visitors the opportunity to place their mats in secluded spots, under the shade of eucalyptus, pines and acacias, behind the sandy beach.

NOTE: Distances have been calculated starting from the Mediaeval Castle. To calculate the time needed to get to each attraction, estimate 5-6 minutes for 5 km.