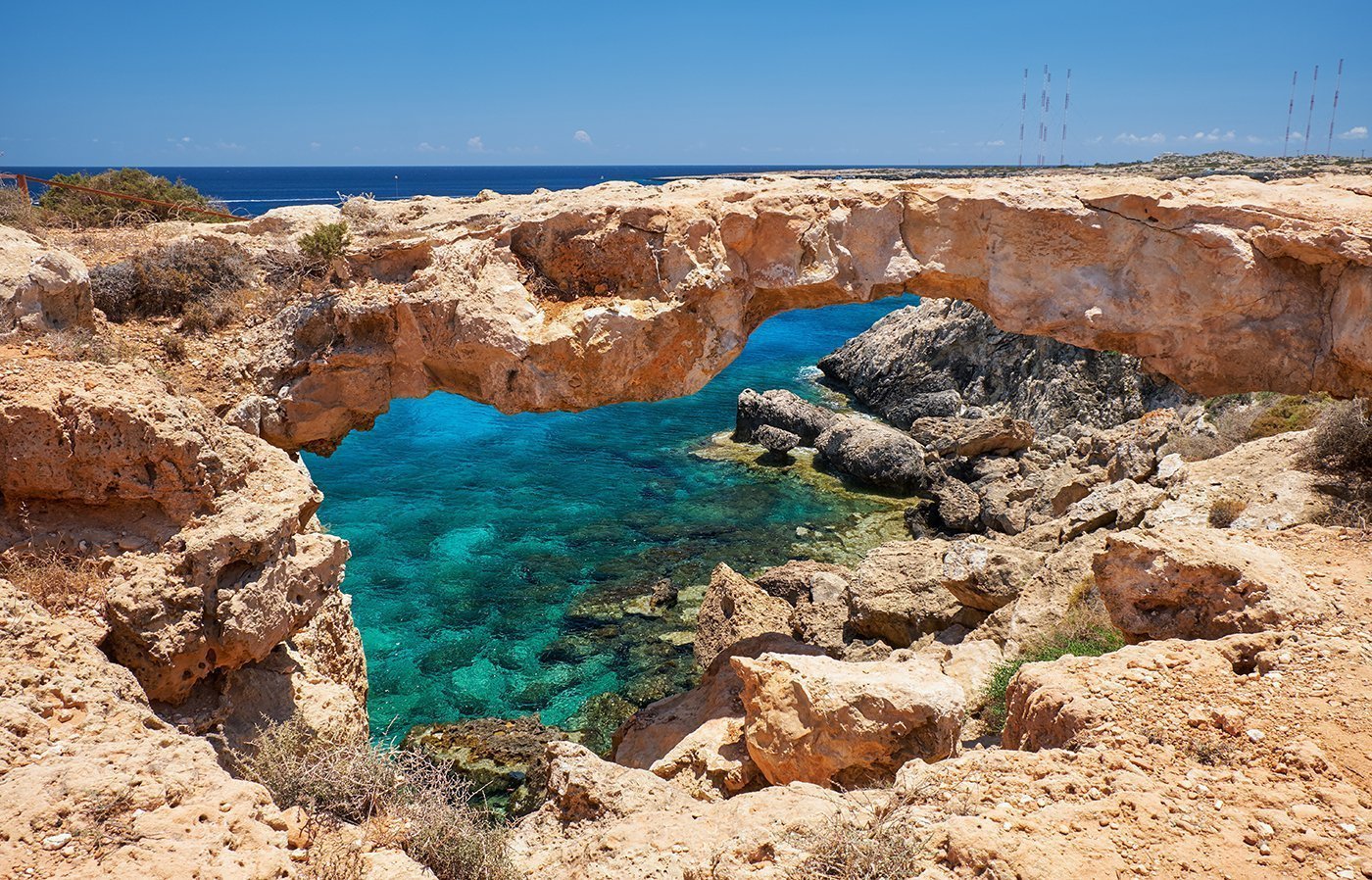 Famagusta district is the second largest district in Cyprus covering 1,985 square km. Since the Turkish invasion of 1974, most of the district’s eight municipalities and 90 communities are under occupation and the Republic of Cyprus controls only the southeast section which has four municipalities and five communities, some of which are only partly under the control of the Republic. The four municipalities under the control of the Republic of Cyprus are: Ayia Napa, Paralimni, Derynia and Sotira. The population of the free Famagusta area based on the 2011 census is approximately 46,000.

The free Famagusta areas are made up of lowland with two faces – the primarily rural hinterland and the lively, bustling coastal zone famous for its wonderful beaches and crystal-clear waters. One example is Fig Tree Bay, which featured in the 2019 list of the top 50 beaches in the world, the famous resort of Nissi Beach, one of the most famous beaches in the area and the protected Cape Greco national forest park.

The wider area of free Famagusta is popular and bustles with people during the summer. Visitors start arriving in May and the last guests leave at the end of September early October, weather permitting. If you like lots of people and holidays with a strong buzz and beat, the summer months are the right time to go.

Alternatively, if you are among those looking for peace and quiet, good food and beaches with a few people, opt to visit in spring through to the beginning of June. Moreover, with temperatures quite high, the last weeks of September are an ideal period for relaxed tourism in the area.

Up until 1974, Famagusta was the capital of the district of the same name and the third biggest town in Cyprus, with rapidly growing of 40,000. Today, activities are mostly concentrated in Paralimni and Ayia Napa.

The twin focus of interest in the government-controlled areas of the district are Paralimni Municipality which is the most densely populated and Ayia Napa Municipality which, with its foreign visitors, has given its name to the whole area.

Ayia Napa was initially a small village with roots in the 15th century when it was established with the construction of the monastery of the same name.  The village developed as a tourist destination after 1980 and became a municipality in 1991. Its population currently numbers 3,500 to 4,000 residents. The heart of the village is the central square where Ayia Napa Monastery, one of the Municipality’s many attractions, is located. Besides its many attractions, Ayia Napa is known for its bars and clubs which give it a cosmopolitan character and which together with its very beautiful beaches, make it an ideal holiday destination.

Paralimni, together with its suburb Protaras, is an equally important holiday destination. It owes its name to a small seasonal lake which is located between Paralimni and Sotira. Paralimni was established in the Byzantine period with the amalgamation of a number of small agricultural communities. The village grew rapidly with the development of tourism and the municipality’s current population is 15,000. The focus of Paralimni and an important attraction is the square in the centre of the town which has three churches and is Cyprus’ biggest church square. Like Ayia Napa, Paralimni is known not only for its attractions and beaches but for the nightlife, for which Protaras is the reference point. Today, Paralimni and Ayia Napa together make up the urban centre of the government-controlled areas of the Famagusta district.

The free Famagusta area and particularly its tourist resorts are probably on a par with other large, internationally established resorts. The area of Ayia Napa and Protaras, primarily, promise unforgettable nights full carefree fun for those who love nightlife. Dozens of bars, discos, clubs and stylish restaurants, taverns and picturesque little taverns make up an entertainment scene that satisfies the needs of all visitors. Even during the day, the beach restaurants on many of the organized beaches set the mood with modern gastronomic options, imaginative cocktails and music that send the adrenaline rushing. Without exaggeration, particularly in the summer months, Ayia Napa never sleeps and never stops offering opportunities for sheer fun. The only question visitors need contend with is, “what do I choose?”.

Ayia Napa Monastery is situated in the centre of the village, carved out of rock and built in the form of a mediaeval castle around 1500 AD, while the old sycamore tree in front of the south gate is believed to be more than 600 years old. When the sun sets, the area is transformed. Hundreds of youths from every corner of the world congregate in the narrow alleys around the central square creating the atmosphere of a large open-air party.

The Ayia Napa Municipal Museum THALASSA was established to showcase the role and importance of the sea in the history of Cyprus from prehistoric times to the present. It houses paleontological, geological and archaeological exhibits as well as exhibits from marine life. These are exhibited in underground showcases or are freely placed in the museum while others hang from the ceiling.

A unique combination of art and local nature, the Sculpture Park is an important cultural project and a new landmark and jewel of the town, the first of its kind in free Famagusta since it was established in 2015. Once a year, artists from every corner of the world contribute with their valuable participation to further enriching the park.

Discover the deep waters of the ocean with a visit to be enjoyed by the whole family. A truly impressive experience where you can admire the wonders of the deep. You will see 400 different types of sea life such as eels, turtles and a huge collection of corals.

Open to the public, it now also serves as a museum. It is within the administrative boundaries of Paralimni and is considered the biggest church square in Cyprus with three churches in the centre of the town. Two of the churches are dedicated to Saint George and the third, which is the oldest of the three, to Saint Anna.

The stone built, Byzantine style chapel of Prophitis Elias is located on a steep hill, a few metres from the heart of Protaras. The church’s location offers a spectacular view of the area. At night, the chapel is floodlit. To visit, you need to climb the 153 steep steps but the view will more than compensate. All along the route, notice the trees bedecked with multi-coloured ribbons, left behind by tourists who tie a ribbon to a tree in honour of someone.

The church is in the heart of Ayia Napa port, known also as Limanaki Square. It is one of the leading tourist attractions in the area and certainly worth visiting.

The protected National Forest Park is east of Ayia Napa and south east of Protaras, in the area of Cape Greco. It is part of the Natura 2000 network and spreads out over 385 hectares of unspoiled natural landscape. The park has a network of nature trails as well as special lanes for cycling with benches along the route. The landscape is verdant, with Calabrian pines and Phoenician junipers. The 2 km-long nature trail Aphrodite passes through the southeast of Cape Greco and is part of the Aphrodite Cultural Route which pays tribute to the island’s link with the ancient goddess.

The area is rich in flora and fauna, as some 400 different types of plant grow here. Of these, 14 are endemic and another 14 are extremely rare. The tiny whitewashed chapel of Ayii Anargyri is also interesting, with steps which lead to a cave close to the sea.

The natural Korakas bridge is the largest natural bridge in Cyprus and one of the most romantic spots in the area. It is situated next to the chapel of Ayii Anargyri, on the road towards Cape Greco. The Forestry Department has fenced the area around it, as the Bridge was in danger of collapsing because of the waves and the roots from bushes which erode the rocks.  Even though access is prohibited, locals and tourists can visit the area and enjoy the enchanting nature.

The Folk Arts Museum and the household equipment and agricultural tools exhibited have been designed in cooperation with the Cyprus Handicraft Centre. The museum shows how functional a traditional Cypriot house could be. At the same time, you can visit spaces dedicated to traditional professions such as furniture maker, cobbler, tailor, blacksmith, builder, barber etc. In the semi-covered exhibition areas, there are traditional items such as a harvesting machine, a threshing machine and other milling equipment, mill stones, stone troughs and more.

There is a small chapel between Ayia Napa and Sotira Municipalities dedicated to Ayia Thekla. The church, painted blue and white against the background of the immense sparkling blue sea, is built next to the ruins of the old church which dates to the 4th century. The view from the spot is spellbinding.

Many justifiably describe Liopetri River as “the fjord of Cyprus”. The white, sky blue, blue and red fishing boats are anchored among the rocks and the wild vegetation and beautiful, scenic landscape brings to mind a Norwegian beach.

The site is situated west of Ayia Napa and is made up of 19 carved tombs, a small sanctuary and an ancient quarry.

The tombs were used during the Hellenistic and Roman period and have been pillaged. Archaeologists believe that the deceased were put in clay sarcophagi which were initially covered with level tiles. Most of the chambers are almost identical, with a rectangular trench in the middle and three benches on the side.

The district has more than 30 beaches with superb waters and natural wealth, most of them organized and easily accessible. We chose the most representative and perhaps the most popular in the area.

The popular Protaras beach, better known as Fig Tree Bay, boasts beautiful fine sand and crystal-clear water. Facilities at the beach include changing rooms, umbrellas and sea sports, while the wider area has a range of accommodation and restaurants. In addition, the beach is accessible to people with disabilities, including a special wheelchair at the lifeguard tower.

The 600-metre Nissi Beach, located 3.3 km west of the centre of the popular tourist resort of Ayia Napa, is among the most famous in the area, attracting large crowds drawn there by the combination of sea, music, bars and parties. Covered with fine, golden sand, the beach is in a natural cove with shallow calm waters, sheltered from the wind.

The 300- metre Nissi Bay Beach, located 3.5 km. west of the centre of the popular tourist resort of Ayia Napa, is famous and considered one of the most beautiful beaches on the island thanks to the small islet close to the shore.

The 200-metre beach of Konnos, located 4 km. east of the centre of the popular resort of Ayia Napa on the road between Cape Greco and Protaras, is one of the most picturesque on the island. The area is covered with pine and other vegetation and the view is breathtaking. The beach offers access to the National Forest Park.

Ayia Triada Beach is situated in Paralimni and boasts beautiful, fine golden sand and crystal-clear waters. Besides the beautiful coastline, there is a picturesque fishing shelter and an elegant chapel dedicated to the Holy Trinity (Ayia Triada) from which the beach took its name.

NOTE: Distances in kilometres are calculated from Ayia Napa