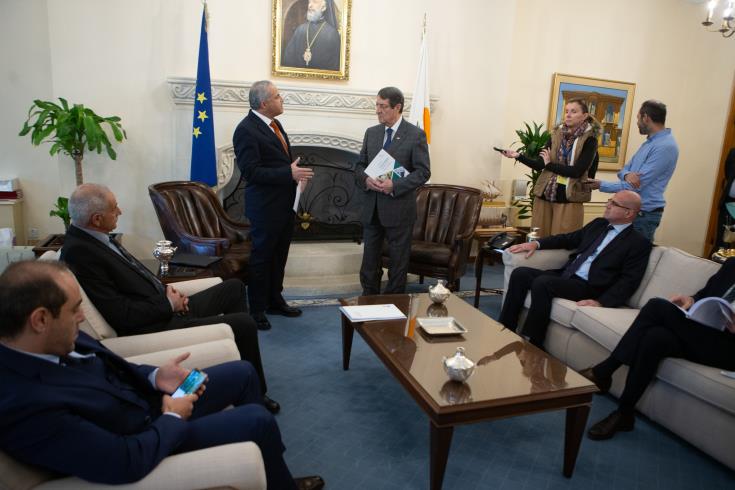 President Nicos Anastasiades said Cyprus is finally in the implementation stage that will allow the transportation of natural gas to the island by 2021.

Presenting the Cyprus Regulatory Authority for Energy (CERA) report to the President, CERA chairman Andreas Poullikas expressed concern over the delay in the arrival of the natural gas.

Referring to the CERA reports which indicate that between 2022-2024 there will be a shortage in the contractual output of around 600 MW, Poullikas said that this shortage is expected to be covered by the licensed conventional producers to date, while they expect another 300 MW of renewable energy in the next one to two years.

The CERA annual report contains the annual report of the Cyprus Transmission System Operator of Electrical Energy. Poullikas said CERA’s purpose is to regulate the electricity and gas markets and that for 2018, work on energy reform in the European framework of the energy union continued. The reform framework for the electricity market is to fully align Cyprus with the EU target model, namely the new competitive market.

The Cyprus Regulatory Authority for Energy (CERA) in accordance with the Natural Gas Market Law Regulation, has the responsibility to promote the development of an economically robust and efficient gas market and to ensure safety, continuity in the provision, Quality and efficiency in the supply of natural gas.

Regarding electricity supply in Cyprus, Poulikkas said that 1500 MW of conventional technology and 300 MW of renewable energy have been installed. CERA, he said, has been tasked with two annual adequacy studies, which have shown that between 2022 and 2024 a contractual deficit of about 600 MW is expected. The reason, he explained, is the increase in demand that is reasonable and the withdrawal of six steam turbines from the power plant in Dhekelia.

Regarding the local electricity market, Poulikkas said that all necessary steps have been taken to harmonise Cyprus with the EU target model.

On his part, President Anastasiades expressed complete satisfaction with the work that CERA is doing. One project which – despite bureaucratic delays and delays due to procedural and other reasons, is in the process of securing market liberalization and gas flow, creating conditions so as to be more dependent on RES. and not by cost-cutting or even polluting technologies. ”

He assured that regarding the advent of gas, “we are now definitively implementing a decision that will allow us to achieve by the year 2021, at least on the basis of the offers before us” the goal.