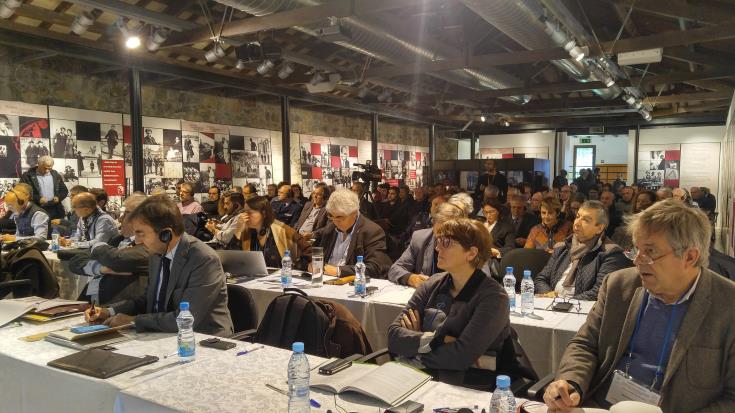 A European Conference entitled “Mountain areas of large Mediterranean islands: European issues, National and Regional policies and local mechanisms” is taking place in the villages of Platres and Omodos, in the Limassol district, between January 28-31, 2020.

The deliberations of the conference got undereay on Wednesday with the participation of 25 representatives from European and international institutions and 35 scientists from seven European Union member states and six Mediterranean islands (Corsica, Sardinia, Sicily, Balearic Islands, Crete and Cyprus).

The conference is being organized by the Presidency of the Republic of Cyprus and the Office of the Mountain Development Commissioner Costas Hambiaouris.

The conference aims, according to the organizers, to acquire experience and accumulated knowledge from other countries with a long tradition in planning and implementing mountain areas-related national policies, which will benefit Cyprus, to contribute actively in enhancing the European policies on mountain areas and to present the Cyprus Mountain Areas Policy and the Mountain Development National Strategy worldwide. This will also enable Cyprus to effectively contribute to the drafting of policies on mountain areas and take advantage of the exchange of experience and knowledge within the European Union.

Speaking to Cyprus News Agency, Commissioner Hambiaouris noted that this is a very important conference which takes place for the first time in Cyprus.

He expressed his satisfaction with the high turnout on the first day of the conference as well as the great interest shown by European and international organizations, government agencies, universities, research centers and Troodos communities.

“The participants will have the opportunity in the context of the Conference to be informed on the strategies and policies being implemented as well as on the mechanisms applicable to different EU countries and Mediterranean islands for the development of mountain areas,” he said.

He also stressed that National Strategy for the Development of Mountain Communities, recently approved by the Council of Ministers at the initiative of the President of the Republic, Nicos Anastasiades, will be presented during the Conference.

“At the same time, we will have the opportunity to exchange views with rapporteurs, gain expertise and open channels of communication with European and international organizations and bodies promoting the development of mountain areas,” he noted.

Commissioner said that the Conference will also allow Cyprus to participate actively in European and international bodies and to have a say on shaping mountainous policies as well as to benefit from the sharing of experience and knowledge and raising funds.

He said that the Conference holds multiple benefits for Cyprus and especially for the mountain communities. The Commissioner also stressed that several businessmen have shown particular interest in the Conference and requested to be informed on the opportunities available for development investments in the mountains.

The “Troodos – Cyprus Declaration” will be released during the last session of the event and will include the conference conclusions. The Declaration will be drafted by the Scientific Committee and will be a political document providing an operational approach, highlighting the particular challenges faced by the Mediterranean island mountain areas and it will highlight the national and regional policies along with local mechanisms beneficial to the island mountain areas.

Much of the discussion on the first day of the Conference focused on decreasing populations in Europe’s mountain areas and inequality in the distribution of services and infrastructure, said a press release issued by the Organizers.

Opening the conference, Laurent Rieutort, Professor at the University of Clermont-Auvergne Ferrand, in France, said strategic policies for the development of mountain areas must be considered over 10 years periods.

“The mountain areas face multiple stresses and need to adapt without ignoring existing challenges,” he said. “We have to believe in the process of change and the local people need to believe and be involved also.”

The lack of coherent mountain policies at local, regional, national and European level was a common theme during the discussion. Chambiaouris  addressed the Conference by outlining the strategies of the Cypriot government’s recently adopted National Strategy.

“This is a policy to welcome new population and new infrastructure for managing communities,” he said.

In closing the day’s session Thomas Dax, Deputy Director of the Austrian Federal Institute of Agricultural Economics, Rural and Mountain Research, said the Conference had highlighted the need for inclusive discussions among each mountain regions and governments.

“It is important to include populations and raise participation,” he said. “From what I’ve heard today we understand there are different stresses with some regions facing population decline and other mountain islands facing saturation from tourism. This produces different needs and regional strategies are important.”

He added that the emphasis should not be on funding opportunities: “It’s not just about allocating money – we need governance to put governance of these issues at the centre. There has to be cooperation internally and we must learn from the experience of others,” he concluded.

The conference will continue tomorrow at the Platres Cultural Centre, and on Friday in Omodos at the Oenou Yi winery.