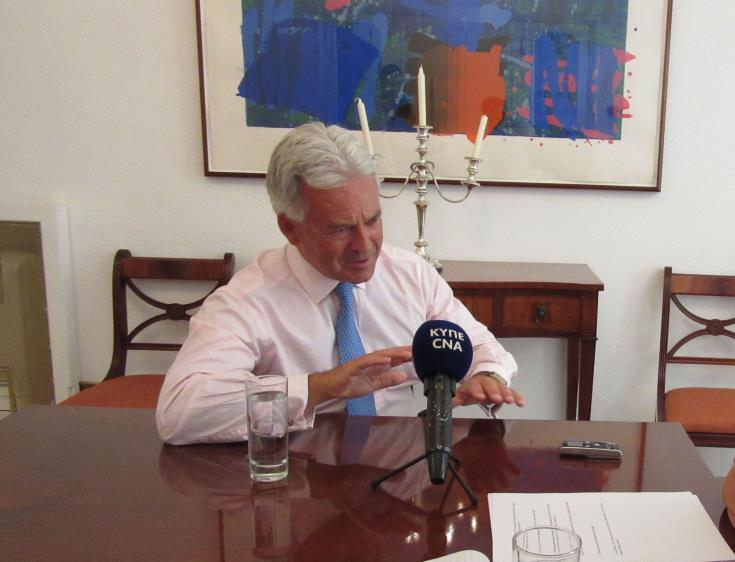 The High Commissioner of the Republic of Cyprus to the UK Euripides Evriviades met the Minister for Europe Sir Alan Duncan on Wednesday afternoon at the Foreign Office to convey the government’s strong objection to the minister’s remarks about Cyprus’ sovereignty being “under dispute” in its Exclusive Economic Zone (EEZ).

Later in the evening the Cypriot Minister for Energy, Commerce and Industry Yiorgos Lakkotrypis told a London audience of investors and entrepreneurs interested in doing business in Cyprus that Turkey’s incursion into the EEZ of the Republic is “not the first provocation we are having, but by far the most serious one.”

Pointing to a map of Cyprus’ EEZ, Lakkotrypis said: “The spot where Turkey is trying to drill is 37 nautical miles off the coast of Cyprus. I am wondering if anyone under any circumstances through the UN Convention on the Law of the Sea can consider this area, 37 nautical miles from the coast, a disputed area.”

Foreign Office sources claimed that Tuesday’s statements by Sir Alan and by officials should leave no doubt about the UK position.

A clarification issued on Tuesday evening by the Foreign Office stated that the UK recognises the sovereign right of the Republic of Cyprus to exploit oil and gas in its “internationally agreed” EEZ.

The area where Turkey threatens to start drilling has not been delineated, therefore under the law of the sea it is considered “under dispute”, goes the British argument.

The sources also say that Sir Alan Duncan’s statement amounted to a call for Turkey not to proceed with exploratory drilling in that area, since the UN Convention on the Law of the Sea prohibits such activity “in an area where sovereignty is under dispute”, as the Minister for Europe put it.

CNA understands that Sir Alan has also expressed his frustration over the intense criticism addressed personally to him by Nicosia.

Diplomatic sources disputing the British argument note that the UK has not condemned the Turkish incursion into the Cypriot EEZ as it ought to and as other western countries have done.

Furthermore, international energy experts in London have underlined the fact that the said maritime areas have not been delineated due to Turkey’s rejection of Cypriot calls for talks on the matter.

They have also stressed that Turkey cannot selectively refer to the UN Convention on the Law of the Sea, a Convention to which it has chosen not be a signatory.

Turkey, has also been noted, is the sole country that votes every year against the Omnibus Resolution of the Law of the Sea item in the General Assembly of the United Nations.

Meanwhile, Conservative and Labour MPs have written to the UK Minister for Europe urging him to unequivocally condemn the Turkish incursion into Cyprus’ EEZ and to  declare London’s support for Nicosia’s right to exploit the natural resources in all its EEZ. Such MPs include Sir Roger Gale, Theresa Villiers and Fabian Hamilton.