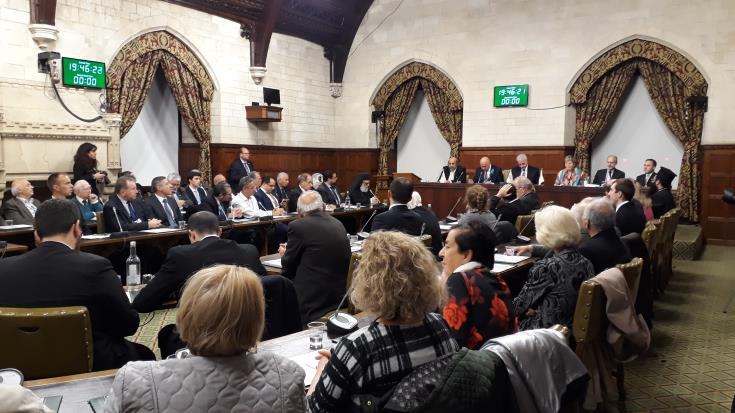 The UK Minister for Europe Christopher Pincher has reiterated his government’s position that no drilling for hydrocarbons should be conducted in waters close to Cyprus and that the Republic’s right to exploit natural resources within its Exclusive Economic Zone should be respected.

He was addressing an event at the Palace of Westminster on Tuesday evening, organised by the Famagusta Association UK, to mark the Republic of Cyprus’s independence anniversary.

“I assure you that you have no better friend than the UK,” Pincher told the attendees, made up of British Cypriots and friends of Cyprus.

He added that the UK government wants to see “an enduring and strong solution” to the Cyprus issue. He noted that while in Cyprus a few weeks ago, he deplored the drilling in waters close to Cyprus.

“We absolutely promote and respect the right of the Republic of Cyprus to drill and explore in its EEZ. We believe the natural resources should be exploited to the benefit of all Cypriots. Turkey should not drill there,” added the Europe Minister.

The Shadow Minister for Peace and Disarmament of the opposition Labour Party Fabian Hamilton said that his party “will work as hard as it can to heal division and bring Cypriots together in one federal state.”

He added that Labour are determined to end the guarantees system and that he has personally conveyed to the Turkish ambassador the message that there needs to be a termination of the occupation with the removal of troops from Cyprus.

He noted that Turkey should not be drilling in the Republic’s EEZ and that the UN should put pressure on Ankara on that issue.

Both  Pincher and Ηamilton described their “shock” at the “devastation and emptiness” of Varosha, and expressed their hope that the lawful inhabitants would one day return to their homes in order “to bring life” back to the area.

The High Commissioner of Cyprus in the UK Andreas Kakouris reminded the audience that Cyprus has repeatedly asked for the return of the fenced off city of Famagusta to its rightful inhabitants as a confidence building measure, and that Turkey has repeatedly rejected the proposal.

The President of the Famagusta Association Dr Vasilis Mavrou stressed the loss of wealth, properties and cultural heritage in the occupied north and noted that “the return of the city of Famagusta to its legal owners and lawful inhabitants will create the conditions for a close cooperation between the two communities, and… will serve as a catalyst and the driving force in reaching a final solution to the Cyprus problem.”

He described Turkish plans to inhabit Famagusta city and the violation of the Cypriot EEZ as “a blatant new invasion”.

Dr. Mavrou also said that many Cypriots regret the UN Security Council’s “lack of political power and will” to implement its resolution regarding Cyprus, and also the UK’s failure to take “serious” initiatives at government level “to honour and implement its legal responsibilities with regards to the island of Cyprus.”

Sir Roger Gale MP, Chair of the APPG for Cyprus, who hosted the event, said that “we do not want any deal, we want a fair deal.” Geraint Davies MP noted that the island of Cyprus should be living in peace and harmony and not with division, whereas Bambos Charalambous MP lamented the fact that Turkey gets ways “with breaking international law time and time again.”