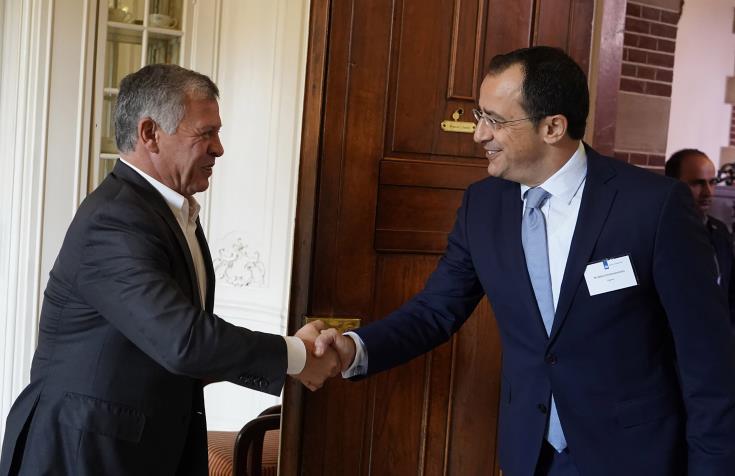 The Foreign Ministers of Cyprus, Greece and Jordan will meet in Cyprus next December to prepare a trilateral meeting of the heads of state, taking place early 2019 in Jordan.

This was agreed during a meeting on Monday morning between Foreign Minister Nikos Christodoulides and the King of Jordan, Abdullah II, on the sidelines of a ministerial meeting on the Aqaba process in The Hague, Netherlands.

According to a Foreign Ministry announcement, the ministerial meeting, aiming to coordinate action in the fight against terrorism, was concluded today.

During the meeting with the King, discussion focused on Cyprus-Jordan bilateral relations, the trilateral cooperation between Cyprus-Greece-Jordan, as well as EU-Jordan relations and the particular role of Cyprus as an EU member in the region.

Christodoulides also had a tête-à-tête with his Dutch counterpart Stef Blok, whose country is a non-permanent member of the UN Security Council, and discussed the latest developments regarding the Cyprus issue, as well as EU-Turkey relations.

While in The Hague, Christodoulides also exchanged views with Deputy Secretary General of NATO, Rose Gottemoeller, and the British Minister of State for Europe, Sir Alan Duncan.

In his intervention at the ministerial session, the Foreign Minister of Cyprus welcomed the initiative of the King of Jordan regarding the Aqaba process, noting its contribution in strengthening international cooperation on the fight against terrorism.

Christodoulides further referred to the important role of Jordan in the wider Middle East, as a stabilizing agent and a credible EU partner.

Terrorism and extremist ideologies have yet to be eradicated, the Foreign Minister went on, adding that Cyprus prefers to invest in preventing radicalization and violent extremism. He also noted that there is a long tradition of harmonious coexistence between the different communities of Christians, Muslims and others comprising Cypriot society.

He also said that beyond the EU, Cyprus also cooperates with non-European partners, providing technical expertise and training in areas such as customs and border control and detecting and handling non-compatible chemical substances.

The Minister said finally that trilateral cooperation mechanisms established by Cyprus together with Greece and countries from the region may contribute in this direction, as they extend to other areas, including security and the fight against terrorism, and remain open for other countries to participate as well.

By In Cyprus
Previous articleU.S. snaps back Iran sanctions, grants oil waivers to China, seven others
Next articlePresident to address the people on Tuesday over decentralized federation proposal