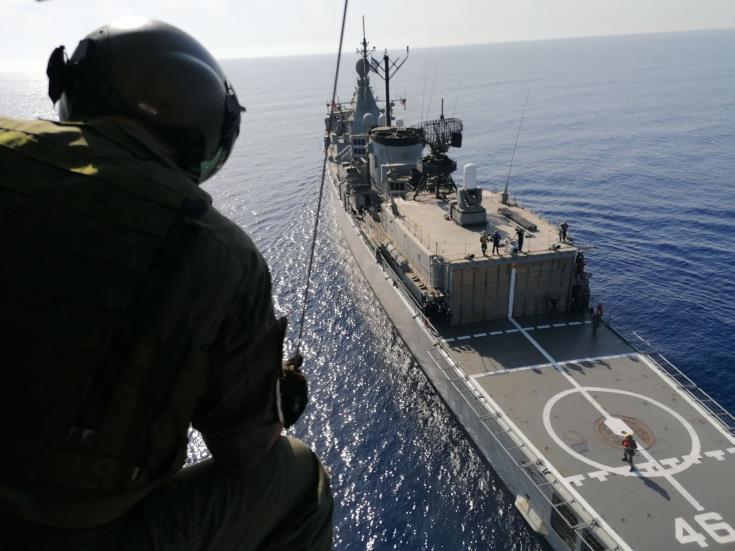 Cyprus, Greece, France and Italy have decided to strengthen their joint naval and aerial presence in the Eastern Mediterranean through a Quadrilateral Initiative.

This is what the Mediterranean island’s Defence Ministry said as the initiative’s inaugural activity, under the name “Evnomia”, is scheduled in the maritime area south of Cyprus from Wednesday to Friday.

It involves naval and aerial assets from all four countries and includes a broad range of naval and aviation exercises as well as Search and Rescue drills.

“Tensions and efforts to destabilize the Eastern Mediterranean through ongoing and protracted conflicts presently taking place have reached a peak, also due to growing friction on various issues” the Defence Ministry announcement said.

“This results to repeated violations of the UN Convention on the Law of the Sea (UNCLOS) and of customary international law, that are binding even for countries that are not signatories,” it added.

According to the Defence Ministry, the Quadrilateral Initiative is a “tangible proof of the shared understanding and dedication to law-based rules, as part of efforts to de-escalate tension through political means.”

The four European countries of the Mediterranean wish to contribute in a reinforced, collective naval presence, based on mutual understanding, on dialogue and on cooperation.

Priority is given, according to the announcement, to diplomatic channels of communication, both on a bilateral and on a European level, as dialogue only can lead to de-escalation in the region.

Defence Ministries and the Military Staffs of all four countries were involved in designing the inaugural activity.

The initiative conveys the commitment of the four European countries to implementing UNCLOS and customary international law, maintaining stability and respect for law-based rules.

It also guarantees the freedom of navigation in the Mediterranean, the Defence Ministry announcement concludes.