Cyprus, Greece and Jordan to work for regional peace and stability 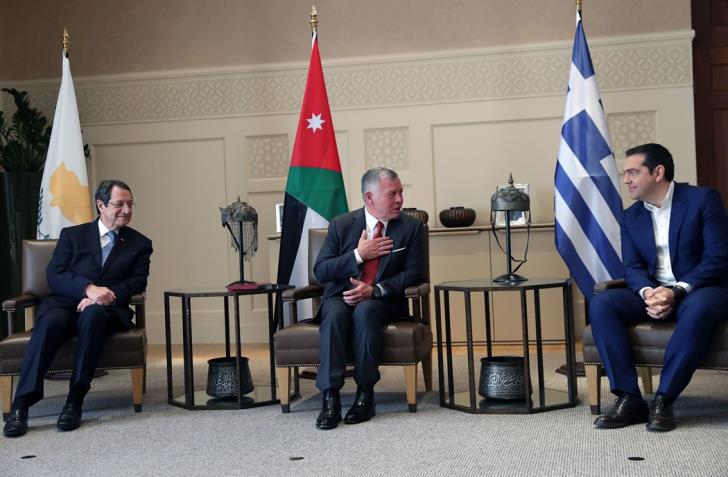 The King thanked Cyprus and Greece for their support, as EU members in relation to regional challenges. He also said their relationship is further strengthened by their joint efforts for peace, stability and security in the region.

Cyprus President Nicos Anastasiades said today’s meeting reflects the importance we attach to further expanding and deepening our synergies to the benefit of our countries, our peoples and the region as a whole.

“Our decision to set up a permanent secretariat in Nicosia to further develop tripartite mechanisms aims to advance the prospects that are opening up,” he said.

Greek Premier Alexis Tsipras said all three nations share the same principled positions, to achieve peace and stability in the region. He also referred to the fallout from the refugee crisis and the inflow of migrants.

Nicosia and Amman signed a memorandum of understanding on research, innovation and technology and a cooperation agreement to fight terrorism, organised crime, illegal transport of drugs and illegal migration.

The three countries – Cyprus, Greece and Jordan –signed a memorandum of understanding on education.

Additionally investment organisations from the three states signed an agreement.

By In Cyprus
Previous articleFacebook down for some users – Downdetector.com
Next articleLunapark parko paliatso closes until investigations conclude