Cyprus, Greece and Jordan to further enhance cooperation, Trilateral Summit to take place in first half of 2021 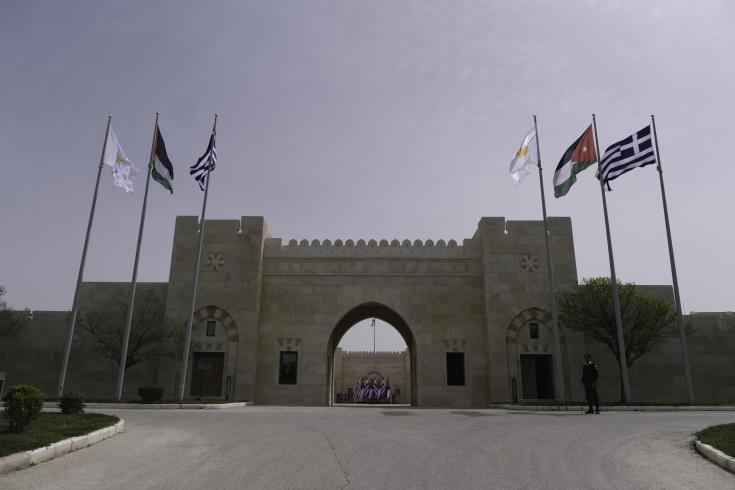 Cyprus, Greece and Jordan have decided to further enhance their trilateral cooperation, which will cover, among other, defence and security issues as well as economic and trade cooperation. The next Trilateral Summit of their leaders will take place in Athens during the first six months of 2021.

The Foreign Ministers of Cyprus, Greece and Jordan, Nikos Christodoulides, Nikos Dendias, and Ayman Al Safadi held on Tuesday in Amman the 4th  ministerial meeting among the three countries. Christodoulides said during his statements delivered after the meeting that they had the opportunity to review the progress that has already been achieved and most importantly to start preparations in earnest for the next Leader’s Summit which is foreseen to be hosted in Athens, in the first half of 2021.

He added that they examined concrete ways in which we could further enhance and expand our cooperation, on the basis always of a positive agenda, for the benefit of the people in our countries, and with a view to strengthening peace, security, stability and prosperity in the broader region.

“Within this context, and given the current circumstances, we agreed on the need to expedite the holding of joint, high level meetings between the three countries on issues of foreign policy, defence and security, as well as to expand our structured cooperation to cover economic cooperation and trade, with the joint engagement in both cases of our competent colleagues,” he noted.

Christodoulides said he was convinced “that the establishment of a Permanent Secretariat for our trilateral cooperation mechanism, in Nicosia, at the beginning of the year, will act as catalyst in the implementation of our decisions and the enhancement of regional cooperation.” He noted that he was grateful to both Al Safadi and Dendias for their support in this endeavor and for responding positively to Nicosia`s call by appointing national coordinators and representatives to the Secretariat.

He also said that the three of them reaffirmed their readiness to jointly visit Iraq at the earliest opportunity, in order to follow up on the promising discussions they have had with their Iraqi counterpart, geared at expanding our cooperation in a “3+1” format with Baghdad.

Christodoulides said that he had the opportunity to brief his colleagues on the latest developments regarding the Cyprus problem and the ongoing efforts by the UN Secretary General aimed at the resumption of meaningful negotiations from where the last process was suspended in Crans Montana, “to which we are fully committed.”

At the same time, he added, “I informed about the continuing illegal activities of Turkey in the Exclusive Economic Zone and continental shelf of Cyprus, as well as on the ground, with the provocative Turkish actions in the fenced area of Varosha, in violation of the relevant UN Security Council resolutions.”

He also said that they took stock of the current state of play in EU-Jordan relations and praised the responsible way in which Jordan has managed the immense migratory pressures, noting that both Greece and Cyprus strongly supported the disbursement of 250 million Euro to Jordan under the EU macro-financial assistance.

Referring to the bilateral relations of Cyprus and Jordan, Christodoulides referred to the imminent signing of the bilateral agreement on the Avoidance of Double Taxation and that Cyprus shall be funding two awareness-raising campaigns by the Jordanian National Commission for Women Committee during the year 2021, as well as a number of other important projects that have not yet been earmarked.

Christodoulides also said that the fact that this trilateral meeting took place with the  three Ministers physical presence, in the midst of this unprecedented pandemic, says a lot about the importance they attach to their cooperation.

“And I have to say, we found many grounds of common understanding and common approach. That is why, among others, we support the institutionalization of this trilateral through the establishment of a permanent Secretariat in Nicosia, and also the expansion,” he noted.

Dendias stressed that “our trilateral and our understandings are not against anybody. They are open to all the countries that accept the same values and share the same understanding: peace, stability and International Law.”

He said that “unfortunately, there is one country in the region – we all know it- that is challenging this basic understanding, these basic premises. And this is Turkey.”

“Turkey acts in exactly the opposite way, outside the bounds of international legality, and having become, unfortunately the local troublemaker. Threatening to use force- it has threatened to declare war against Greece, if Greece really acts on what is its sovereign right, expanding its territorial waters to 12 nautical miles. By instrumentalising the migration issue, by spreading propaganda and fake news, by exacerbating security challenges, by moving jihadists from Libya to the Caucasus-  what I call a `jihadist travel agency` – and endangering peace and stability in all the region,” he noted.

He underlined that “this is totally unacceptable and we have repeatedly called upon Ankara to involve itself in a constructive dialogue with all countries that are law-abiding and share the values that we share.”