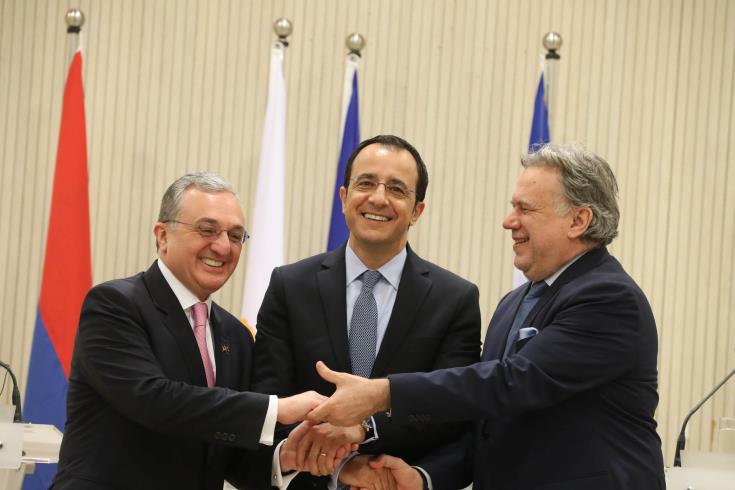 Cyprus, Greece and Armenia agreed to further expand and deepen their cooperation, during the first trilateral meeting between Cyprus, Armenia and Greece at Ministers’ of Foreign Affairs level, held Tuesday in Nicosia.

They also agreed on a trilateral Summit to be held in the near future in Armenia, where the leaders of the three countries will meet to discuss their enhanced cooperation.

In a joint press conference, Cypriot Minister of Foreign Affairs Nicos Christodoulides said that the purpose of the trilateral cooperation between the countries, was the promotion of peace, stability and prosperity through enhanced political dialogue and cooperation among the three countries.

“Today’s meeting reflects clearly our joint determination to further expand and deepen our cooperation and to develop synergies that will benefit our countries and peoples”, he said.

He added that in this regard, the three countries have agreed to explore opportunities for cooperation in various fields of mutual interest, including the economy, trade and investments, agriculture, education and science, Information Technology, healthcare, crisis management, culture and tourism.

He also said that the three countries have agreed to broaden their cooperation within the framework of international organizations and various multilateral fora, highlighting the importance they attach to coordinating the action of the diasporas from the three counties in important decision-making centres worldwide.

Chirstodoulides also said that he had the opportunity to brief his counterparts on the latest developments, regarding the Cyprus problem, as well as on Turkey’s escalated illegal activities in the Exclusive Economic Zone of the Republic of Cyprus, in violation of the Republic’s sovereign rights and international law.

The three ministers, according to Chirstodoulides, also exchanged views on the Nagorno-Karabakh conflict and on the implementation of the Prespa Agreement, and discuss as well, the relations between the European Union and Armenia.

“We have assured Foreign Minister Mnastakanyan of our unwavering support for the strengthening of EU-Armenia relations, both within the framework of the Eastern Partnership and the EU-Armenia Comprehensive and Enhanced Partnership Agreement of November 2017 and beyond”, he said.

In relation to the Partnership Agreement he said that it was expected to be ratified by the House of Representatives in the coming weeks. “Its entry into force will set EU -Armenia relations on a new footing”, he said.

On his part the Armenia Foreign Minister Zohrab Mnatsakanyan, said that the launch of the platform was very important and very promising in amplifying the traditional friendship that exists between the three nations. He added that they were translating that historical friendship into cooperation to the benefit of the three nations and people.

He also emphasized that the objectives of the cooperation were peace, cooperation and stability for the three countries and the region.

Referring to the expansion of the trilateral cooperation he said that Armenia was looking forward to welcome the trilateral Summit, in the near future.

On his part, Greek Minister of Foreign Affairs Giorgos Katrougalos said that the three countries were very like-minded, peace loving countries, which believe that international low and respect of multilateralism form the basis of international relations and they also share a long history.

“We envisaged the improvement of both economic and political relations, the next step is going to be the trilateral summit among the leaders of our countries”, he said.

He added that Greece intended to help Armenia in its European perspectives.

“We promised our Armenia counterparts that we will expend all efforts for the fastest possible outcome for their European aspirations”, he said, adding that Greece would ratify the agreement between EU and Armenia as fast as possible after the elections in the country.

He also said that they agreed to promote efforts for the international recognition of the genocides of Armenians and Greeks.

Regarding the Cyprus questions he reconfirmed Greece’s strong support and solidarity to Cyprus, vis-à-vis the recent violations and provocations of international low by Turkey.
“I can assure my counterpart for our support in the next meeting of the Council of EU”, he added.