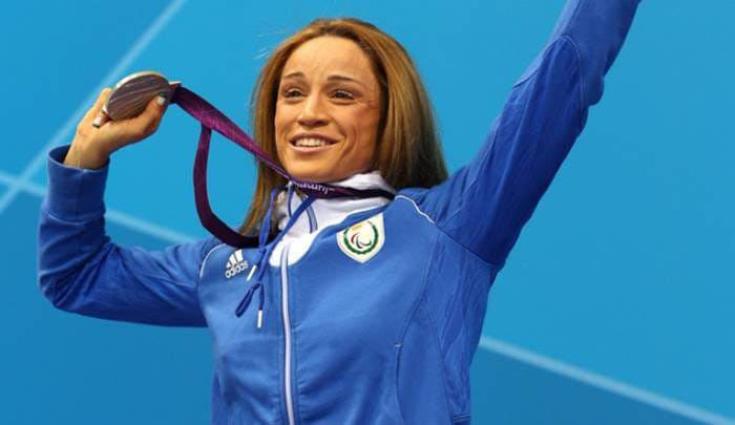 Cypriot Paralympic Gold medallist Karolina Pelendritou said she hoped that in the next years she will see the Paralympic movement grow and evolve and children with disabilities will become more involved with sport and that society in Cyprus will consider them as equal.

In an interview with CNA, she said that there is still discrimination towards Paralympic athletes. She also said that she plans to take part in the Paris Paralympic Games.

“I hope that at some point we won’t need to fight to secure the obvious. It requires work, effort but I think we can all come out victorious through the whole process”, she told CNA.

On her participation at the Tokyo Paralympic Games and her great successes, Pelendritou said it was a very difficult event for herself. During her winning race, she said when it finished, she was not aware if she had won gold, not even her coach was aware. However, shortly afterward she was informed that she had won and when finding out that she broke the world record, “I felt immense joy and satisfaction because these games were special, for many reasons. Special because of them being postponed and because they took place in the midst of a pandemic”, she added.

Pelendritou said that after the Games were postponed, she did not take it very well. “I was psychologically down because I felt that I would have to go through an extra year of grueling training, without any games and it is very hard for an athlete not to take part in events”, she said.

‘Therefore these games were different, there was no audience to offer support, the spirit of the Olympic and Paralympic Games are the people and I had to handle that as well, plus the fact that I am 35 and these are my fifth Paralympic Games, however my experience played a very big role”, Pelendritou added.

The gold medalist also said the change of category was very difficult for her as it meant that she had to compete wearing black glasses, virtually competing in the dark, like she was starting out from the beginning.

She also had to adjust in a very short space of time to this new situation and that was additional stress. “Therefore these Paralympics and my reaction after my victory were so intense because I was carrying all these issues inside me. My reaction was large, satisfaction was greater and I cannot express my joy in words”, she said.

Her plans include attending the Paris Paralympic Games although she is very aware that many things can happen in three years which is a long time for athletes. However, she said she will try to be there.

When talking about her disability, Pelendritou remembered when she was told at the age of 9 about it, she went through a very difficult time because “as a child, you cannot imagine something like that and society was not accepting of people with disabilities”.

She said she became an introvert, and society, other children and the people around her did not handle her in the best possible way. “Not because of malice but because society in itself did not see pictures of people with disabilities”, she remarked. When she joined the Paralympic Games of 2001, that helped her start accepting herself.

Asked if she still believes people discriminate towards athletes with disabilities, she said that although verbally we are trying to convey the message that there is no discrimination, unfortunately, it does.

“And it doesn’t have to be just from the state. It’s in society itself in general. Yes, I think that athletes are not all looked at on the same level, and this is something that we have to look into”, she added.

She also said she was proud for putting Cyprus on the Paralympic map because when she started out, there was not only no Paralympic movement “and no people with disabilities”. She explained that this meant that no person with a disability could be seen dealing in sports. When she got her first Gold Olympic medal in Athens back in 2004, she said that it was the first time Cyprus had won a gold and she took advantage of the moment with all the popularity she gained, to convey the message about the Paralympic movement and what it means for athletes with disabilities.

Seventeen years, later, she added, many steps have been taken. However, we need to make an even greater effort so that people and society will become familiar with disabilities and diversity because at the end of the day this is a win-win situation for society, she said.

“I am happy to be a role model in this respect and try through my career both in sports and outside, to remain on this path”, said Pelendritou.