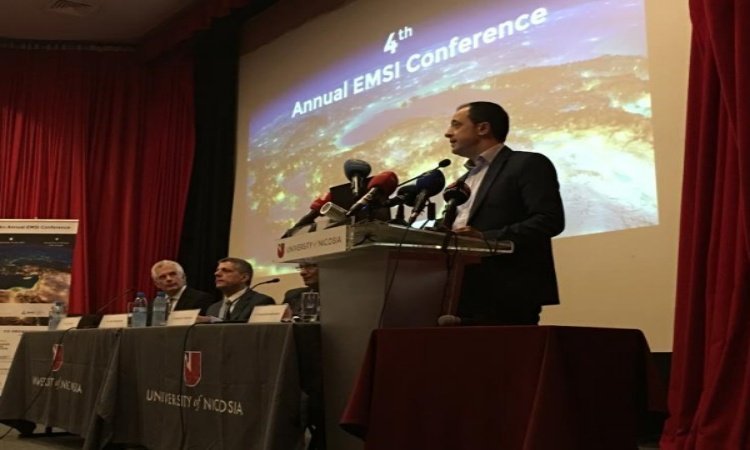 The Eastern Mediterranean is the only region in the world without a regional organization and this is something that we have to work on, Cyprus Foreign Minister Nikos Christodoulides said on Thursday evening.

Addressing the opening of the 4th Annual EMSI Conference, at the University of Nicosia, Christodoulides referred to the geopolitical dynamics of the Eastern Mediterranean and the role of Cyprus as pillar of stability.

As the Minister said, while there are organizations for Europe, the Americas, Asia, Africa and the Arab world, the Eastern Mediterranean is the only region without a regional organization.

Referring to the importance of the Eastern Mediterranean for Europe and the world, the Minister cited a number of factors, such as migration, demographic and social challenges and the region’s energy potential. He also spoke about “the geostrategic value of Cyprus as a bridge between the region and Europe.”

The Minister noted Cyprus’ expanding ties with countries of the Middle East and Gulf regions and made particular reference to the web of trilateral cooperation mechanisms established with Greece and a number of countries, such as Israel, Egypt, Jordan, Lebanon and Palestine.

According to the Minister, energy was the trigger of the trilateral mechanisms and it has continued to be one of their central tenets. He referred, moreover, to the delimitation agreements signed with countries from the region, resulting to greater transparency based on international law and a new economic border structure, as well as to a new framework for dialogue around a concrete shared goal.

He added that trilateral mechanisms are neither exclusionary nor exclusive, nor are they directed against any third country, and they evolve. “We are currently in advanced discussions with some EU member states with a special interest to the Eastern Mediterranean region on their ad hoc participation in certain trilateral cooperation schemes” Christodoulides said. Discussions are also held with Gulf states for creating such mechanisms involving them, with a tailor-made agenda, the Minister added.

Speaking about hydrocarbon discoveries in the region, he said that 2,800 bcm of natural gas have been discovered in the exclusive economic zones of Cyprus, Egypt and Lebanon, when the annual needs of the EU are estimated at 350 bcm.

The presence of energy giants in the region such as ExxonMobil, ΕΝΙ, Total, Noble and Shell are proof of this potential, the Foreign Minister went on and added that “hydrocarbons can become the new coal and steel, in a new regional context.”

Speaking about the Cyprus problem, the Foreign Minister said that a viable solution is a feasible goal and would amplify Cyprus’ bridging capacity. “This would certainly serve the interest of our key partners, of the EU, and certainly of the region itself” he said, noting however that “Cyprus needs to remain a truly independent state, without third-party interference, so as to continue to function as a reliable partner and security provider in the region.”

A round table discussion was held subsequently, with the participation of the Ambassador of Greece Ilias Fotopoulos, the Ambassador of Israel Shmuel Revel and the High Commissioner of India Raghava Krishnaswami Raghavan.

Referring to Turkish activity in Cyprus’ EEZ, Fotopoulos said that Ankara violates the sovereign rights of the Republic of Cyprus and expressed hope that the Turkish government will fall into line with EU decisions.

Revel spoke about the opportunities arising following natural gas discoveries in the region and referred in particular to the establishment of the Eastern Mediterranean Gas Forum in Cairo, saying that this kind of cooperation “is beyond our dreams.”

Raghavan said from his part that “India stands with Cyprus and watches with interest what happens here”, while noting Nicosia’s “immense maturity” while handling the conflict with Turkey.