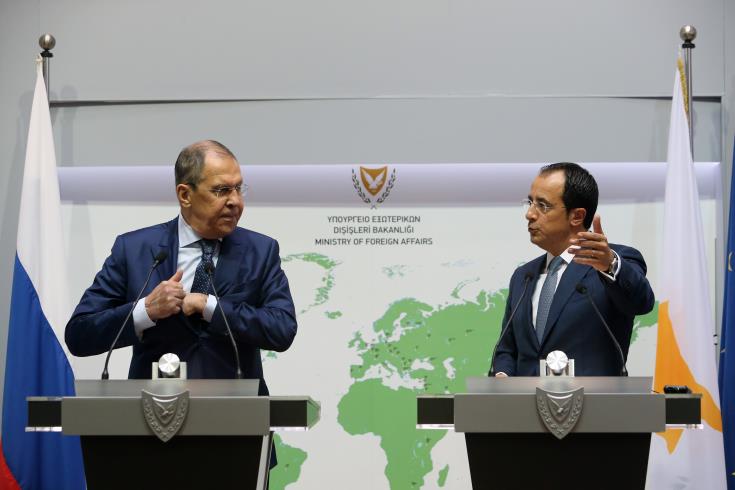 Russia as a permanent member of the UN Security Council and the rest of the P5 must intervene at this point in time for Turkey to terminate its provocative behaviour and for the negotiations to resume where they left off at Crans Montana, Cyprus Foreign Affairs Minister Nikos Christodoulides has said.

Speaking to the press on Tuesday, following consultations with his Russian counterpart Sergey Lavrov, who is visiting Cyprus on the occasion of the 60th anniversary of bilateral diplomatic relations, Christodoulides said that Turkey is violating international law and pointed out the need for the dialogue to resume in proper conditions to yield results.

He also said that he briefed Lavrov on Turkey’s increased public statements regarding the opening of the fenced-off town of Famagusta.

He also said that during the talks they examined the level of the bilateral relations and cooperation and discussed ways to further enhance them in areas such as trade, economy and culture.

Cyprus’ Minister also expressed Nicosia’s concern on the situation in Libya and Syria and briefed his counterpart on the initiatives taken in Lebanon, following the huge blast at Beirut’s port.

Lavrov in his statements via an interpreter said that the bilateral ties go back ages and are well rooted in political, cultural and religious level.

He said that in the 60 years of diplomatic relations the two countries have achieved a lot and want to further enhance their cooperation.

On the escalation of tension in the Eastern Mediterranean the Russian FM expressed his country’s will and determination to provide assistance, via dialogue, if asked to do so by the leaders in the area.

In regards to the Cyprus problem he reaffirmed Moscow’s support for a solution based on the relevant UNSC resolutions and the international law and added that Cyprus does not need guarantors. He also said that there is no need for a change in UNFICYP’s mandate but Cyprus must utter its clear opinion for its future.

Lavrov also said that the issue of Varosha could be resolved in the framework of the resumption of the talks.

In the context of the consultations which took place at the Ministry of Foreign Affairs, Finance Minister Constantinos Petrides and Russian Deputy Minister of Finance Alexey Sazanov signed the Cyprus-Russia Double Tax Treaty, which was amended last month.

In statements, Petrides said that this development will be beneficial for investments, trade and the labour market.

Cyprus, he noted accepted an increase in taxation to 15%, a request by Russia.

He added that a position put forward by Cyprus on important exceptions was also accepted by Russia and gave the examples of insurance companies, provident funds, companies listed in the Stock Exchange with a specific share capital base and the interest rate on government bonds or Eurobonds.