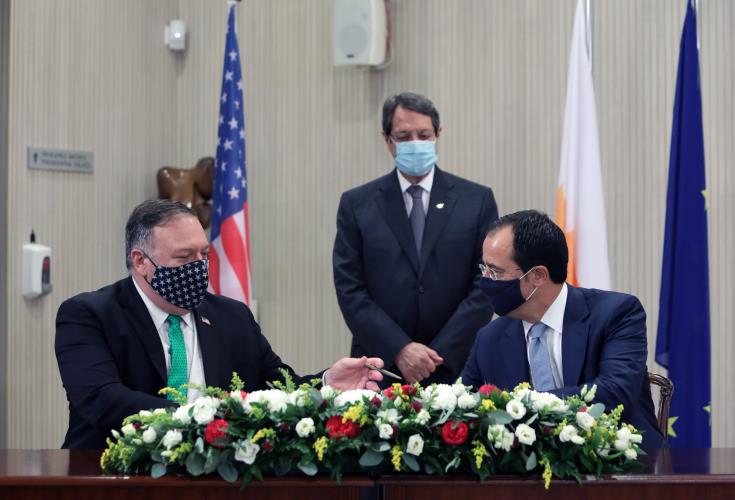 The Minister of Foreign Affairs of the Republic of Cyprus and the Secretary of State of the United States of America signed on Saturday, in Nicosia, a Memorandum of Understanding providing for the establishment of training facility in the coastal city of Larnaca.

The Memorandum was singed in the framework of the bilateral co-operation between the Republic of Cyprus and the United States in the security and defence realm, in order to establish a training facility, in Larnaca, which will be named “Cyprus Center for Land, Open Seas and Port Security” (CYCLOPS), it is added.

CYCLOPS will be a Cyprus-owned facility. An initial funding has already been secured by the US government for the purpose of establishing and operating it.

This initiative falls under the scope of the Statement of Intent which was signed between the two governments in November of 2018.

CYCLOPS is a partnership program, with the US offering expertise and technical equipment, while also contributing in training programs of Cypriot experts and officials, with the aim of gaining the necessary expertise to become trainers themselves for programs which will be on offer to their counterparts from like-minded countries, mainly from the region. These programs will be in such security-related fields as the handling and storage of dangerous chemical/biological/radiological material, port security, border control and cybersecurity, the announcement says.

The Republic of Cyprus will offer the plot of land where the Center will be built and its related infrastructure.  The location has already been identified in Larnaca, in the greater vicinity of its international airport.

By Josephine Koumettou
Previous articleCyprus and UK conducted a joint SAR Exercise on Saturday
Next articleSearch on for bodies in charred path of wildfires, Trump to visit California